The Golden Ring is the name given to Russia’s most famous historical region, a handful of towns around Moscow which have been centres of Russian culture and politics for centuries. We visited four of the towns.

This small town is easy to reach as a day trip from Moscow. The trip itself was quite interesting – our first experience of a Russian local train, it’s a bit like a live version of the shopping channel with vendors walking through the carriage selling everything from ice creams to train timetables to suction hooks. Sergiev Posad is best known for its monastery which is still home to black robed, long bearded monks.

Unfortunately for us, some of the major buildings of the monastery are undergoing restoration work at the moment, so we didn’t see it at its most impressive. 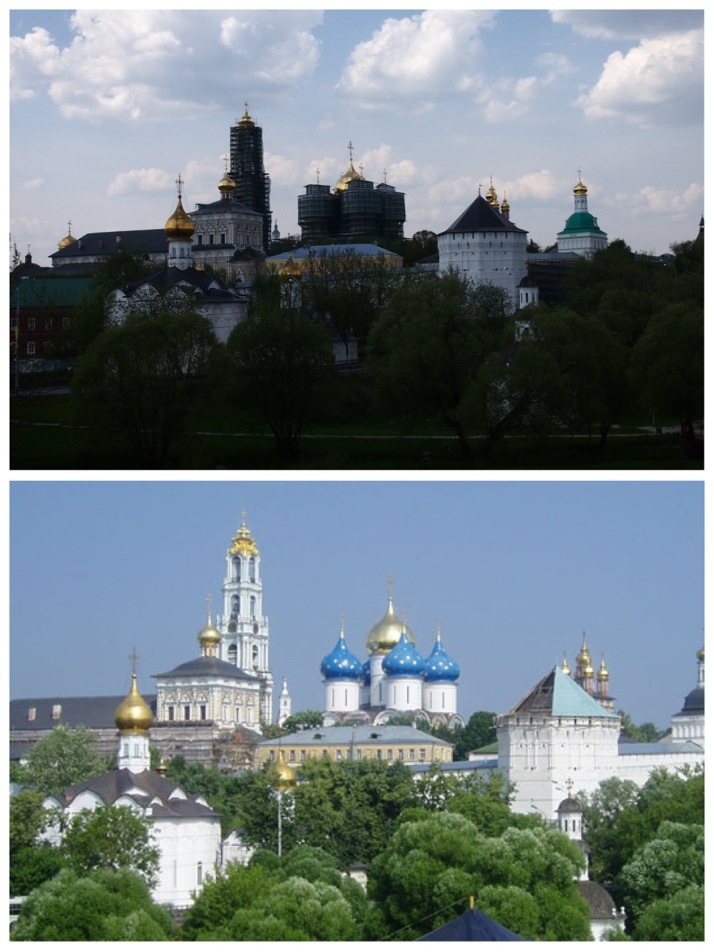 Sergiev Posad when we visited (top) and without the scaffolding

Still the monastery contains some beautiful buildings and lots of visitors are there as pilgrims to visit the remains of St Sergius in the Trinity Cathedral and take home a bottle of holy water from the fountain in the courtyard. We queued up to see the silver sarcophagus and then felt a bit fraudulent not to be crossing ourselves and kissing the lid. 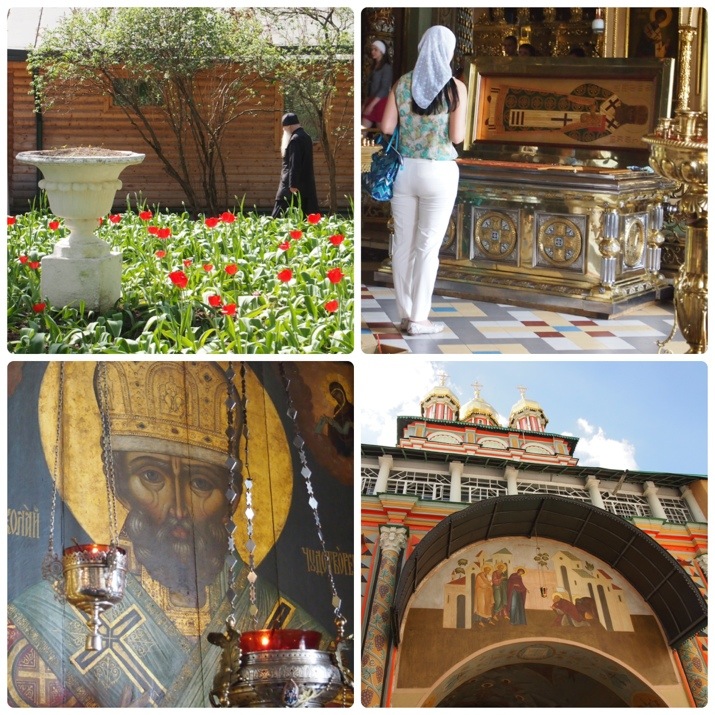 It was a really hot day, so on the way back to the station we had a refreshing glass of Kvas, a local soft drink made from fermented rye bread which is much tastier than it sounds! 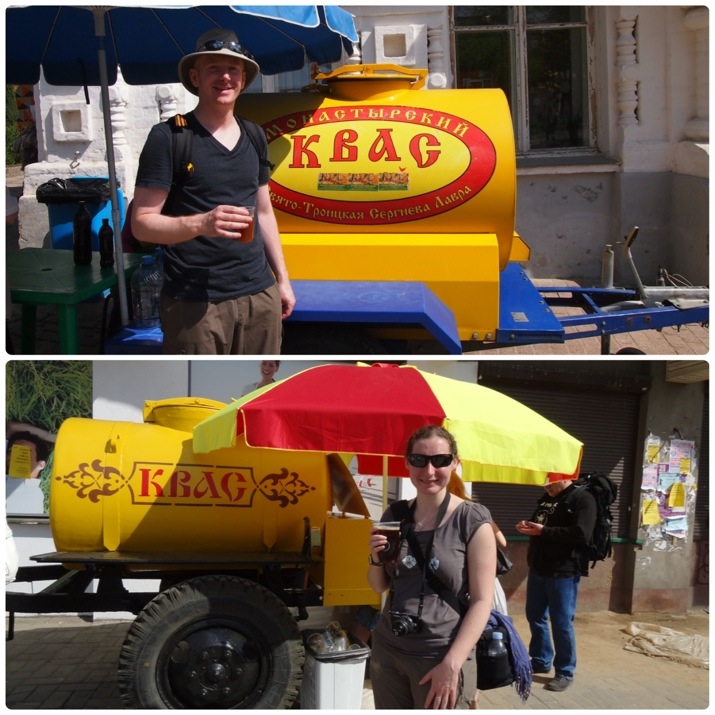 Vladimir was a nice change of pace after the bustle of Moscow. A medium sized town which is not just reliant on tourism, but does have some great historic buildings. We were lucky enough to find an excellent host for our stay here (also named Vladimir). He was not only generous enough to meet us at the train station and drive us to the house, but he and his wife entertained us for an evening of Russian banya, barbecue and conversation (aided by a Russian-English dictionary!). 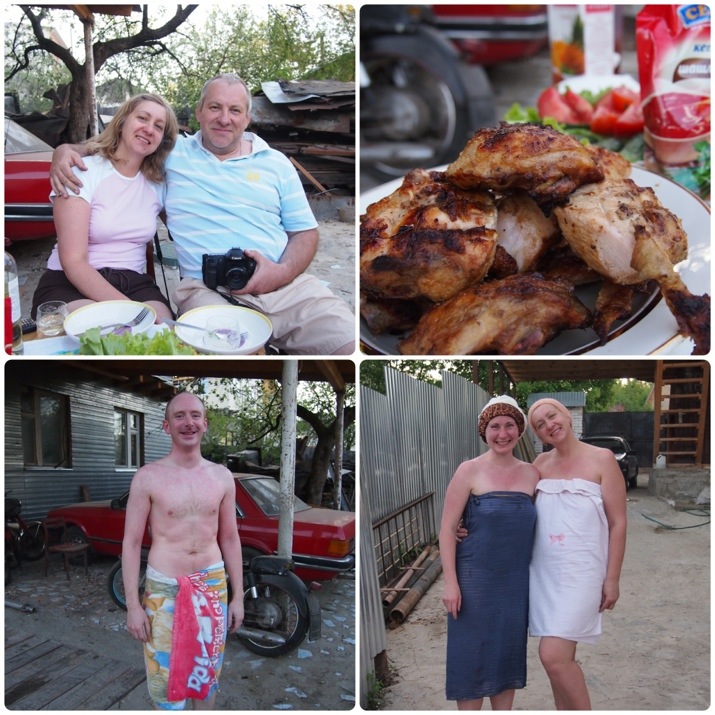 The day that we visited the town’s museums happened to be an open day which meant that they were free but also very busy with locals. The Golden Gate in the centre of the main street is the last surviving remnant of the town’s medieval defences. It now contains a military exposition with an audio visual element which the administrator switched to English for us, much to the confusion of the locals! The town is also home to two cathedrals, the small Cathedral of St Demetrius of Salonica which although plain inside has hundreds of carvings outside, and the beautiful Assumption Cathedral where Russia’s earliest rulers were crowned. 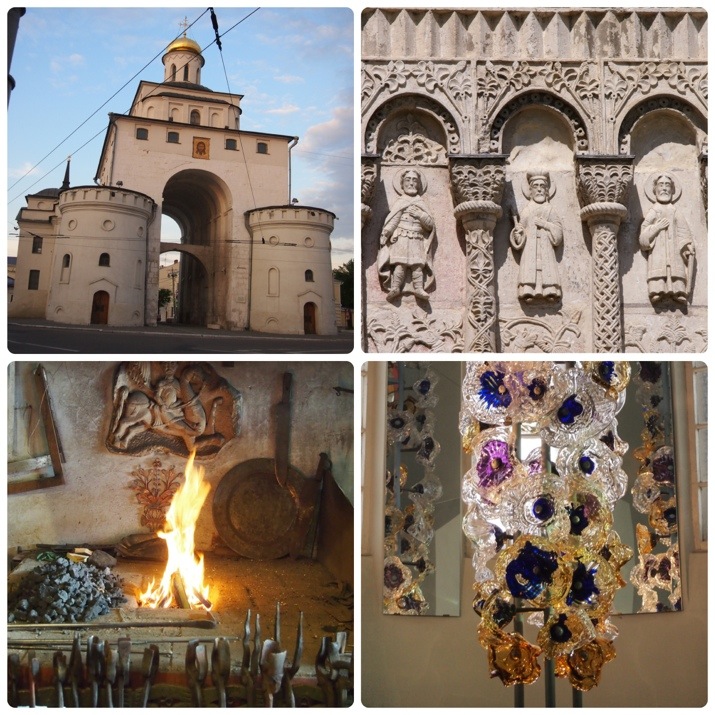 Vladimir museums (clockwise from top left): The Golden Gate, carvings on the Cathedral of St Demetrius of Salonica, glasswork in the Crystal Museum, forge at the blacksmith’s workshop 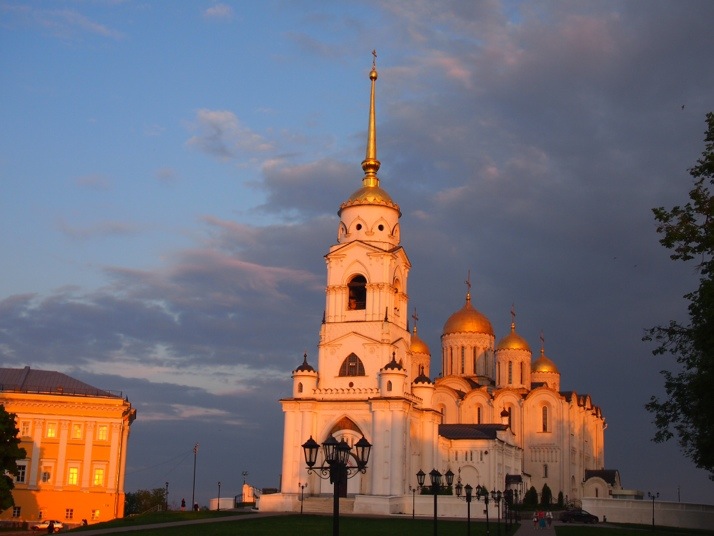 The Assumption Cathedral at sunset

It feels as if every second building in Suzdal is a church – at one time there was a church for every 12 of its inhabitants along with 15 monasteries, and although not all of these survive, there are still a lot left! It’s quite a small sleepy town now, very pretty and easy to wander around. Many of the houses in the town are wooden and some have ornate carvings along the eaves and around the windows. 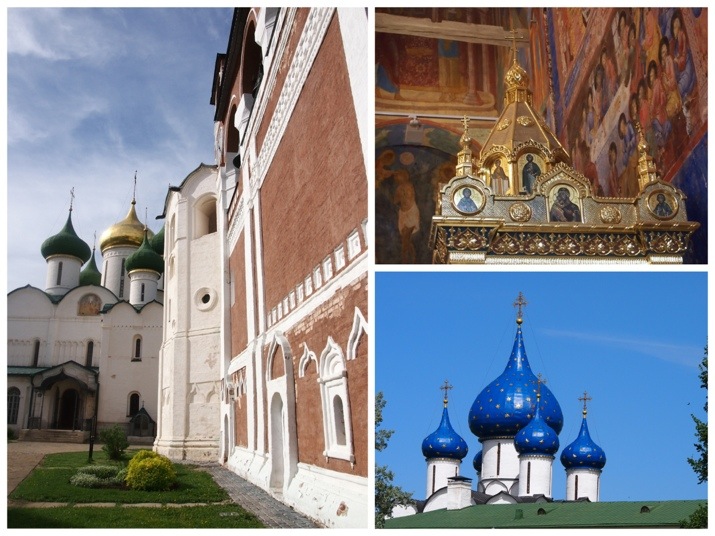 Suzdal also has a small museum of wooden architecture, similar to the one which we visited in Riga. The standout building here is the beautiful wooden Church of the Transfiguration and it was also interesting to see the reconstructions that they have of the building interiors. 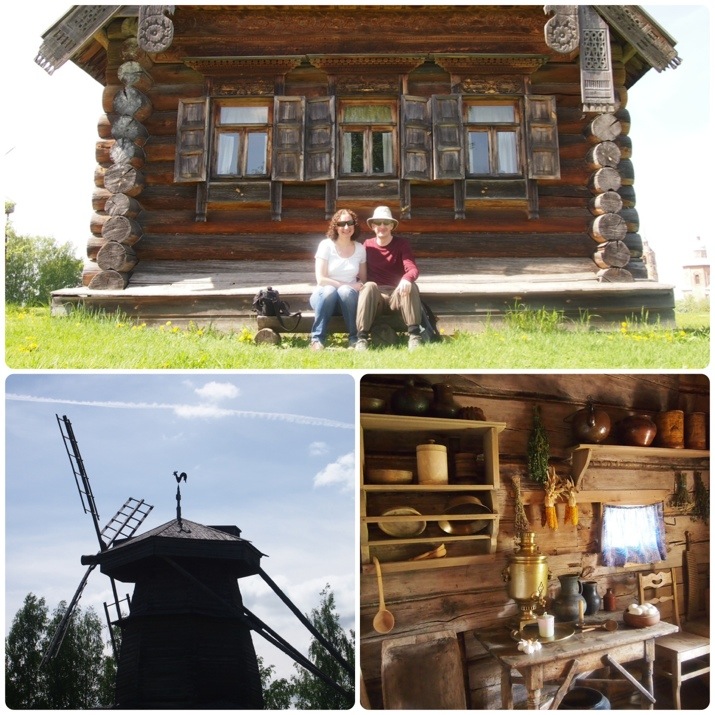 Us outside a peasant’s house, windmill and weathervane, kitchen reconstruction 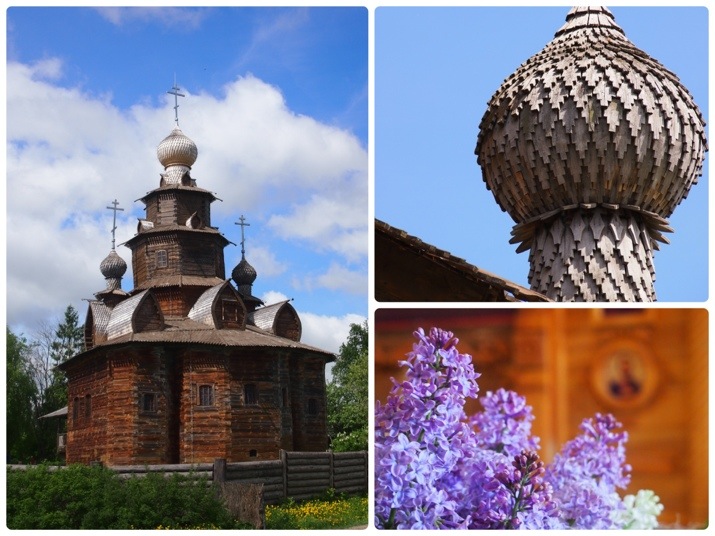 The Church of Transfiguration, wooden tiles on the dome, inside the Church of the Resurrection

Bogolyubovo is mentioned in our guidebook as a side trip from Vladimir and it was recommended to us twice (by Eva who we met at our hostel in Moscow, and again by Vlad and Tonya). We decided to fit it into our spare afternoon before the train to Yekaterinburg, and we’re very glad that we did. The bus let us off near to the very active convent. The interior of the cathedral is beautifully painted and was further enhanced by the nuns’ choir practice. Outside we saw the remains of the original cathedral and another two nuns washing the windows – they definitely wouldn’t have passed a HSE assessment… 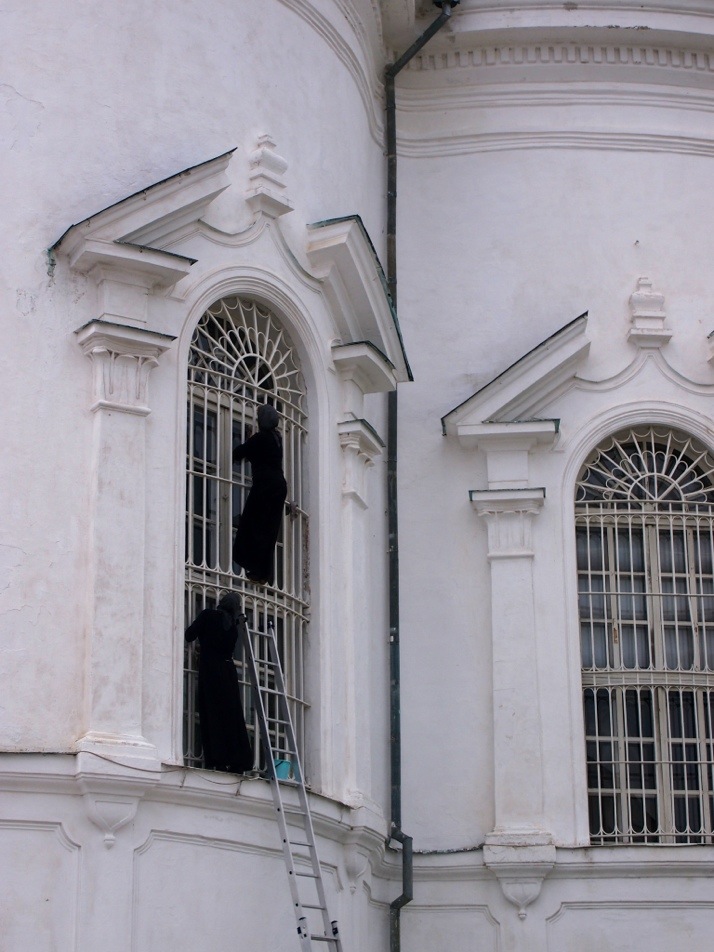 We then took the path past the railway station and over the somewhat flooded fields to the Church of the Intercession on the Nerl. This small single domed church dates from the 12th century and was commissioned by Prince Andrei Bogolyubsky who sited his royal palace here and developed Vladimir into the capital of Rus. 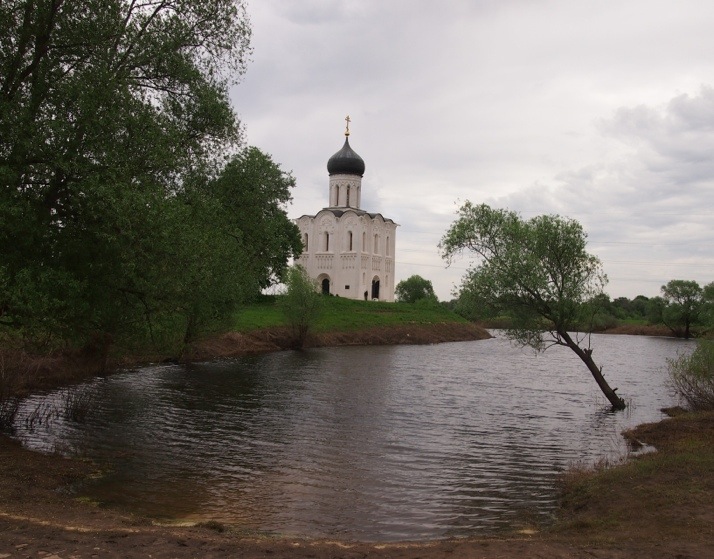 Here’s our Golden Ring round up:

What photo takes you right back to the Golden Ring?

Bogolyubovo wasn’t in our original plans but we both loved the simplicity and location of this church. You really know you’re in the Golden Ring when…

You find yourself lining up another shot of church domes.

What one item should you definitely pack when going to the Golden Ring?

Julie: a scarf to cover your hair in the churches.

6 thoughts on “The Golden Ring”