What photo takes you right back to Georgia? 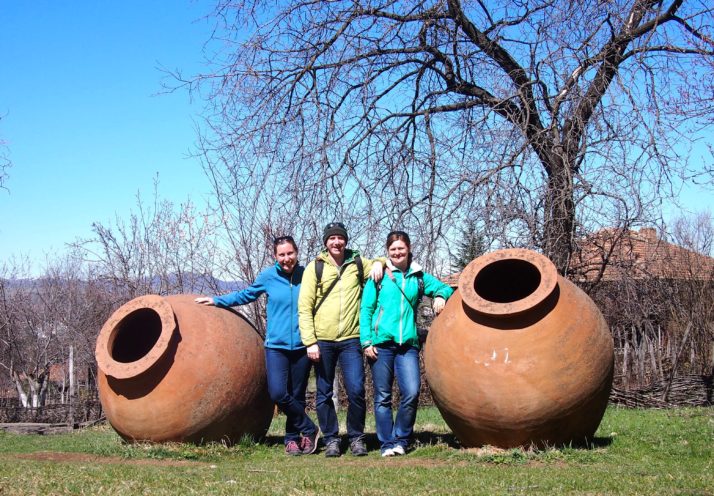 Julie, Jo and I in the Open-Air Ethnographic Museum in Tbilisi

As our long-time friend, fellow adventurous traveller and occasional guest-blogger Jo joined us once more, the photo that takes us all back to Georgia is this one of the 3 of us at the Open-Air Ethnographic Museum in Tbilisi. The museum has examples of the older buildings we’d go on to see as we travelled around (specifically the Svan towers of the Caucasus), two giant clay urns called qvevri for fermenting grapes into the wine for which Georgia is famed, and that deep blue sky reminds us of the (mostly) fantastic weather.

You really know you’re in Georgia when…

…you’re eating aubergine and walnuts. Yes, we’ve mentioned the khachapuri a few times but the food throughout Georgia was excellent. Julie found an immediate fondness for the side dish of spicy walnut paste spread over roasted aubergine and sprinkled with pomegranate seeds (I think that’s the real reason she wants to go back again!)

What one item should you definitely pack when going to Georgia?

A shot glass! Once the Georgians have made wine, they distill the skins into a grappa-like spirit called cha-cha and some of our fondest memories are making toasts with the happiest, most warmly welcoming hosts we’ve had the pleasure of befriending. Georgia really does have it all!