There are a lot of parts of Mongolia that are not easy to get to independently. To reach these, it’s necessary to join an organised tour which is what we did to visit the Gobi Desert area. Our group of 9 was very international: 2 from the UK (that’s us!), a couple from France, a couple from China, an American woman who has been living in Taiwan for 10 years, a Thai Phd student who is studying in the US, and a Korean man. Additionally, of course, our guide was Mongolian, so this made for some interesting conversations about our various countries and different experiences. 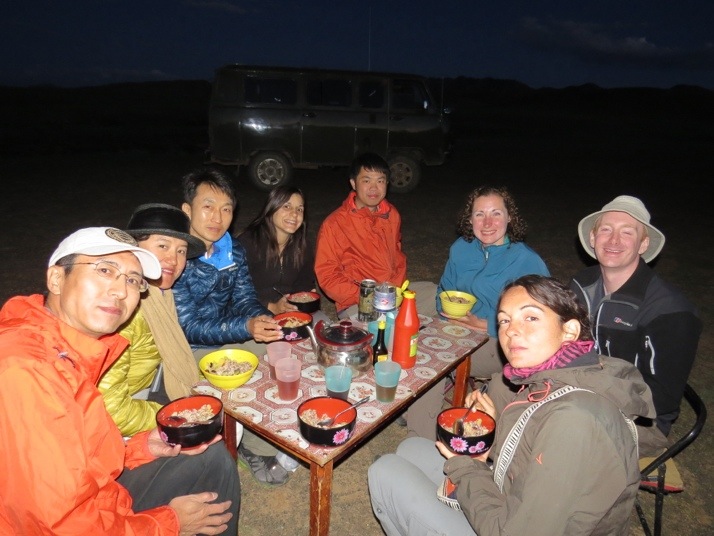 Completing our group were our two drivers and their incredibly robust Russian vans (which Andrew first developed a liking for on Olkhon island). On the first day we made a stop as Ogii tried to track down our host family – rural Mongolians are nomadic and so they’re never exactly where they were the last time you stayed there… As our van pulled up alongside the other, we saw everyone jump back as steam started to pour from the bonnet and a big puddle appeared underneath. Burst radiator? Sounds serious, but Ogii suggested we take a hike up a nearby hill and be back in an hour. Miraculously the drivers had managed to fix it by the time we got back (I suspect gaffer tape must have been involved…) and we were on our way. The vans developed several problems over the course of the trip, but the drivers always managed to have them running in just a short time. 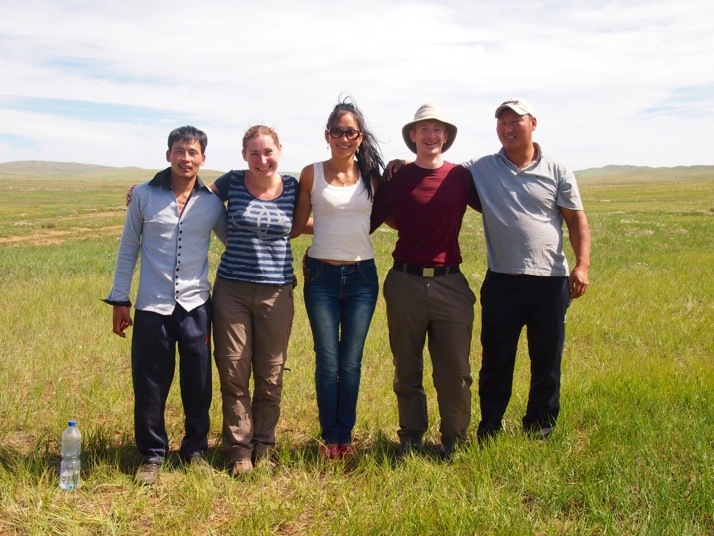 Getting to the Gobi

The 550km drive south from Ulaanbaatar to the Gobi desert took 3 days. The roads outside the main cities in Mongolia are essentially dirt tracks and so the going is pretty slow and, at times, VERY bumpy. The drive gave us a real appreciation for the size and emptiness of the country. We drove for miles without seeing anything other than grassland stretching off into the distance. Then every so often, we would pass a ger, or a herd of horses, sheep and goats, or increasingly as we neared the desert, camels. 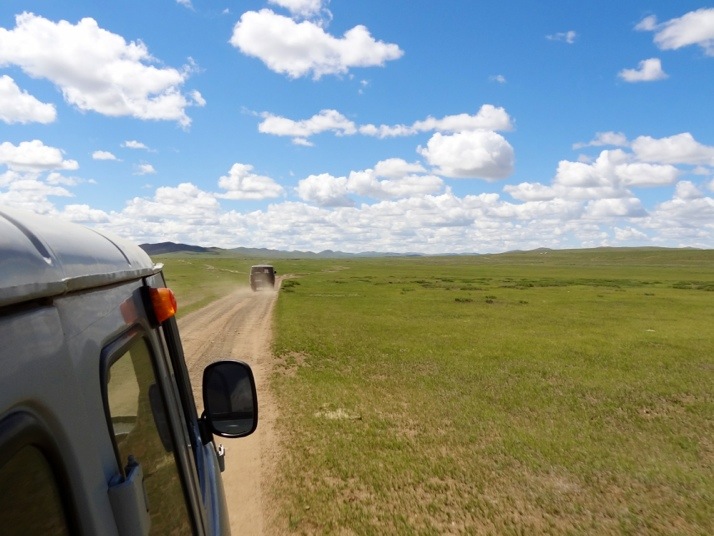 Our two vans on the road

We also made a couple of stops at small National Parks on the way. The first, Baga Gazryn Chuluu, contains the ruins of a monastery destroyed in the purges of the 1930s. It’s situated in a naturally sheltered spot between the rocky hills which is still considered sacred by the local people who have built ovoos (cairns of stones, scarves and sticks with offerings) on the surrounding hilltops. 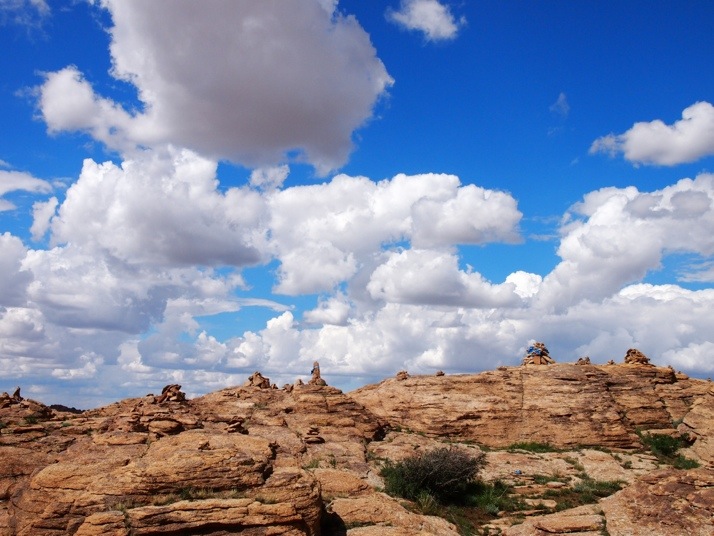 Tsagaan Suvraga is an eerie rock formation in a barren looking moonscape. As we arrived a thunderstorm swept overhead. When we got out of the vans we could still see lightning all around on the horizon and the air was charged with static – naturally several minutes of giving each other electric shocks and taking pictures of ourselves with hair stood on end followed! 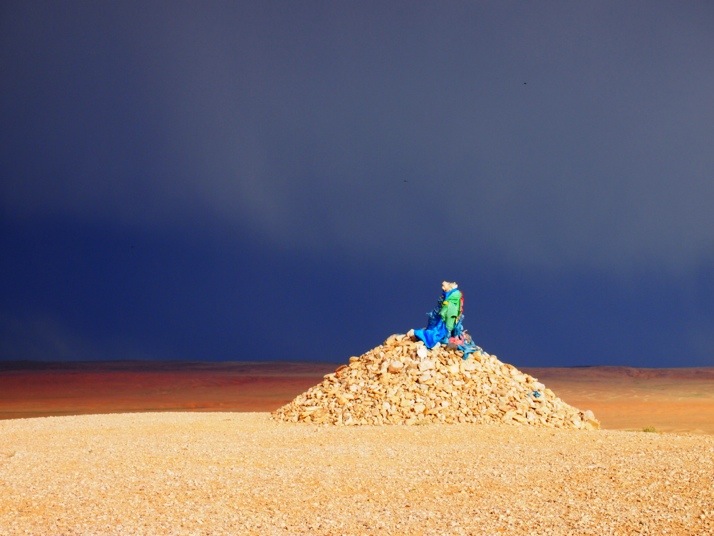 Ovoo on the cliff with stormy skies on the horizon

The brightly coloured limestone pillars are made of very soft, sandy rock and the whole area used to be under the sea so many marine fossils have been found here. 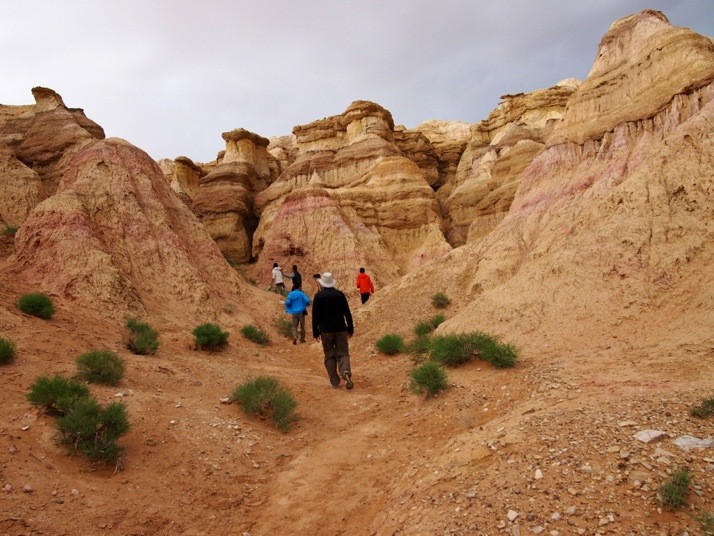 Walking through the rock formations of Tsagaan Suvraga

This narrow canyon was one of the highlights of the trip for us. This national park was originally established to conserve the wildlife of the region and we spent lots of time trying to snap photos of Pikas – the extremely cute hamster-like rodents which live in burrows along the stream side. The gorge itself is so steep sided that ice survives well into the spring and early summer, although there was none left when we visited in the middle of July. 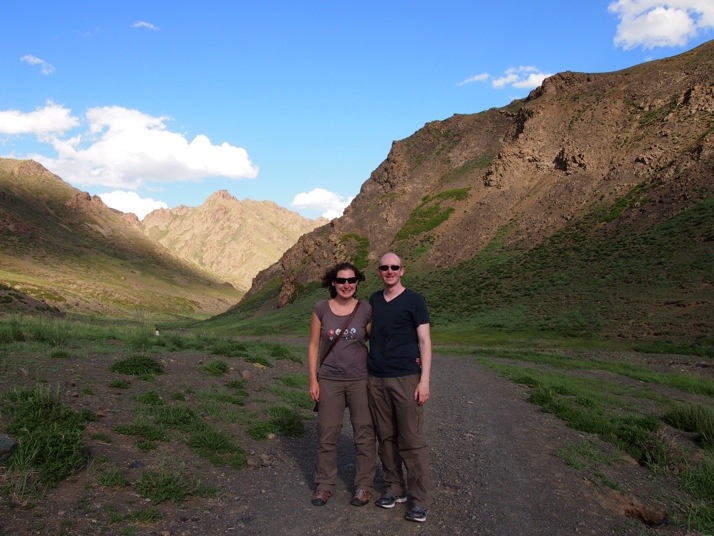 Us at the valley entrance 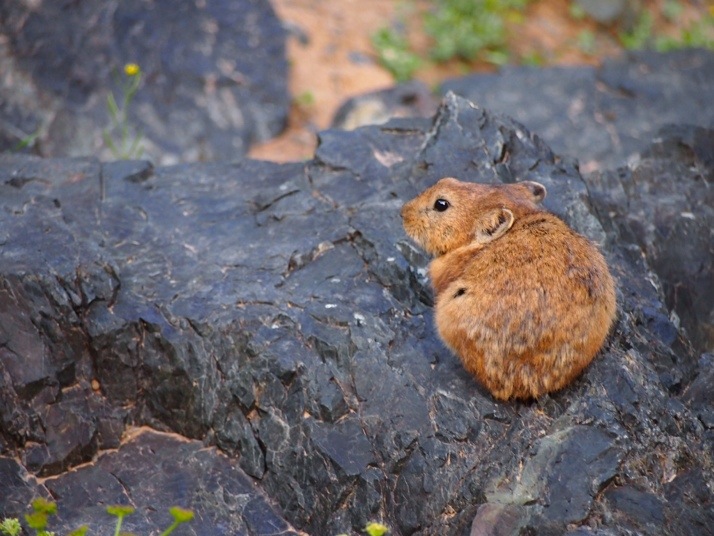 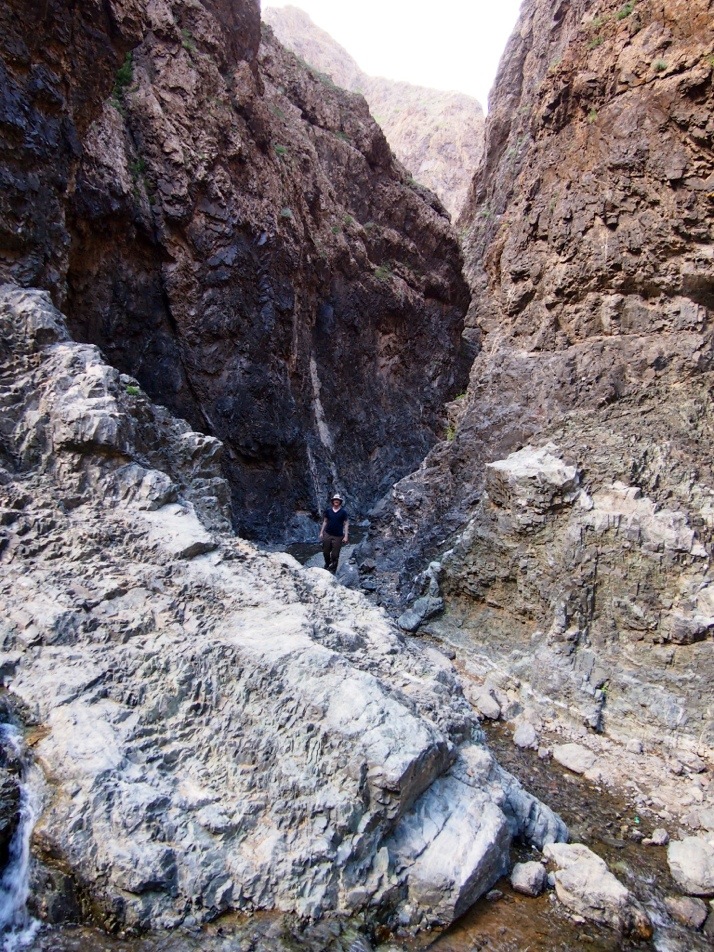 Andrew in the narrow gorge

Most of the Gobi Desert is sparse, dry grassland and doesn’t actually look like desert as you might imagine it. Khongoryn Els is the exception. Here some of the sand dunes reach 300m high. We were able to trek on camels to the dunes, meaning that we’ve now ridden the two-humped Bactrian camel as well as the one-humped Dromedary camels (in Morocco) – so a full set! 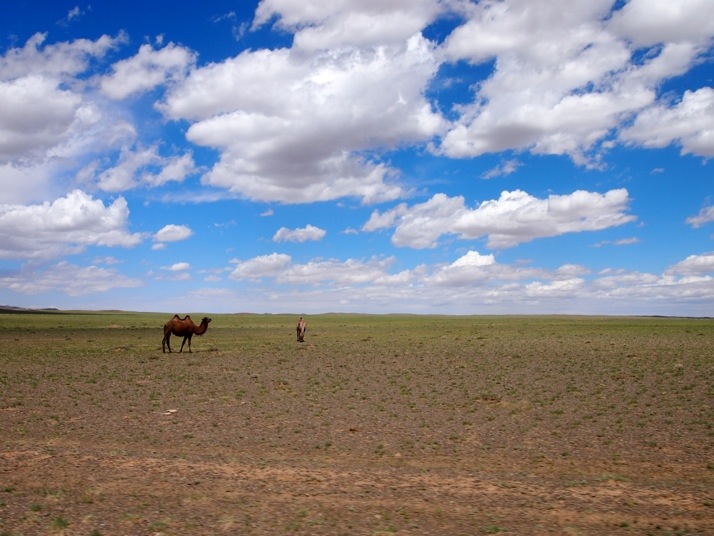 Grassland stretching off to the horizon 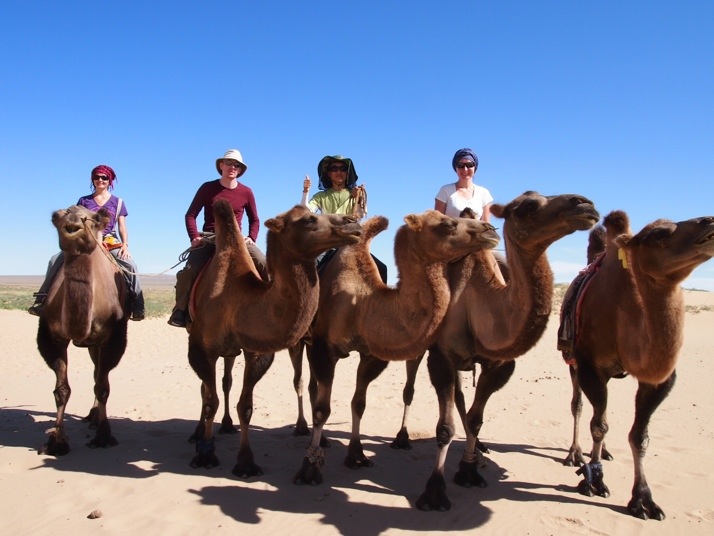 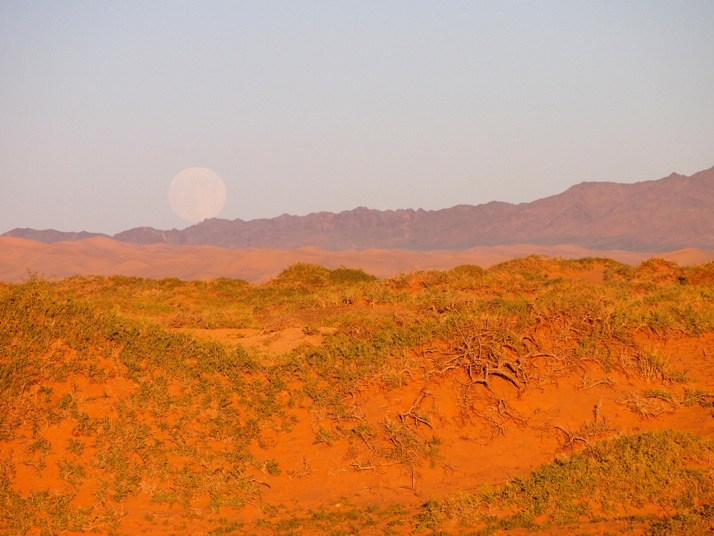 Spectacular moon rise over sand dunes on our first evening

Ogii offered us the chance to buy a goat from the ger camp and have it barbecued in the traditional Mongolian way for dinner on the second night. We were very keen and clubbed together with another group, paying just 10,000MNT (£4.60) each. Part of the experience was the opportunity to see the owner slaughter and butcher the goat. Not everyone wanted to, but we thought that if we were going to eat it, then we should know how it got to the plate. It was much less gory than we expected but the butchery was not as skilled as we’re used to in the UK. 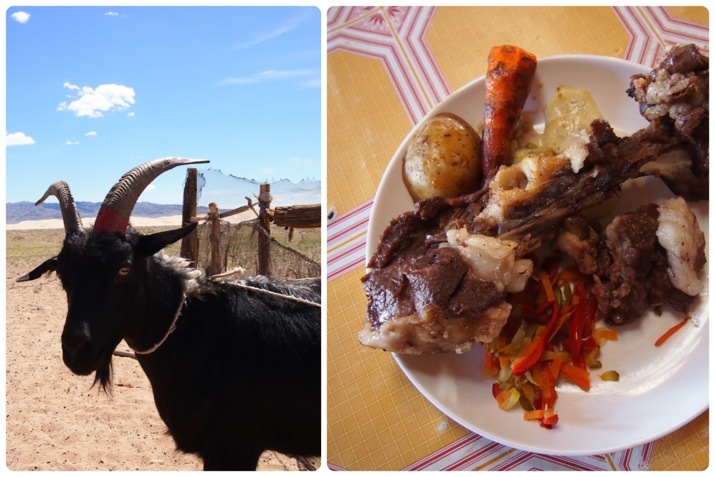 Our goat, before and after…

Bayanzag, or the ‘Flaming Cliffs’ are famous as the site where many of Mongolia’s dinosaur fossils have been found. The day started off rainy but by the time we reached the cliffs the rain had stopped but the wind was still very strong – no safety barriers meant we had to watch our step! This day was also memorable as we were lucky enough to see wild ibex while we were on the road. We had some free time in the afternoon so Ogii taught us to play some traditional Mongolian games with sheep ankle bones. 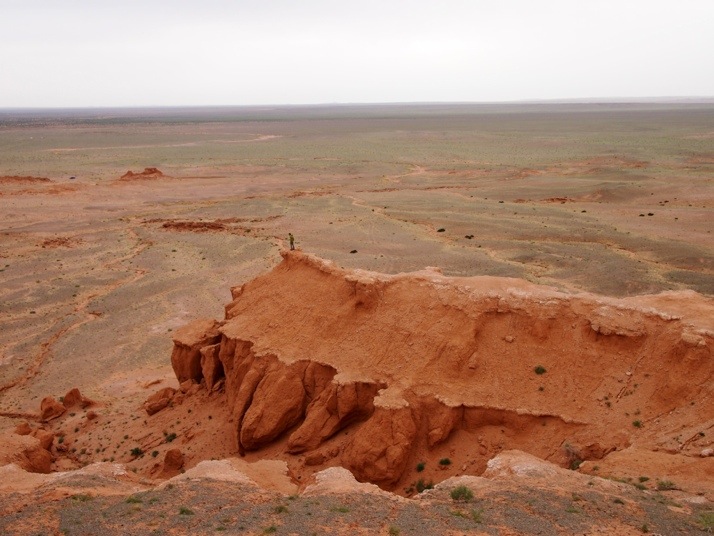 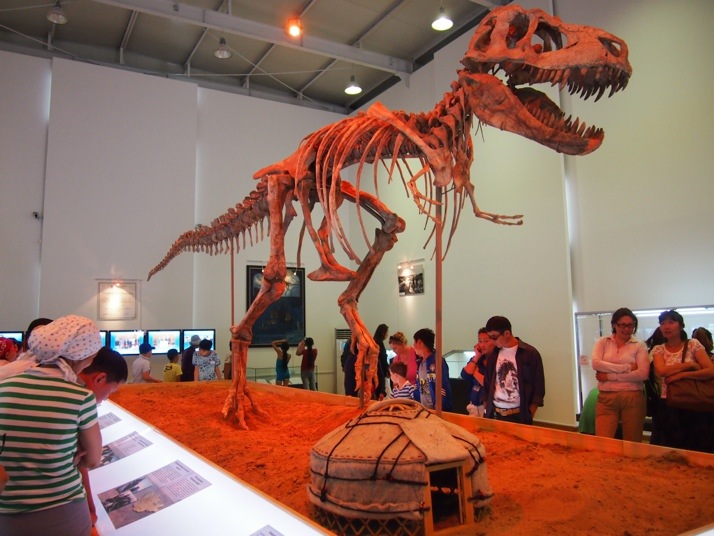 Tarbosaurus fossil on display back in Ulaanbaatar 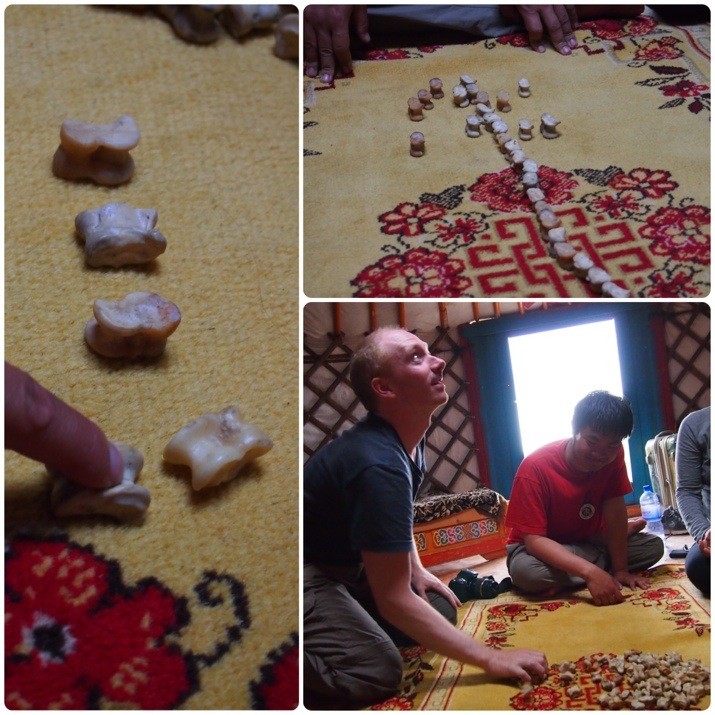 On day 8 we covered a lot of miles to make our way back to Ulaanbaatar. This was hard for us passengers, bouncing up and down in the back of the hot van, but it must have taken a lot of concentration for the drivers as they needed to be on constant alert for bumps and holes in the ‘road’. We managed to stave off the boredom of driving by learning a little Chinese – Isaac and Rebecca are incredibly patient teachers and we’ve got a few phrases under our belt even if our pronunciation might be a bit , erm suspect!

Although the first thing that everyone wanted to do was have a shower when we got back, I think that all were agreed that it was a fantastic trip with great new friends.

2 thoughts on “9 Day Trip to the Gobi Desert, Mongolia”