From Uzbekistan we flew over the Caspian Sea and further along the old Silk Road to Istanbul, the one-time capital but still the largest city in Turkey, and also the 6th most populous city in the world.

Just like Yekaterinberg in Russia, Istanbul sits on the border between Asia and Europe, but we’re not quite back in Europe yet as we elected, at least at first, to stay on the Asian side of the city. 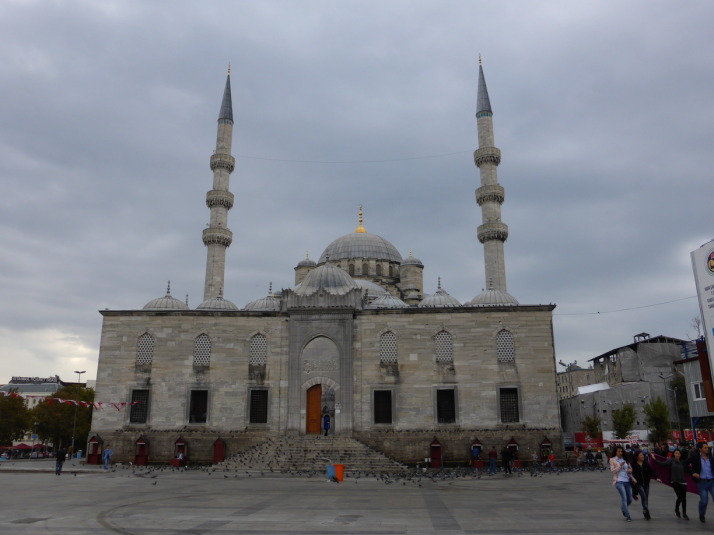 Having spent the last 3 months in 3 different countries (South Korea, China and Uzbekistan), we intend to slow down our travel a little bit, and Julie found the perfect guidebook companion – the delightfully titled “Strolling Through Istanbul“. 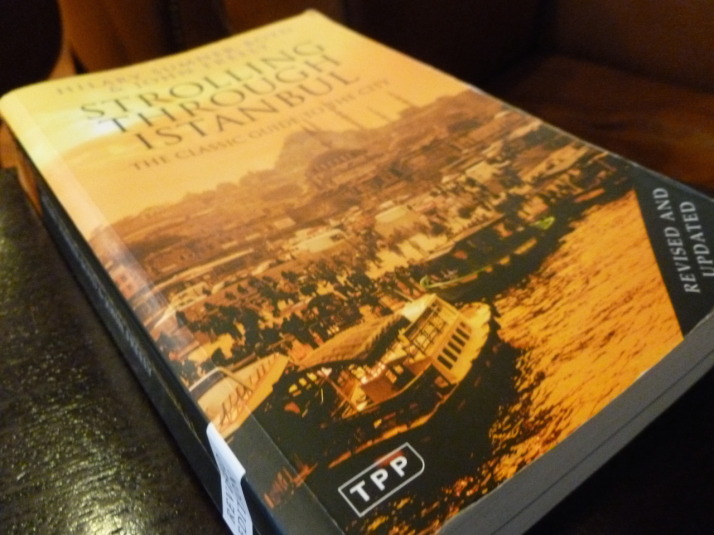 “Strolling through Istanbul: The Classic Guide to the City” by Hilary Sumner-Boyd & John Freely (photo: Islamicana)

This isn’t going to be a book review, nor do we intend to reproduce the strolls verbatim, instead we will highlight our favourite sights and experiences from each of the walks we do.

The first of the strolls we chose from the book was a half-day, uphill amble from Galata Bridge to Haghia Sophia (chapter 2, page 17 for those following along at home). Conveniently, the passenger ferry from our base in Kadikoy on the Asian side dropped us off in Europe at Eminonu, our starting point. 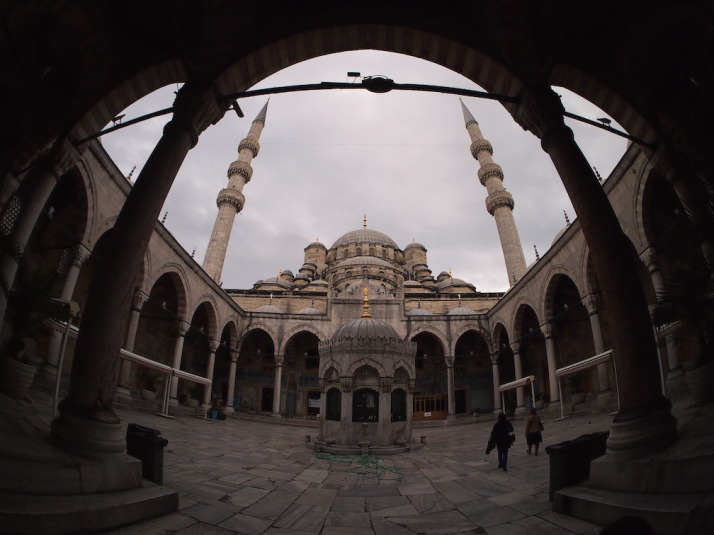 The first stop was also the first mosque we’ve visited in Turkey – Yeni Cami (pronounced “Jami”), literally “New Mosque”. Originally commissioned in 1597 by the then Valide Sultan (Queen Mother of the Sultan), it was to be besieged by her son’s death, and later fire, then lay derelict until it caught the eye of another Valide Sultan and was finally completed in 1663.

On a grey day, the exterior, though intricate upon close inspection, otherwise blended into the greyness, but we found the interior was anything but grey.. 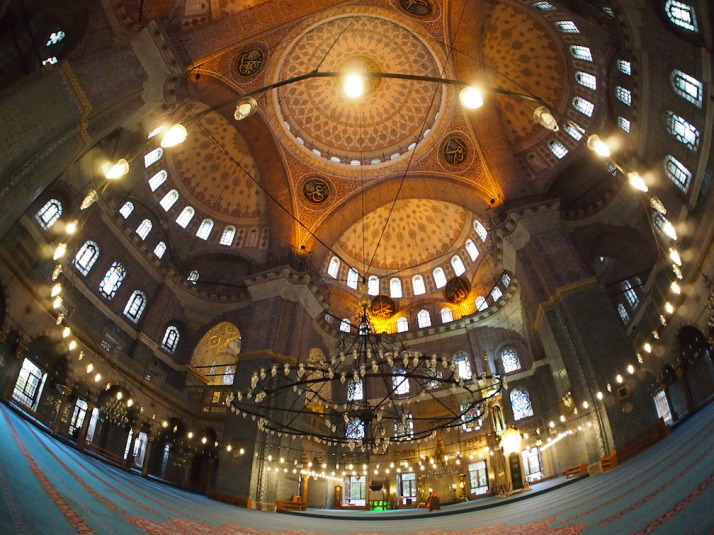 Our guidebook wasn’t very taken with the interior of the mosque (“the interior is somewhat disappointing”), however we really liked it – the bright blue tiles of differing patterns that decorate the four main supporting pillars were vibrant, and also completely cover the main focal point of the mosque – the south-east facing wall with the mihrab which indicates the direction of Mecca. 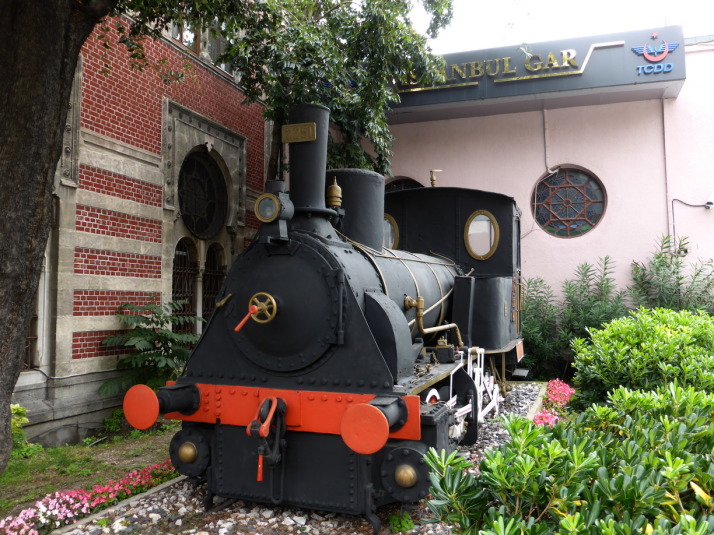 An old engine on display outside Sirkeci Station – the terminus of the Orient Express service. I doubt this engine was used as it’s a bit small..

Sirkeci train station gets a passing mention on the route, but given our love of overnight train journeys we were pleased to learn that this station was the terminus for the Orient Express!

Sadly, the Orient Express stopped running on the 13th of December 2009 so we’ll have to find another way back to Blighty.. 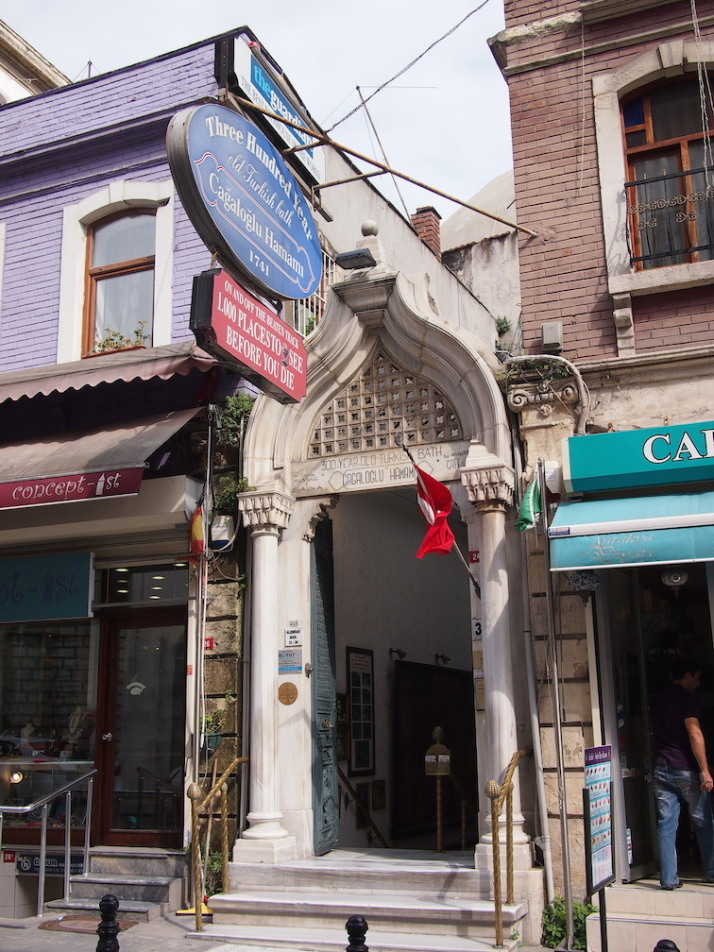 Further up the hill we arrived at another institution of Turkish life – the hamam or public bath. Our guidebook helpfully notes two things: the Turkish bath is a direct descendent of the Roman bath; and this particular hamam is probably the most beautiful and famous in Istanbul. Built in 1741 by Sultan Mahmut I, the money it took was used for the upkeep of a library the Sultan built in Haghia Sophia.

We ventured as far as the camekân, or reception room before returning to the stroll, but not until we’d made a note of some of the famous people that have partaken of the Turkish waters here: John Travolta, Cameron Diaz, Jenson Button, Brian May, and Kate Moss, to name a few! 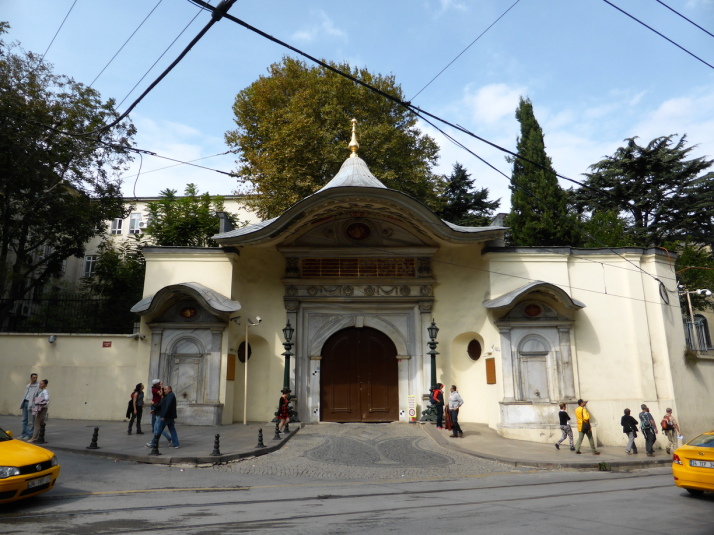 The Sublime Porte, very nice but I wouldn’t go as far as to say ‘sublime’

Once the gate that led to the palace and offices of the Grand Vezir where most of the business of the Ottoman Empire was transacted, it now leads to the Vilayet or the government of the Province of Istanbul. Interestingly, our guidebook says that the gate became synonymous with the Ottoman government itself and ambassadors were accredited to the Sublime Porte rather than to Turkey, just as to this day ambassadors to England are accredited to the Court of St. James. 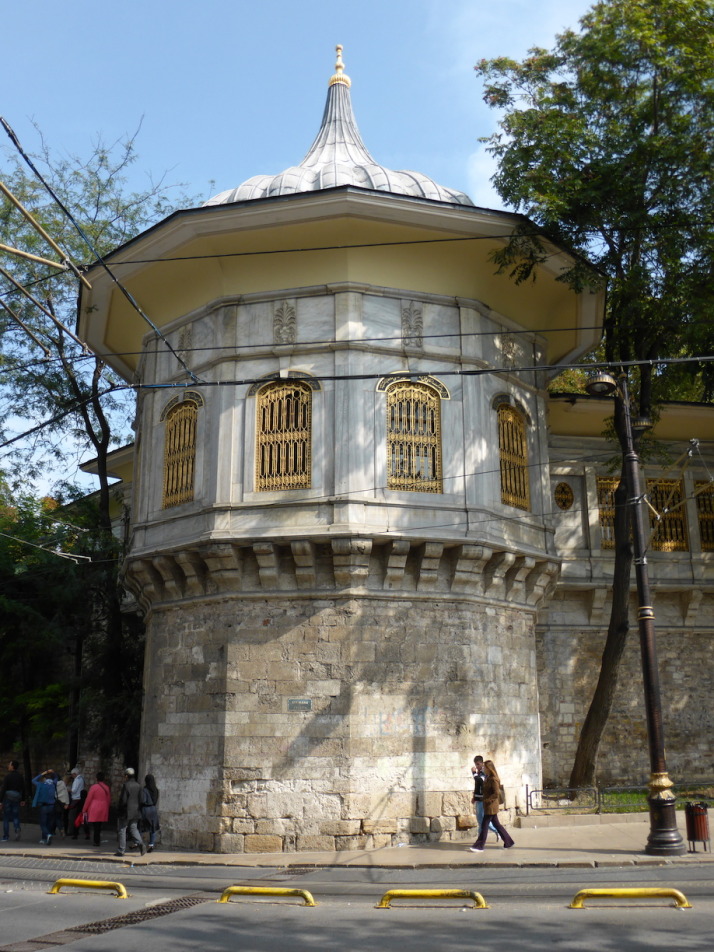 The Alay Köşkü, great for watching parades, keeping an eye on the state, or picking off your subjects..

Directly opposite the Sublime Porte is a large gazebo called the Alay Köşkü which translates as Review or Parade Pavilion, and is a tower in the walls of the Topkapi Palace where the Sultan could watch the affairs of the Sublime Porte gate opposite.

Our guidebook retells of one Sultan Crazy Ibrahim who used this vantage point to pick off pedestrians with his crossbow! 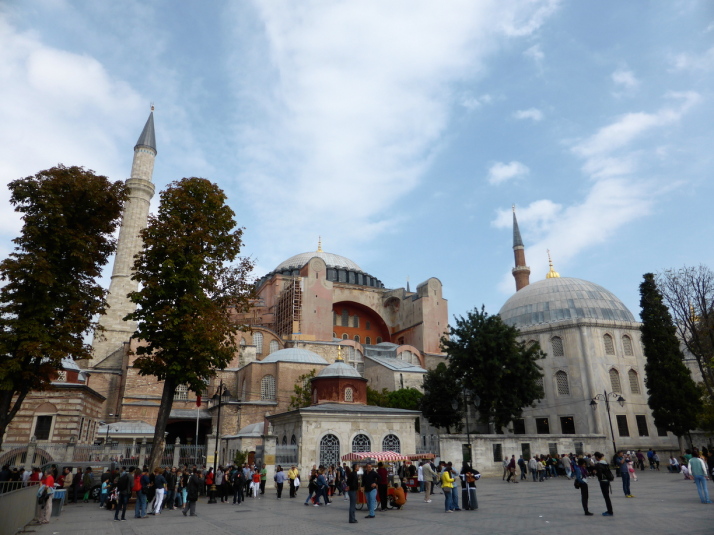 The walk ends at the magnificent Haghia Sophia, which after seeing the queues outside we decided we’d leave for another day. Though there was time for our first proper Turkish coffee on the way home.. 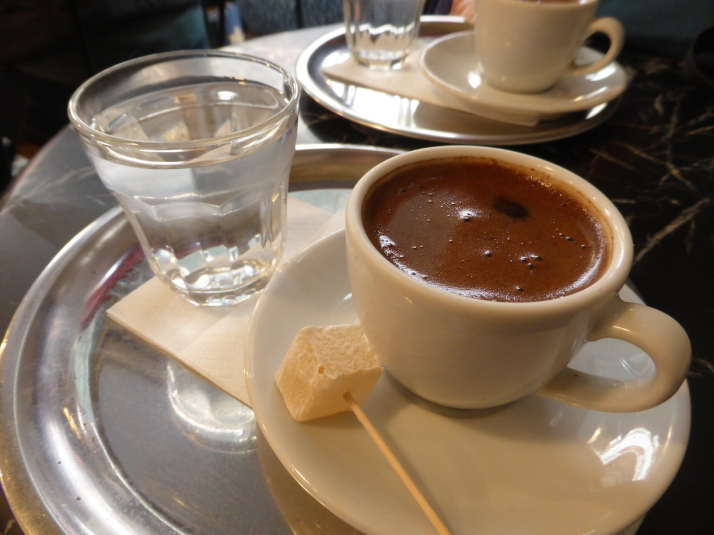 Our first proper Turkish coffee in Istanbul. How do you know by looking at it? It’s the lokum or Turkish delight on the side of course!