Battambang was a bit of an itinerary afterthought for us. We wanted to break our journey between Kampot and Siem Reap without staying in Phnom Penh again. We’d read that there was a scenic boat ride from Battambang to Siem Reap but the Lonely Planet didn’t make much more of the town so we got a very pleasant surprise! 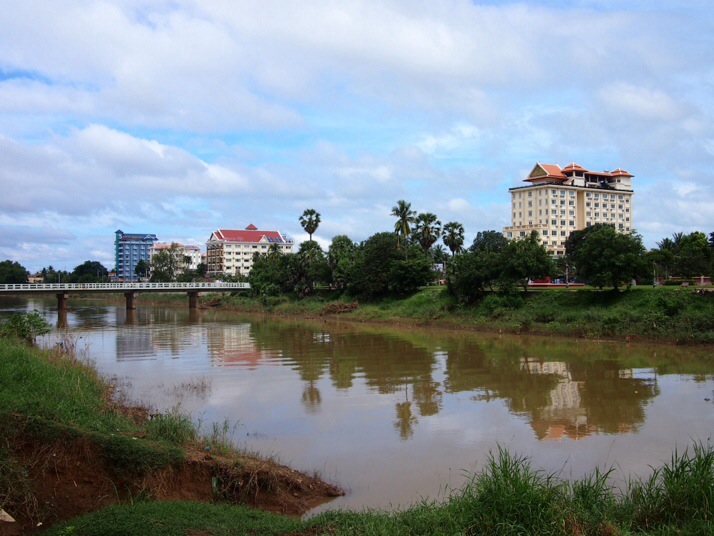 On arrival at the bus company’s office we knew that the hotel we’d booked was only a few minutes walk away so we had to make our way through the usual Cambodian scrum of tuk-tuk drivers without accepting a lift. One of the drivers spoke really good English and started trying to lead us away, we thought he was taking us to his tuk-tuk but he was just walking us to the corner from where we could see our hotel. We told him we hadn’t decided what to do the following day but he gave us his name, David, and phone number and said to ring if we needed a driver.

The next morning, after getting a bit of a hard sell from the hotel reception about taking a tour with one of their recommended drivers we decided to call friendly David instead. We told him a couple of things that we were interested in seeing and he basically worked those into a day with stops elsewhere along the way, and lots of corny jokes…

David: How do you put an elephant in the fridge?
J&A: Hmm, don’t know.
David: It’s a piece of cake, you just open the door and put him in.

A little while later,

David: How do you put a giraffe in the fridge?
J&A: Easy, just open the door and put him in.
David: No, no, no, first you have to take the elephant out and then you can put him in.

And so it went on, which is to say that he was lots of fun and very good company.

The day started with a quick tour of sights in the city, including examples of French colonial architecture, a monument made of guns which were collected during an amnesty period and the statue of the mythical figure of Dom Boeng – the legend of his lost magical stick gave the city its name. 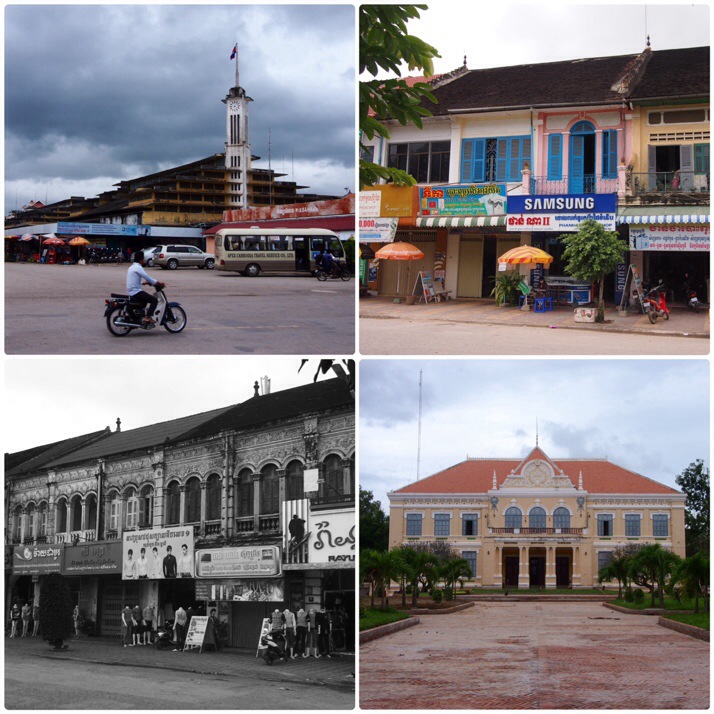 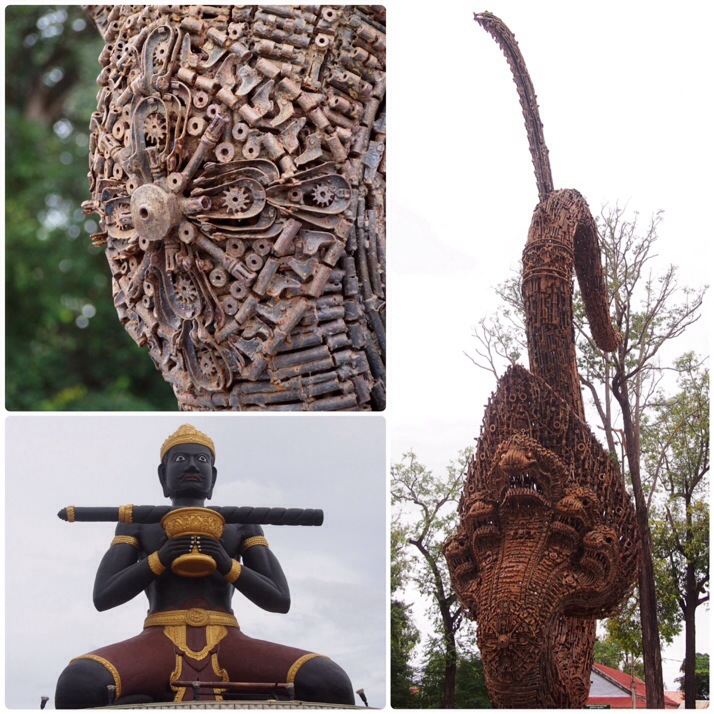 Next was a trip along the very wobbly rails on the bamboo train. When we got off we found David playing chess with another driver. He’d just lost a game and asked if we wanted to watch a rematch. Neither of us are really chess players but we both have an understanding of the basic rules. Apparently though Asian rules are different to European as there were a few times when we were left wondering how a certain move was made (or not made). David won the match and we set off again in good spirits. 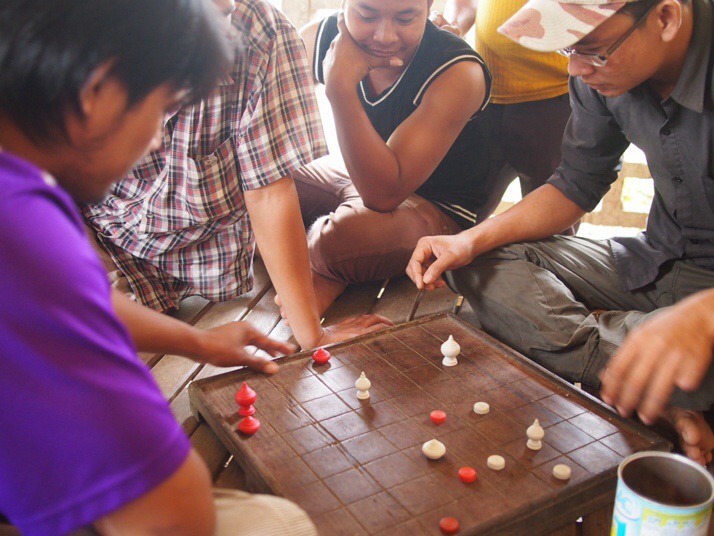 Various short stops followed – an old wooden house, a ‘dancing’ bridge, a fishing village, a mushroom farm, and trees full of roosting fruit bats – before we arrived at Prasat Phnom Banon, Cambodia’s only winery, for a tasting. I can’t say that the wine was good, but it was OK, I guess they’re still learning… 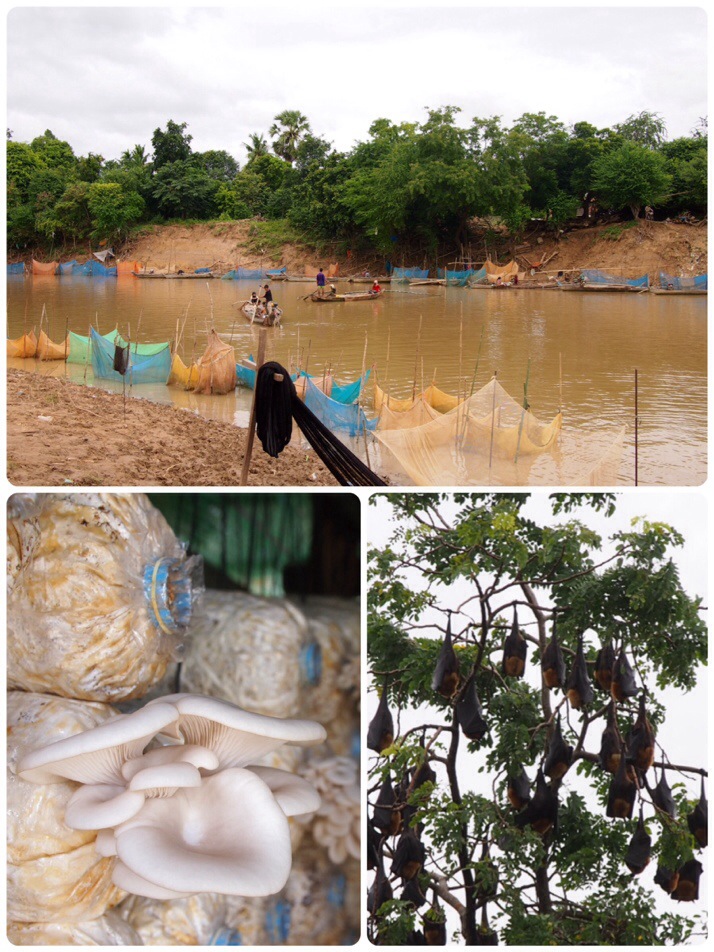 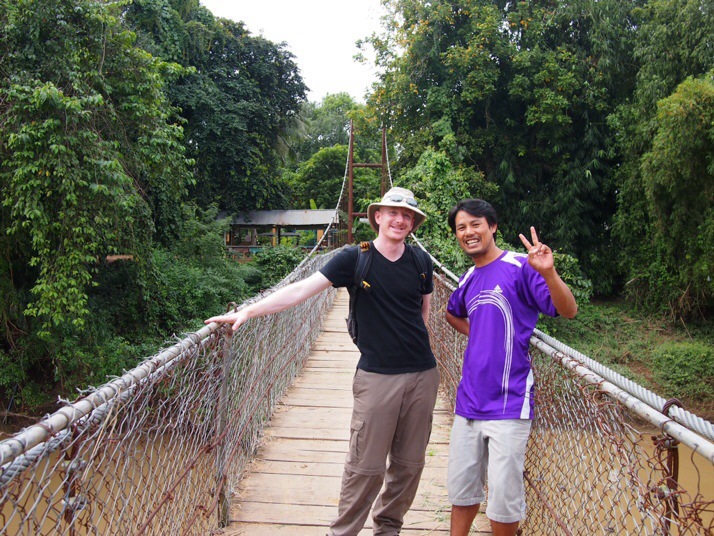 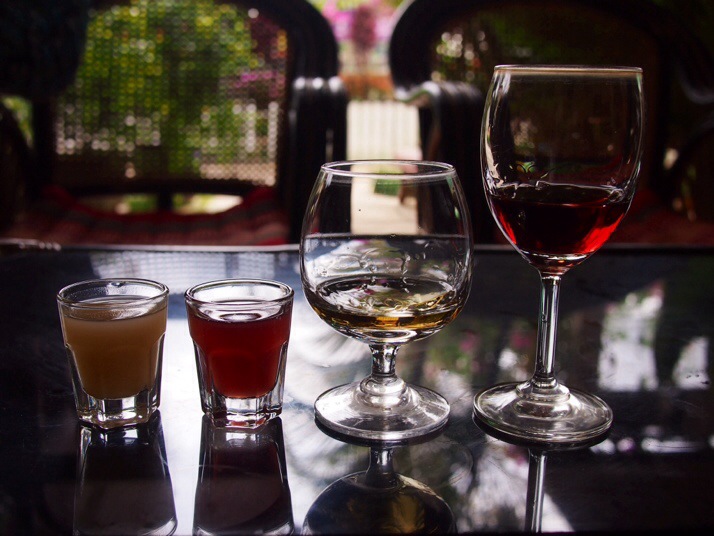 After a quick lunch and a random meeting with a French couple we’d last bumped into in Mongolia (hello Sebastian and Charlotte!) we headed up the 368 steps to Wat Banan. The temple ruins consist of 5 towers situated on the top of the hill. They were built in the 11th century and although in a somewhat tumbledown condition they are in a lovely location and you can still see some beautiful carvings. 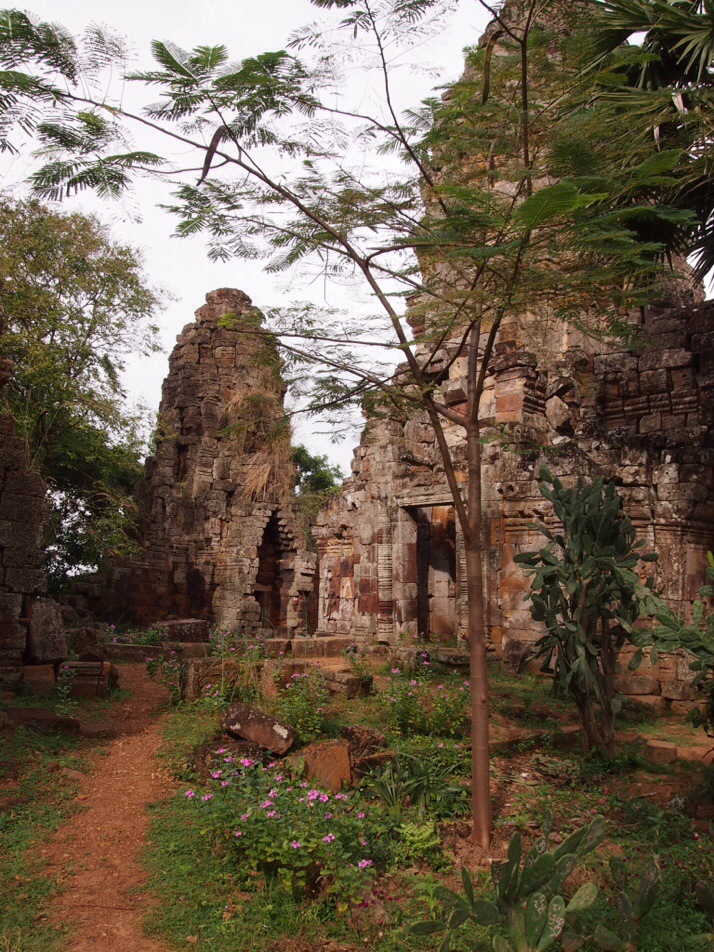 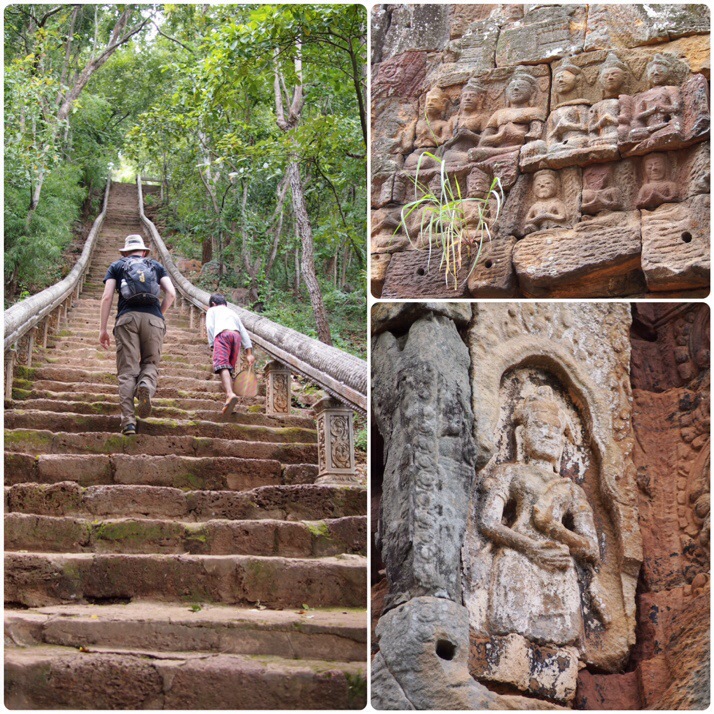 Andrew counting the steps with a local helper, carvings above the doorways and on the walls

Next stop, after a ride down a bumpy track, was another, quite different temple. Phnom Sampeau is a modern, working temple and is nothing unusual if you’ve visited temples in other parts of Cambodia. The highlight of the visit there is its position on top of a hill and the stunning views over the surrounding countryside from the top. Nearby is the site of a Killing Cave, used by the Khmer Rouge to dispose of anyone believed to be a threat to the regime, in a similar way to the Killing Field that we visited in Phnom Penh. 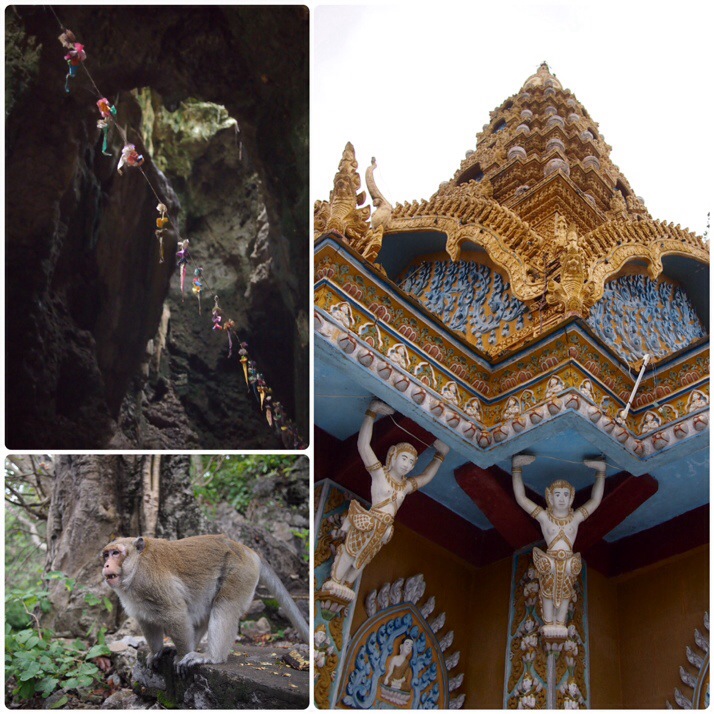 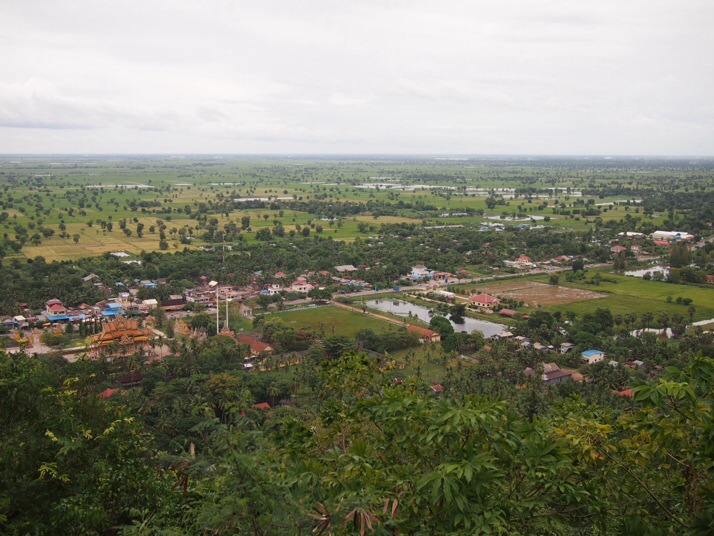 The hill which Phnom Sampeau is built on also contains a cave which is home to thousands of bats. Every evening at sunset the bats stream out of the cave to go to their hunting grounds and eat mosquitos. It was one of those sights, like the frozen sea at Jurmala in Latvia, or the story behind the Vinh Moc tunnels in central Vietnam, that we knew nothing about before we arrived but just blew our minds. It was absolutely breathtaking, and even after we’d watched the bats stream out for about 10 minutes and we’d set off back to the city we could still see the wave of them winding over the fields. Awe inspiring. 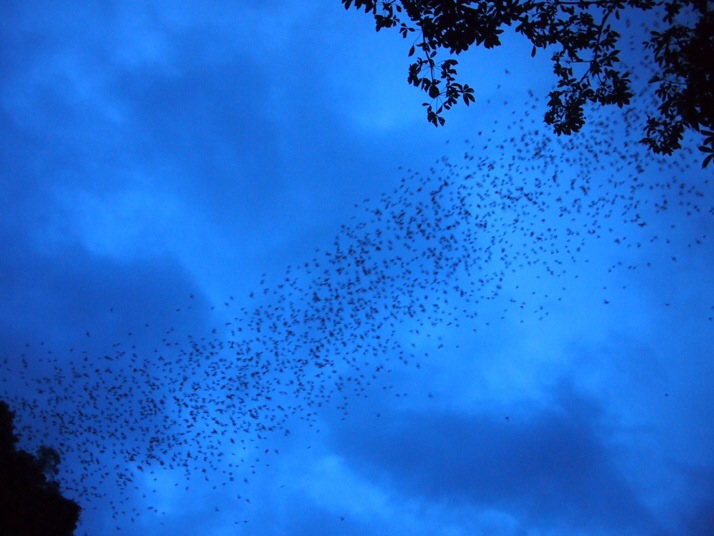 The light was too low, and the bats too fast, to get a good photo, but imagine this density of bats streaming out for 30-40 minutes

The next day we had a less packed schedule. We wandered through town and along the riverside, taking a closer look at the architecture before visiting the small (and pretty uninspiring) Battambang Museum and spending a leisurely afternoon in Kinyei cafe. That evening we went to the circus. This is not something we’d usually be interested in, but after discovering that it was the #1 rated attraction for Battambang on Tripadvisor our interest was piqued.

Phare Ponleu Selpak is an NGO working with vulnerable and disadvantaged teenagers by providing social support, education and arts programs. They run visual arts courses which result in some remarkable paintings, some of which we had a chance to see before the show and we may well have bought one if we wouldn’t have had to carry it. The other major courses that they run are in performing arts, specifically circus skills, and they have frequent shows to give the students an opportunity to practice in front of an audience at the same time as raising money through ticket sales.

The evening that we visited was the turn of the second year students. The show included contortions, acrobatics and clowning, and it was fast paced and lots of fun. Their inexperience was sometimes clear and occasionally they had to have a second attempt before reaching the pose they were trying for. But when they managed it their grins were huge, it was obvious that they were having a great time and their enthusiasm was infectious. We came away with huge grins on our faces too. 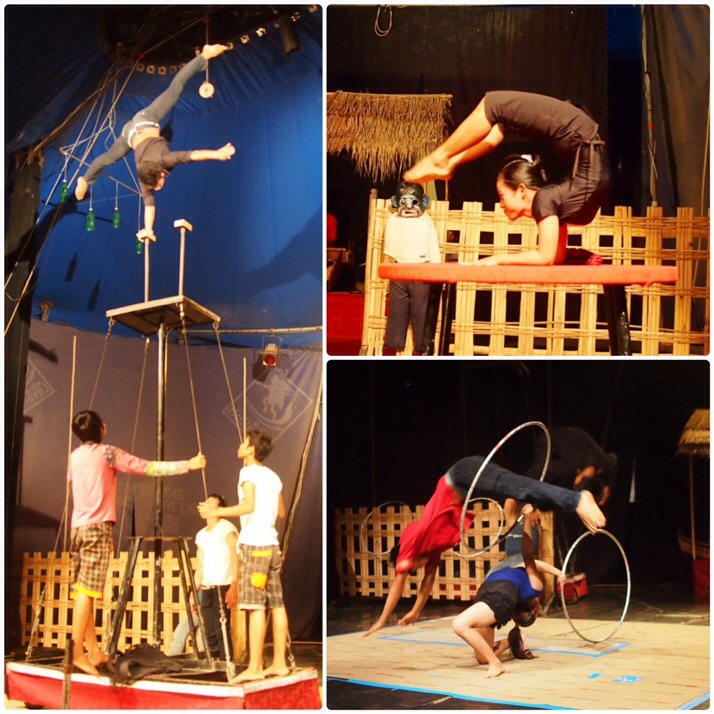 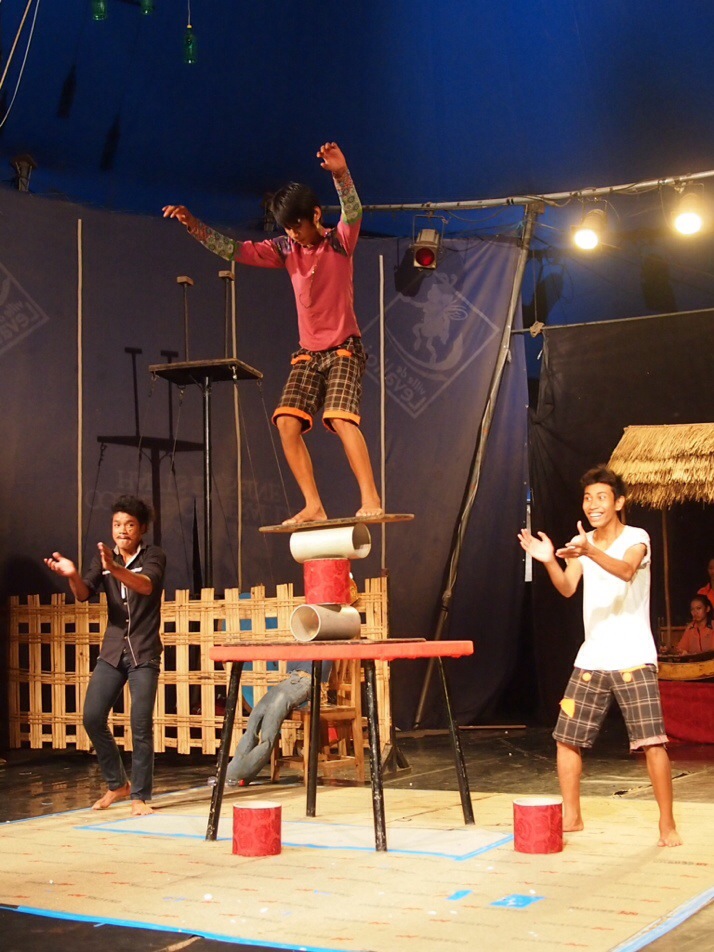 After an interesting and enjoyable two days it was time for the ‘scenic boat ride’. The boat service from Battambang to Siem Reap is more expensive than the bus, takes longer, is not very comfortable (the seats are wooden) and is not much fun in the rain as the boat leaks and the luggage gets wet as we found out to our cost during the hour or so that it rained, fortunately most of our stuff was in plastic bags. Nevertheless, if you have the time, the scenery and local life are different to anything you would see from the bus. I don’t want to put anyone off but there are definitely cons to be weighed against the pros before deciding on this journey. For us it was similar to some of the things we saw in the Mekong delta and the cruise from Cat Ba island – life lived from boats and along the riverbank, floating houses and shops. 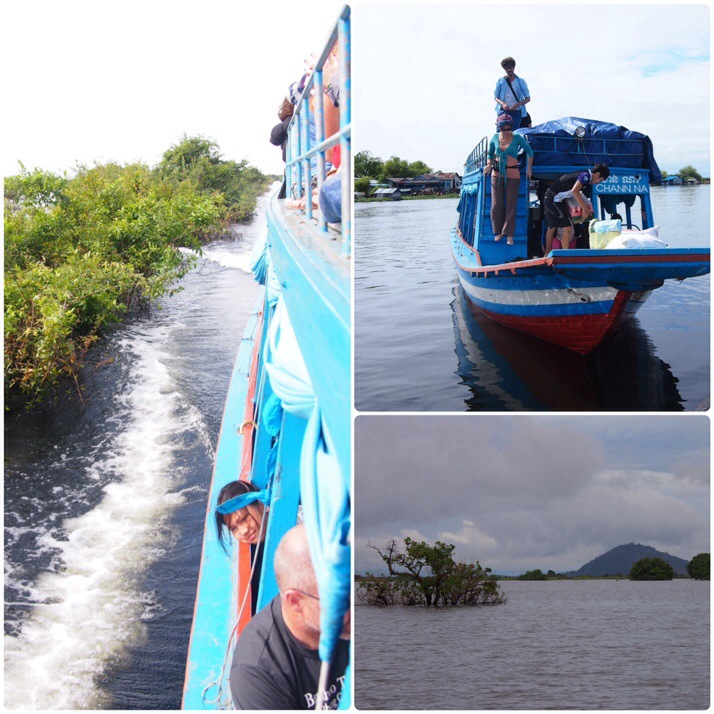 Part of the journey is through narrow channels between the mangrove, the boat docked at a floating village shop at roughly the halfway point, the final part of the journey was through the bird sanctuary and biosphere of Prek Toal at the western end of the huge Tonle Sap lake 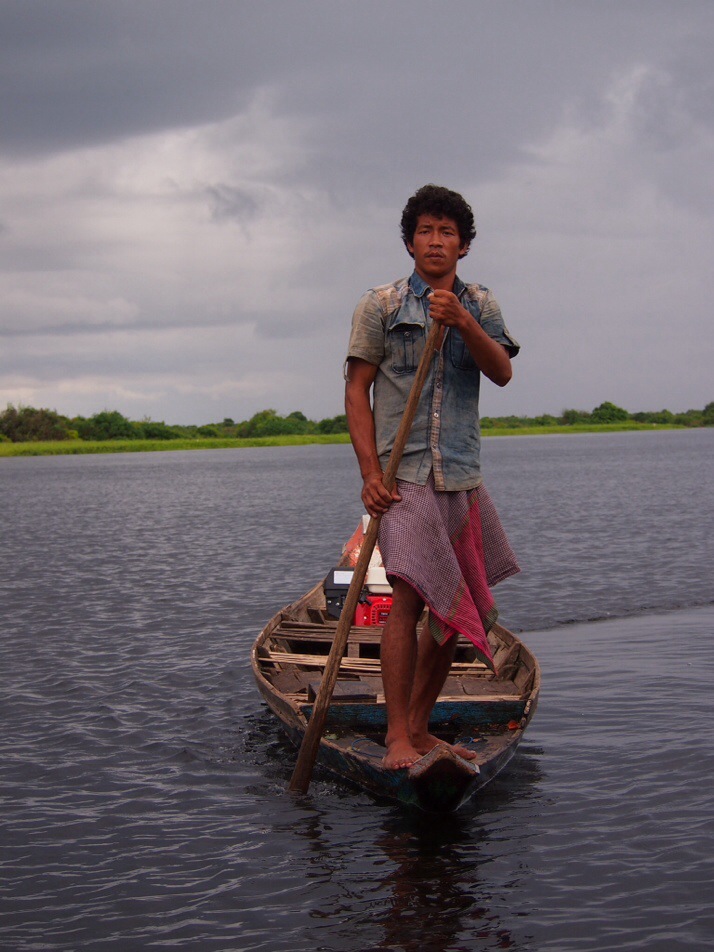 6 thoughts on “Battambang and around, Cambodia”