Baracoa, perched on Cuba’s eastern edge is the island’s oldest city founded in 1511 and surely also one of its smallest. It is hemmed in by mountains and rainforest, having a microclimate all its own and was isolated from the outside world until the spectacular La Farola road was opened in 1965 connecting the town with Guantanamo City and the south coast. 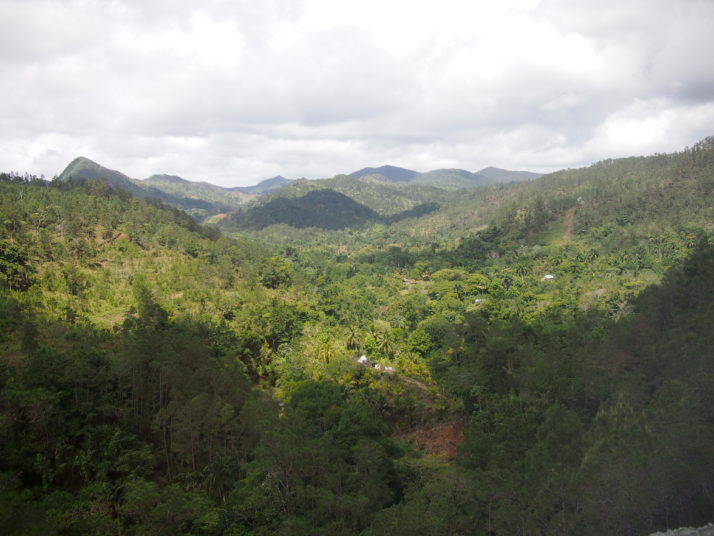 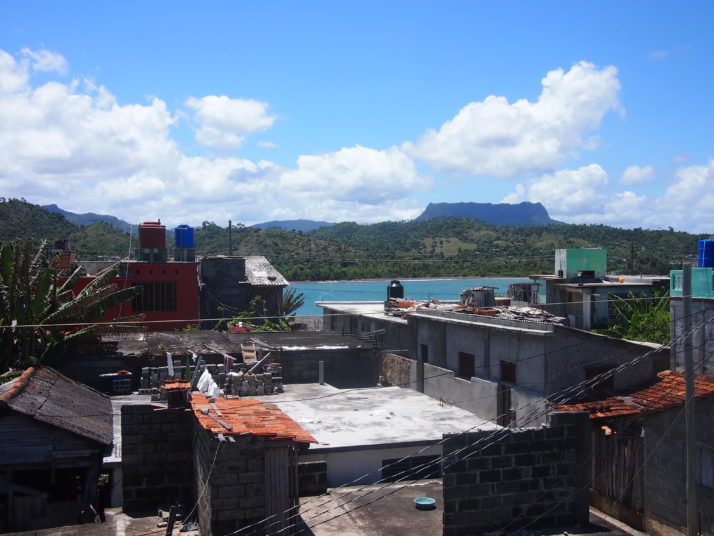 The table top mountain called El Yunque, the Anvil, is the symbol of Baracoa and is visible from many places in town including the roof terrace of our guesthouse.

Baracoa’s tiny cathedral (about the size of your average parish church) is at the centre of the town and is home to the Cruz de la Parra, the only surviving wooden cross of 29 planted in Cuba by Columbus on his first voyage and ‘discovery’ of the island in 1492. 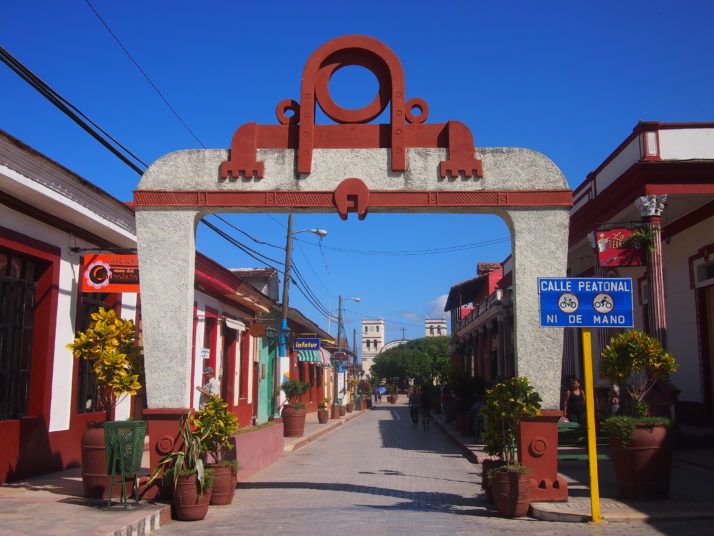 Looking along Baracoa’s walking street towards the cathedral 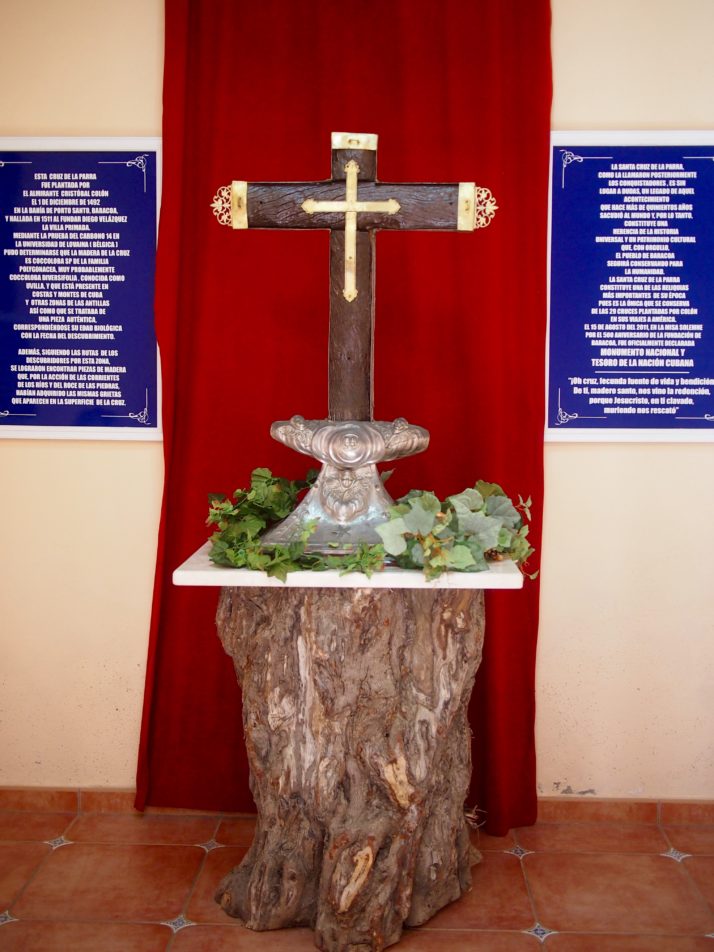 The town itself doesn’t have much in the way of sights but we enjoyed strolling along the slightly dilapidated seafront to the even more dilapidated baseball stadium at the end of the beach. We also spent a fascinating hour nursing a beer on a balcony overlooking a street that was being resurfaced. It was amazing to see the hard work done by hand that we’re used to seeing machines do. 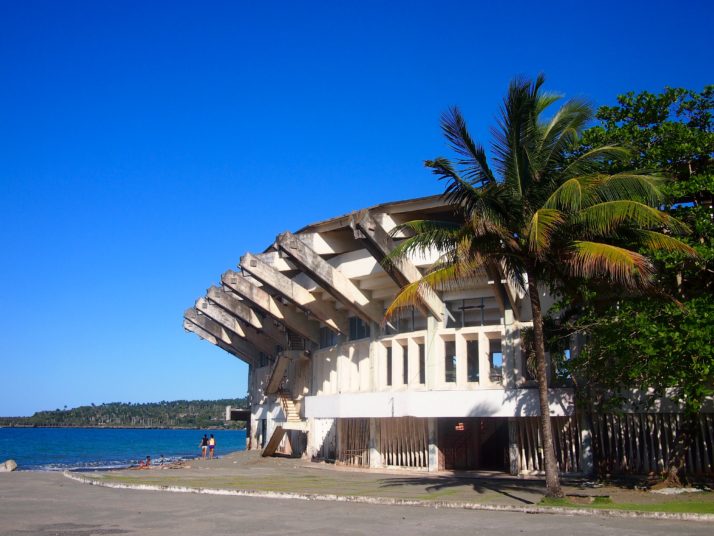 One morning we walked up the hill through residential streets, puzzling over why all the cockerels seemed to have no feathers on their legs or bellies until we realised they were for cockfighting. 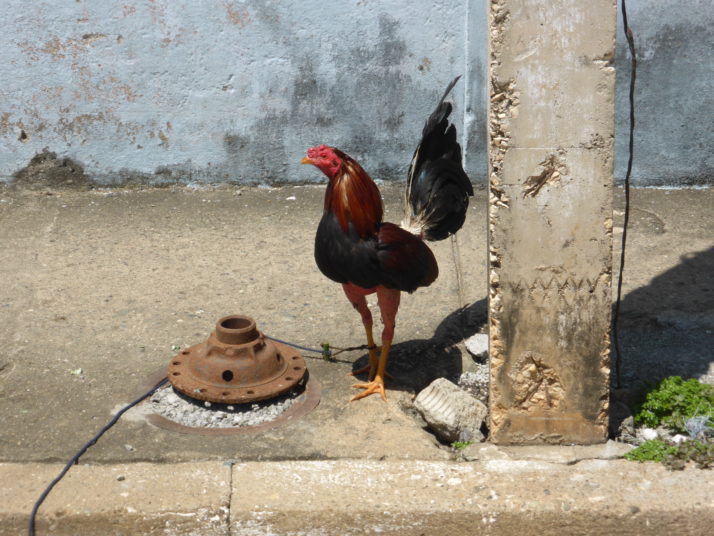 Dripping with sweat after the short but steep climb we arrived at the Archaeology Museum which has been imaginatively set up in a series of caves where burial chambers of the Taíno peoples had been found. The Taíno arrived in Cuba from Venezuela around 1050AD and were living there peacefully in farming communities when the Spanish arrived in the 15th century. Many died from European diseases and more when they were pressed into harsh slavery by the settlers. The entrance to Baracoa’s Museum of Archaeology

The displays were not so exciting but the cave setting was a quirky idea, the attendant was friendly and gave us a good explanation in English and the view over the town was superb (it’s from here that we spotted the cemetery that we visited later in our stay). Museum of Archaeology (clockwise from top left): display cases inside the cave; Taíno artefacts; a replica of the Ídolo de Tabaco, one of the most important Taíno finds in the Caribbean; burial chamber

We had initially planned a hiking excursion to El Yunque, but changed our minds after hearing the descriptions of the Humboldt National Park, 40km north-west of Baracoa, and went there instead. The road to the north is not in very good condition and so our group of 15 plus our guide Benny were loaded into three jeeps for the dusty hour and a half that it took to bump our way there. The Humboldt National Park is famous for its biodiversity with lots of endemic species. 70% of the plants as well as lots of amphibians, reptiles and birds are found nowhere else, and the park was declared a UNESCO World Heritage Site in 2001.  We’d hoped that we would see quite a bit of wildlife and certainly at the beginning of the hike we did with Benny stopping to point out Tocororos, woodpeckers and parrots as well as different kinds of plants. But as the path narrowed the group became too spread out to see much and the pace felt too fast for us to fully appreciate the forest. Flora and fauna in Humboldt National Park (clockwise from top left): Cuba’s national bird, the Tocororo; termites; the colourful Rat Pineapple is related to the normal pineapple but doesn’t produce an edible fruit; this huge millipede was about 25cm long and thicker than my thumb

Swimming opportunities seem to be an obligatory feature of excursions in Cuba – it felt like every time someone was trying to sell us an excursion it ended with ‘a chance to swim in the river / pool / sea’ (frankly this usually feels like a waste of excursion time to me but clearly I’m in the minority here).  Anyway this trip was no different; just before lunch we stopped at the top of a waterfall where anyone who wanted to could jump into the pool below and swim downriver to the curve where we would break for lunch. About ten of the group did, the rest of us followed the path along the river to meet them below. 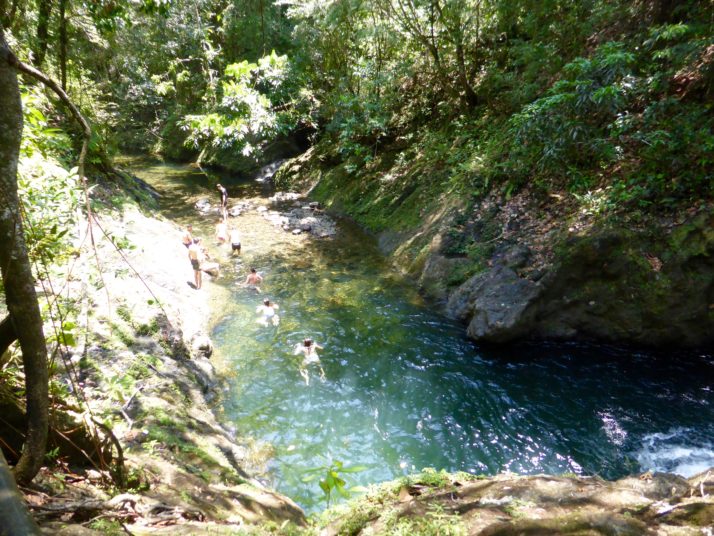 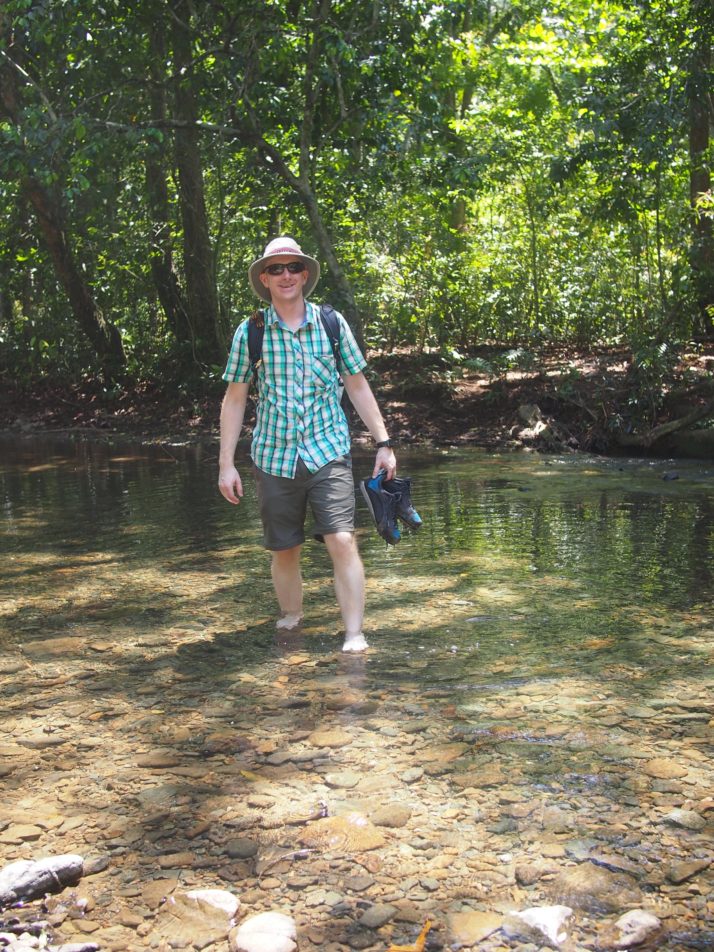 After lunch we had to cross the river 8 times to get back to where we’d left the jeeps. I was glad that I’d carried my flip-flops to cross the stony riverbed, Andrew had to do it barefoot.

On the way back to Baracoa we stopped at Playa Maguana.  It was our first Cuban beach experience and the white sand and turquoise ocean were just as breathtaking in real life as they are in the travel brochure photos.  The sea gets deep quite quickly, and the wave swells were high enough to make bobbing up and down in the water fun.  It also helped that we could take turns with the others in the group watching bags and go into the water together. 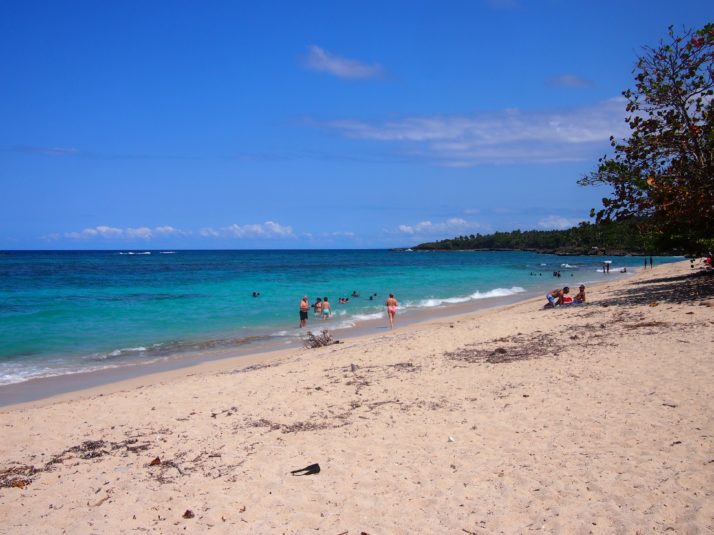 Playa Maguana, there’s even a guy who’ll bring you a drink direct to your beach towel

The Lonely Planet touts Baracoa as the best place for food in Cuba.  Now that’s not saying much as in general the island’s cuisine is not the most exciting, but still I had hoped for more than just one sauce, albeit tasty, which is served with different kinds of seafood. 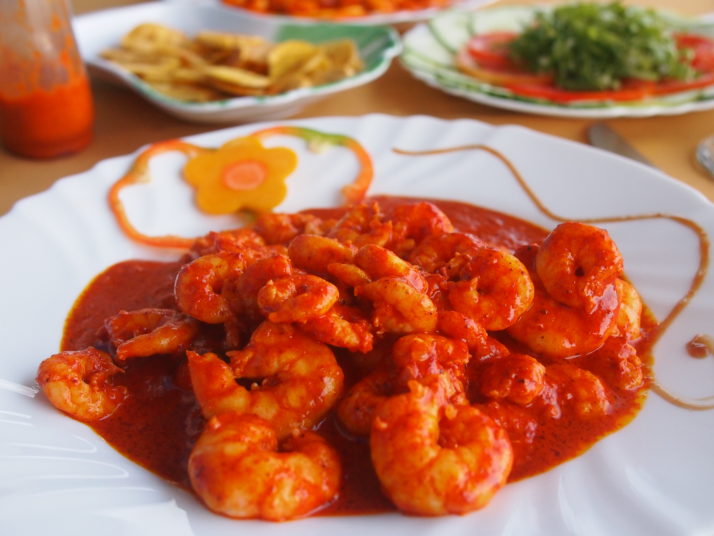 Prawns with the Baracoan sauce made from coconut milk, tomatoes, garlic and spices

Cucuruchos are the other regional specialty, a cone of palm leaf stuffed with an almost sickly sweet mixture of fruits, coconut and honey. Baracoa is the only region in Cuba where chocolate is grown and processed (the smell wafting from the factory just outside town reminded me of driving past the Rowntrees factory in York) and we really enjoyed the huge flask of hot chocolate that was included with our breakfast each morning. 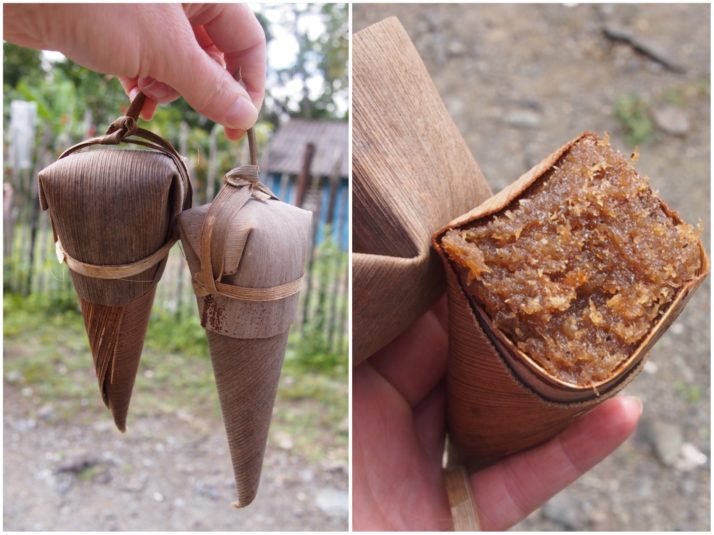 One thought on “Baracoa, Cuba”