We’d only planned a few days in Florence, and one of the main reasons for breaking up our journey through Italy en-route to Switzerland was the easy day-trip to Pisa, the local trains are frequent and take about an hour from the central Firenze SMN station to Pisa Centrale. 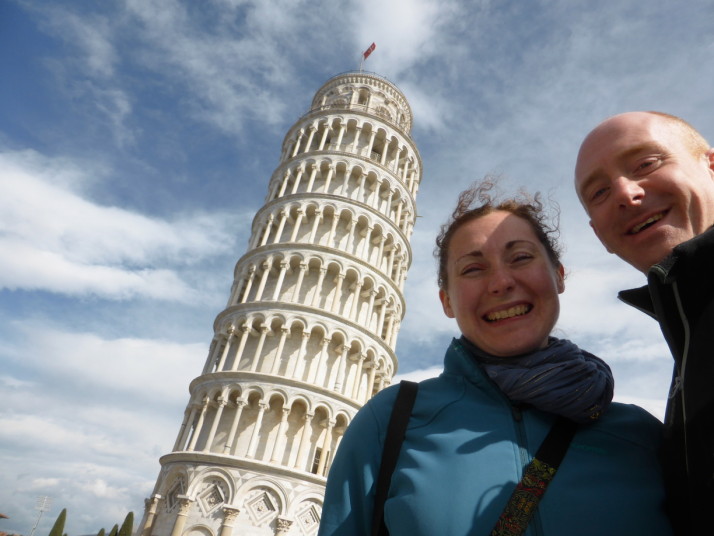 Us with the famous leaning tower of Pisa!

Situated at the mouth of the River Arno – the same river that flows through Florence – Pisa has a long history of education and is still a very prestigious place to study. It’s also the birthplace of the famous physicist, mathematician, engineer, astronomer, and philosopher Galileo Galilei.

Arriving in Pisa, we headed straight for the wonderfully named Piazza dei Miracoli – literally Square or Plaza of Miracles – the location of the town’s cathedral, baptistry, cemetery and of course, the world famous leaning bell tower of Pisa. 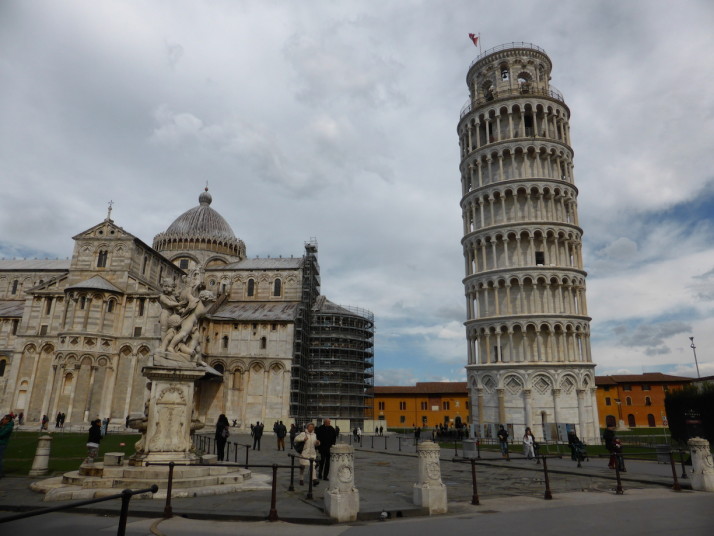 The view as we entered the Piazza dei Miracoli – wow! We’re here and there it is.. a monument that we’ve heard of so many times and seen in so many movies and photographs. Most vividly for me is the movie Superman III where evil Superman straightens it!) – it’s almost unbelievable

Climbing the tower is by allocated time slot, and thankfully we only had to wait 10 minutes. The tour started with a seat in the main central atrium where we were given a quick but comprehensive history of the tower (in English and Italian) before we were shown the stairs to start our ascent. 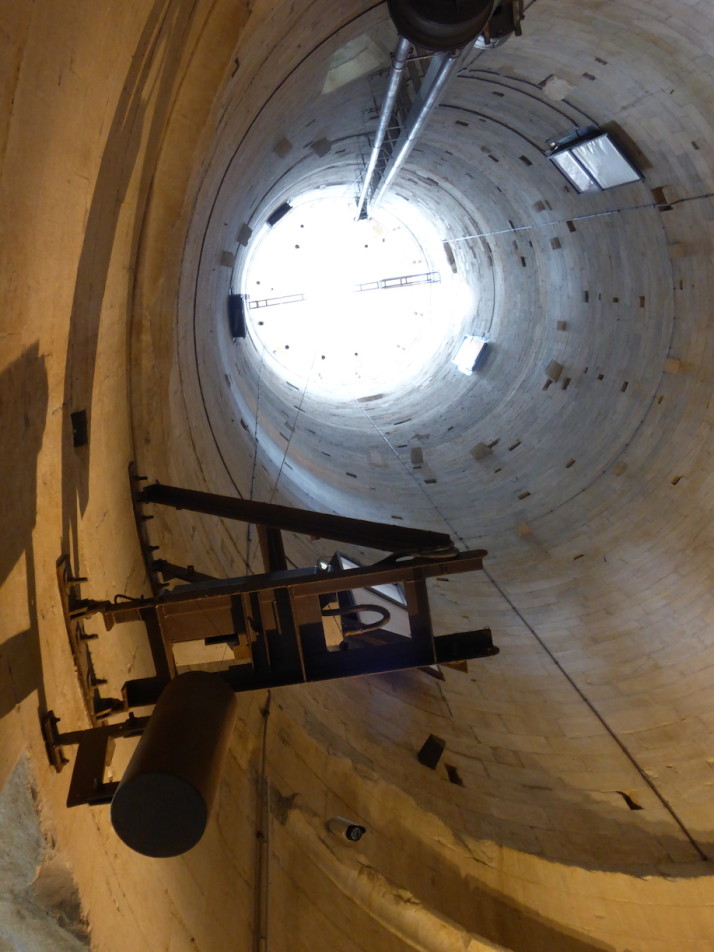 The floor of the central room is obviously sloped. This plumbline is hung from the centre of the 7th floor and almost touches the wall at head height on the ground floor! The lean of the tower has been reduced at various times over the years from 5.5° to ~4° today and is now structurally sound 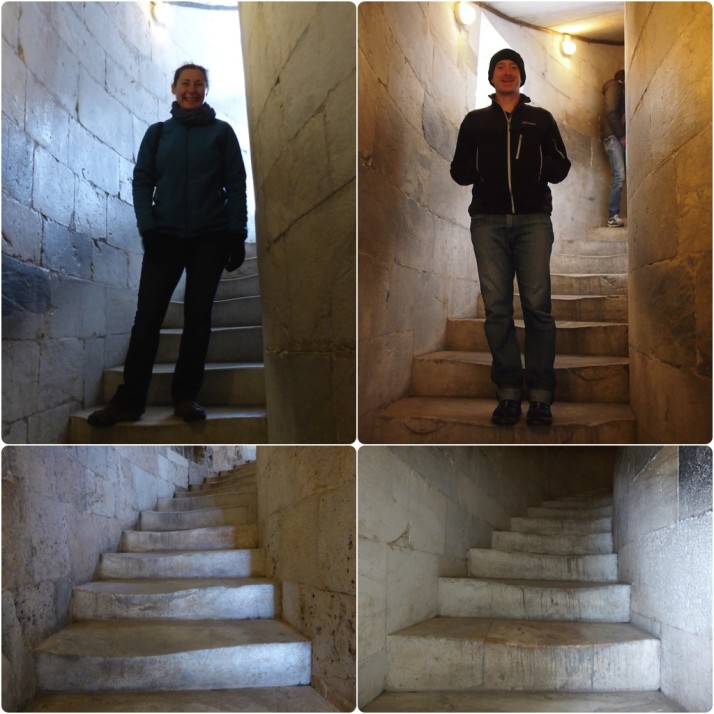 Unlike the staircase in St Peter’s Basilica that just leaned more and more to the right, the stairs in Pisa lean more and then less to the same way – it’s a very strange feeling! The wear on the steps moves from the middle to the left too 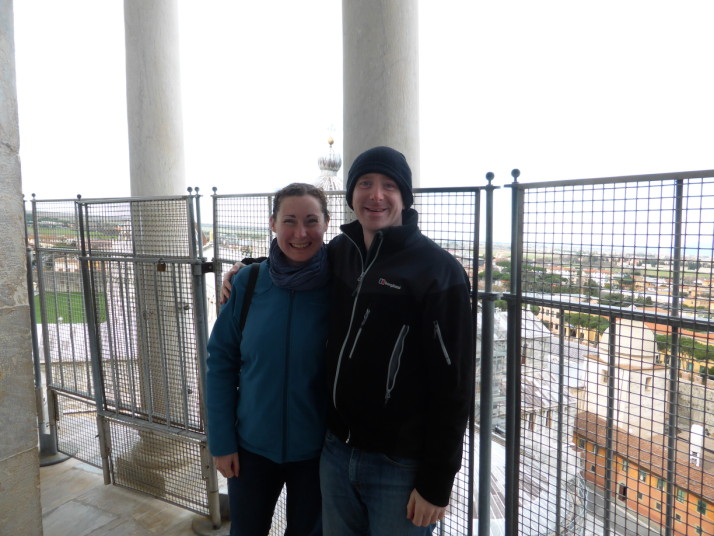 The Plaza of Miracles, from the 6th floor of the leaning tower of Pisa. There’s a 7th floor but it was closed because of the really high winds that had damaged roofs, felled trees, delayed a lot of mainline trains and caused one fatality in Tuscany 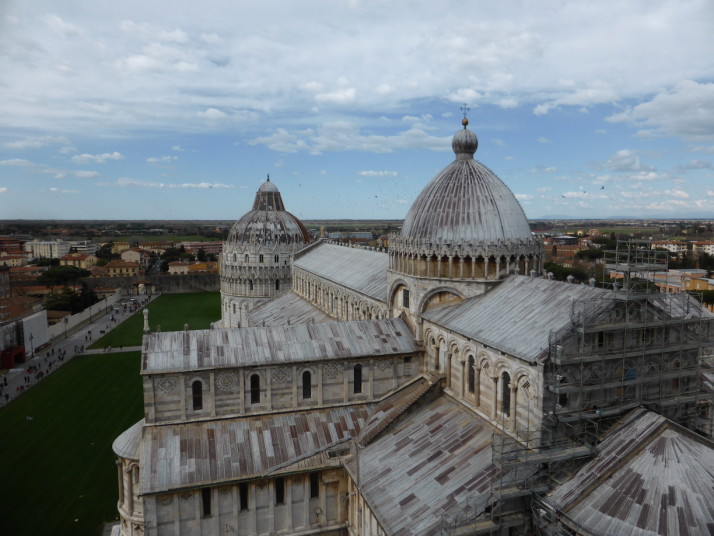 The view from the top of the Piazza and Pisa was well worth the climb. The strong, cold winds reminded us of the first bell tower we climbed in Riga at the start of our trip almost two years ago!

After a quick spot of lunch we did the second thing that you have to do when visiting Pisa.. 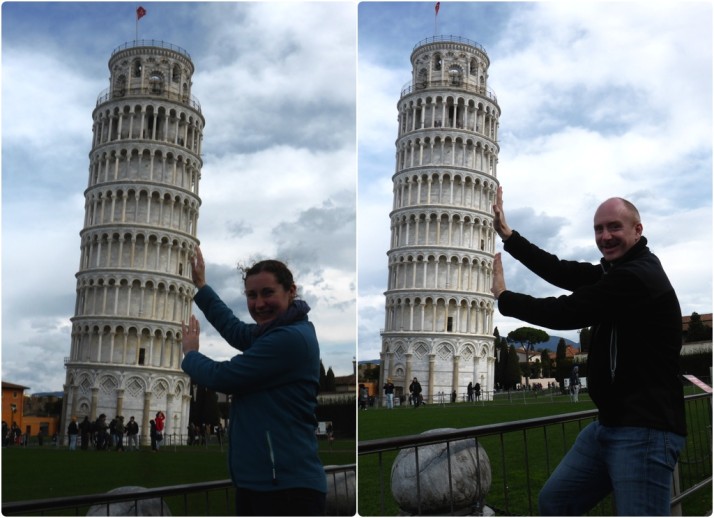 Just like the layout in Florence, Pisa’s Baptistry faces the main doors and is circular. It’s the largest in Italy and it’s also just a few centimetres taller than the leaning tower!

Next up we headed to the other end of the Duomo to visit the Baptistry. We really liked its half-Roman, half-ornate-Gothic exterior, and we were surprised we were able to go up into the 1st floor gallery inside. It has wonderful acoustics – the guard closes the door every half hour, stands in the middle of the room and sings a few notes that resonate for so long that he could create chords with his own voice! 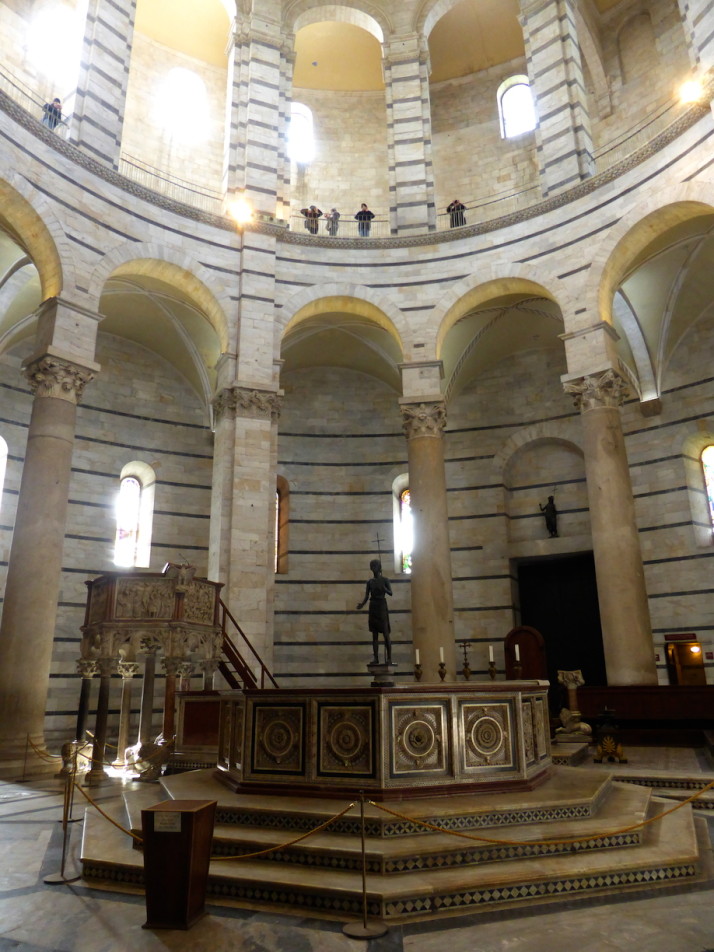 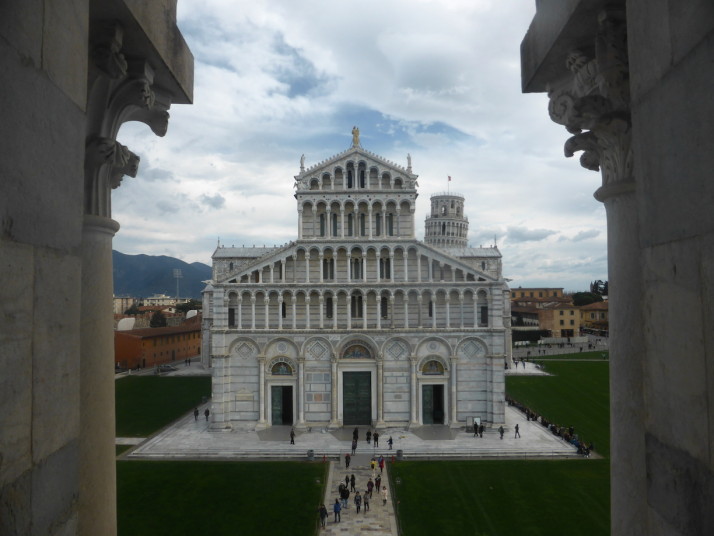 The Duomo or Cathedral of Pisa with the leaning tower peeping over its shoulder, as viewed from the gallery of the Baptistry

The central building of the Plaza of Miracles is the Pisa Cathedral. Started in 1064, inside it’s bright and airy and reminded us of Cefalù in Sicily, not least because the apse is filled with a similar Christ Pantocrator in beautiful gold mosaic. It also contains a pulpit that was sculpted between 1255-1260 by Giovanni Pisano – the classical style of the carving and sculpture is considered to be start of the Italian Renaissance (1260). 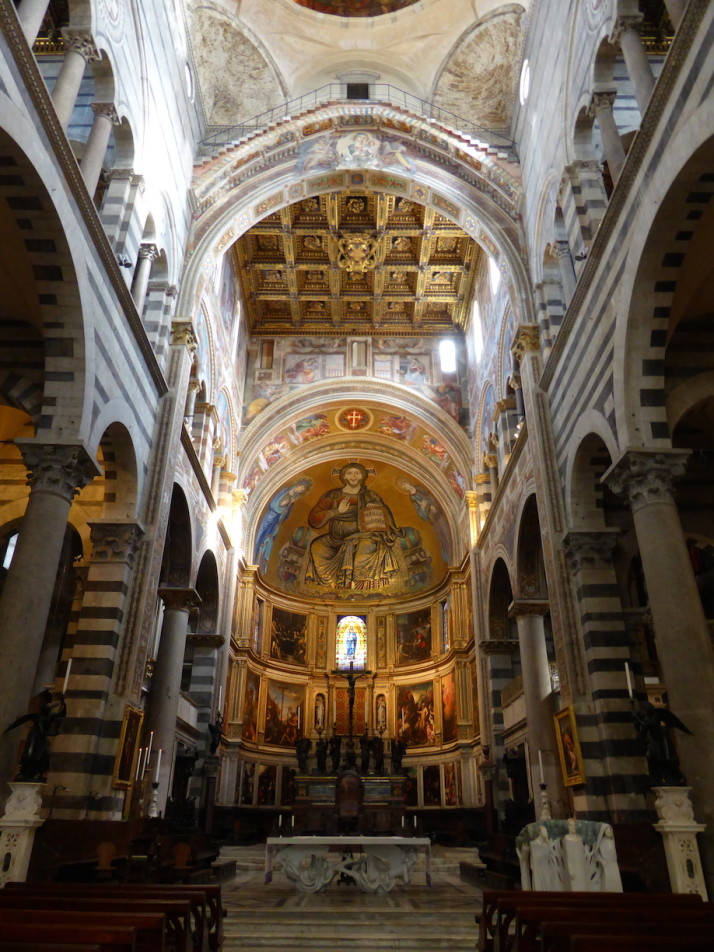 Pisa’s Duomo is much more impressive inside than Florence’s, the Christ Pantocrator mosaic in the nave reminded us of Cefalù in Sicily The spacious and empty Camposanto Monumentale. The huge frescos are slowly being restored from the original drawings

The last building of the Square of Miracles we visited was the Camposanto Monumentale, or Monumental Cemetery. It’s a massive Gothic cloister full of tombs. The floor is covered in worn out gravestones, sarcophagi line up along the lower walls and above them are the remains of giant frescos that were largely lost due to a fire in World War II. It was very peaceful with few visitors and we loved the long corridors. 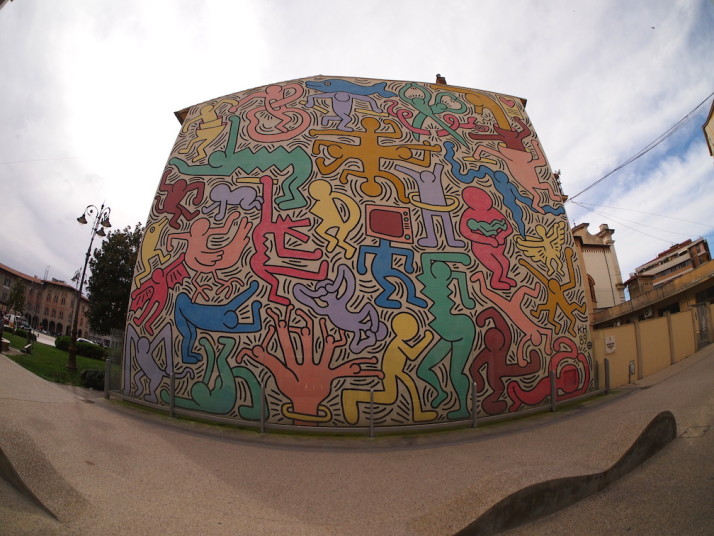 Just a block away from the train station is the last mural by Keith Haring called “Tuttomondo” (All world), painted on the side of the S. Antonio Church buildings in 1989. We instantly recognised his simple stylised characters though we didn’t know the artist or that this was his last public work.

Pisa is a great little city. We were really surprised how ornate the leaning tower is, and that because it started leaning early in its construction, subsequent levels where built smaller on one side to try and correct the lean which means it could be more accurately described as the leaning banana tower of Pisa!