The Rijksmuseum is the Netherlands National Museum devoted to art and history. It reopened in 2013 after a massive, decade long renovation project. The result is an excellent museum, where we happily spent a full day and still didn’t get round everything. Its precursor opened in 1800 in The Hague but that didn’t last long, within ten years it was moved to Amsterdam and in 1885 this custom built Gothic style building was opened in the south of the city. 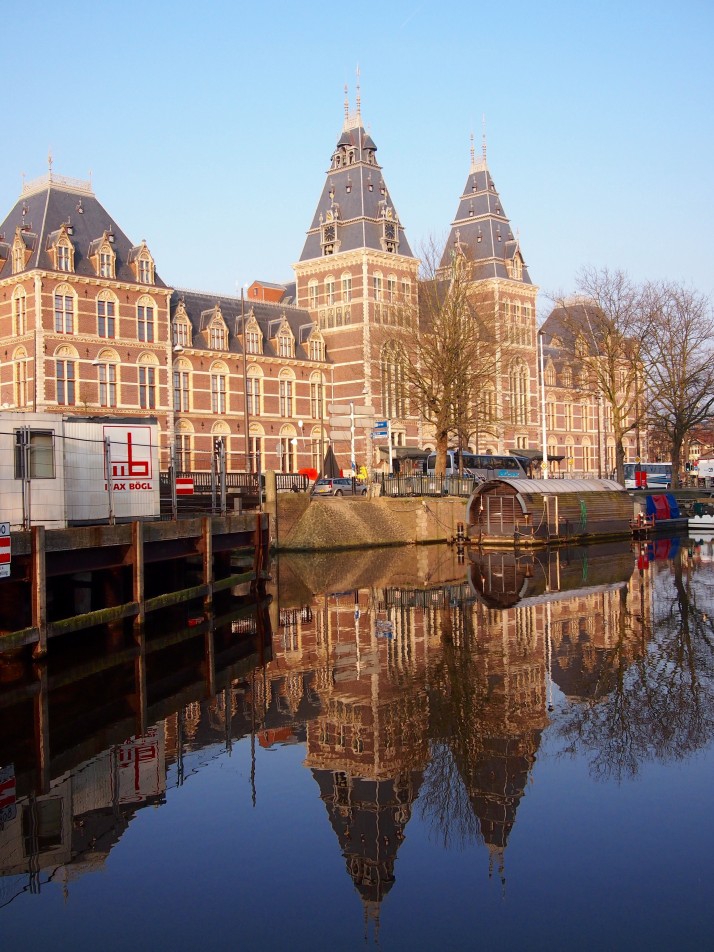 The Rijksmuseum is housed in this magnificent building

The museum’s centrepiece is ‘The Night Watch’ by Rembrandt. I’d read that it gets very busy around the painting as the day progresses so we headed straight there after the museum opened at 9am. It was definitely the right strategy as we were able to get a good look at the famous picture without the jostling and crowds that we found when we passed back through the gallery a couple of hours later. The Honour Gallery approaching Rembrandt’s ‘The Night Watch’ was deserted at 9.15am

We’d downloaded the Rijksmuseum’s free multimedia app onto our iPads (it’s identical to the one that you can rent at the museum for €5 so well worth it) and decided to begin by taking the 90 minute tour through the highlights of the 17th century galleries (basically the whole of the 2nd floor). This was the great Dutch Golden Age when the country was one of the world’s trade power houses with plenty of riches to finance high art. During the 17th century it was considered prestigious for groups of civic guards to have a portrait painted. ‘The Night Watch’ is an example of this but my favourite on display here is the ‘Banquet at the Crossbowman’s Guild in Celebration of the Treaty of Münster’ by Bartholomeus van der Helst. The audioguide explained the significance of the painting and also details that we might have missed like the reflections in one captain’s breastplate. 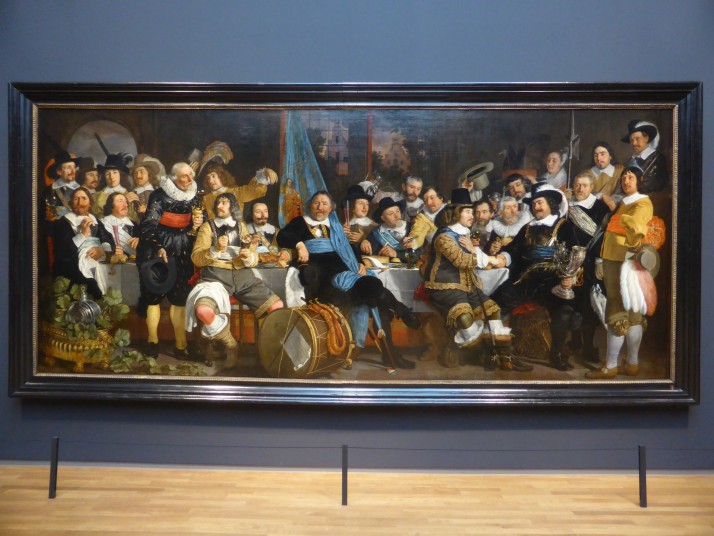 Scattered amongst the art are artefacts which tell the history in a more personal way, for example, the cabinet of knitted hats which belonged to Dutch whalers who worked in Spitsbergen during the 1700s and were recovered during archaeological excavations of the graves in 1980 – the case’s sign explains:

The skeletons were still wearing their knitted woollen caps. Each cap was individualized; the men recognised one another only by the pattern of stripes on the caps. The men were bundled up so tightly against the fierce cold that only their eyes were visible. 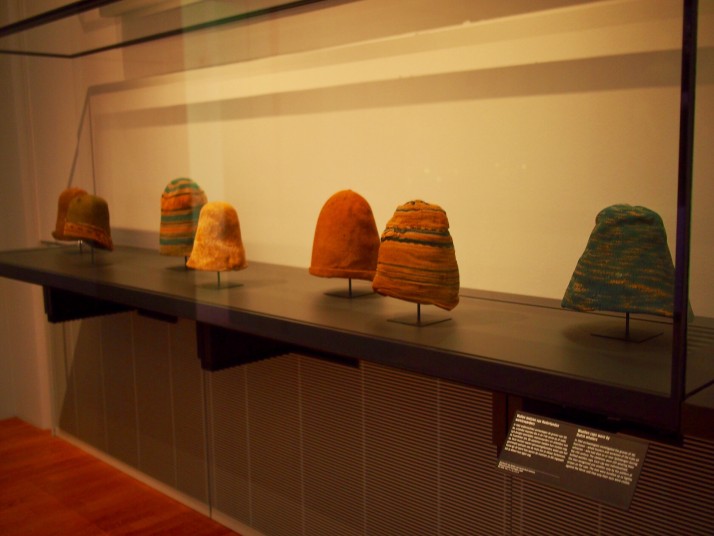 Woollen caps worn by Dutch whalers in the 1700s

The Rijksmuseum’s library contains around 450,000 volumes and acts as an art history research library. It is open to the public as a reading room and for academic research. 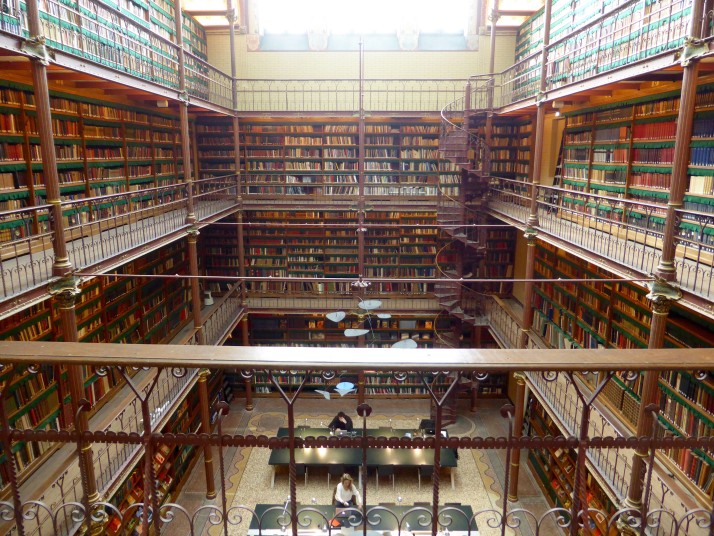 Looking down into the Rijksmuseum’s library

While the Dutch men were off trading and conquering the world their wives were left at home twiddling their thumbs. To counteract the boredom (and get through quite a bit of the gold that was piling up) wealthy Dutch ladies furnished doll’s houses which they would then show off to their friends. We were flabbergasted by the detail that went into these, including commissioning a doll sized porcelain dinner service from China! 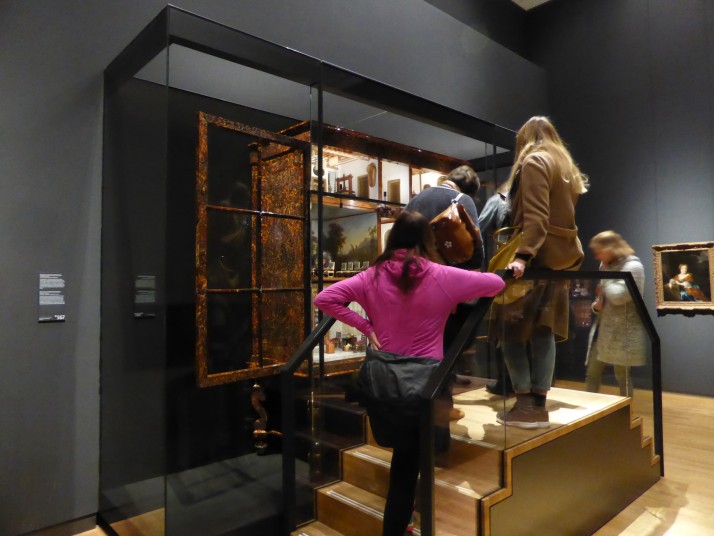 One of the magnificent doll’s houses, complete with working sink in the kitchen!

The 17th century was also the start of the Dutch obsession with tulips and cut flowers. These were very expensive and to show them off to their best advantage they were individually placed in the corners of huge flower pyramids. 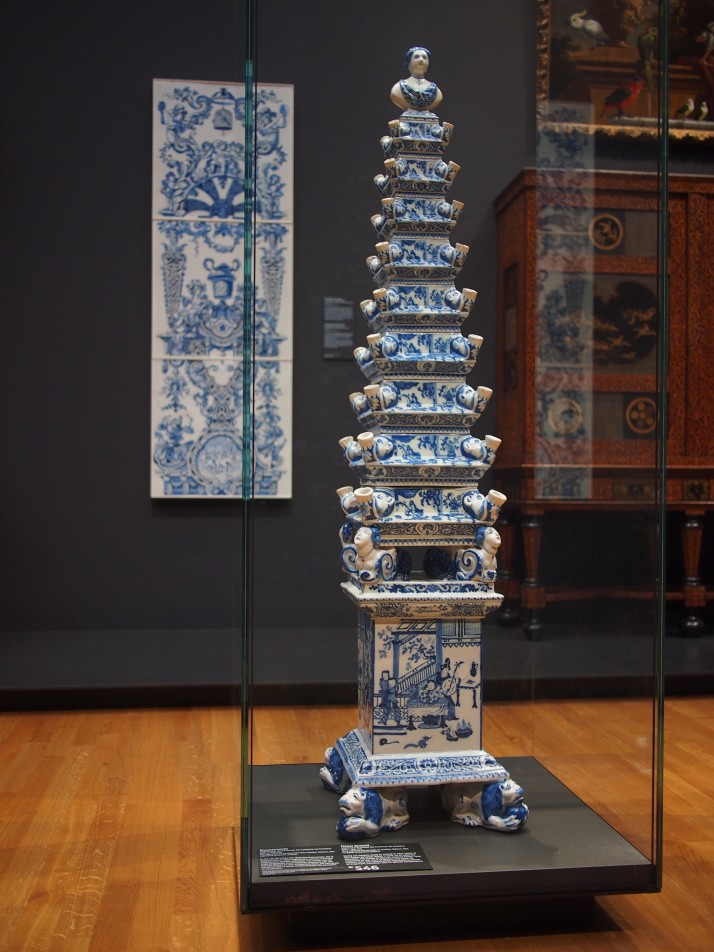 Flower pyramid in the Delftware gallery

On the third floor is the museum’s small collection devoted to the 20th century. It was much less detailed than the 17th century galleries and heavier on the historical items rather than artworks, for example a Nazi chess set with soldier figures representing the pawns and planes, tanks and rocket launchers for the other pieces, is contrasted with the concentration camp jacket of a Dutch woman who was interred from 1943-45. Highlights from the 20th century galleries (clockwise from left): Dress by Yves Saint Laurent inspired by the work of Dutch artist Piet Mondrian; the F.K. 23 Bantam was designed by a Dutchman for a British aircraft factory during WWI; ‘The Square Man’ by Karel Appel

By this stage we were ready for a rest and so we retreated to the museum’s beautiful airy cafe for a sandwich and a much needed cup of coffee. 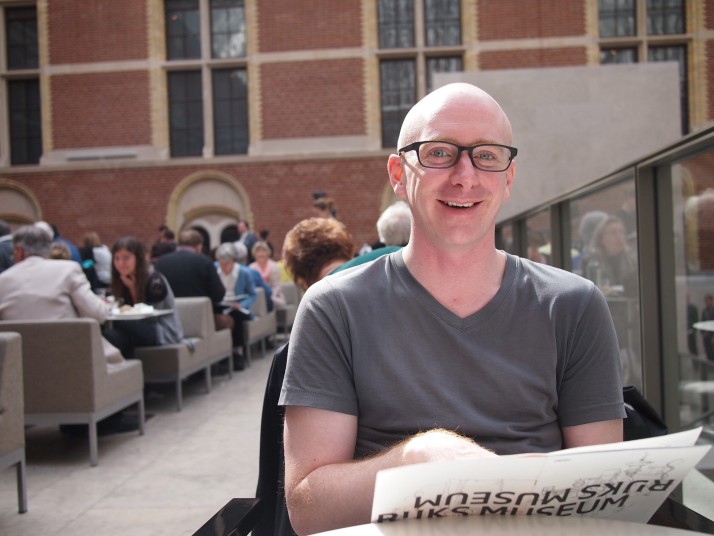 Andrew browsing the tempting sandwich menu in the Rijksmuseum’s cafe

The building itself is nearly as interesting as the exhibits it contains. The cafe, ticket office and shop are situated in a newly built underground area which was a complex engineering project as it is below sea level. Moving between the east and west wings of the museum necessitates passing either through this basement or through the Great Hall on the second floor as the ground floor is bisected by a cycle path. The renovation project team wished to close this off to link the two sides of the museum, but the bicycle mad public vetoed the plans. 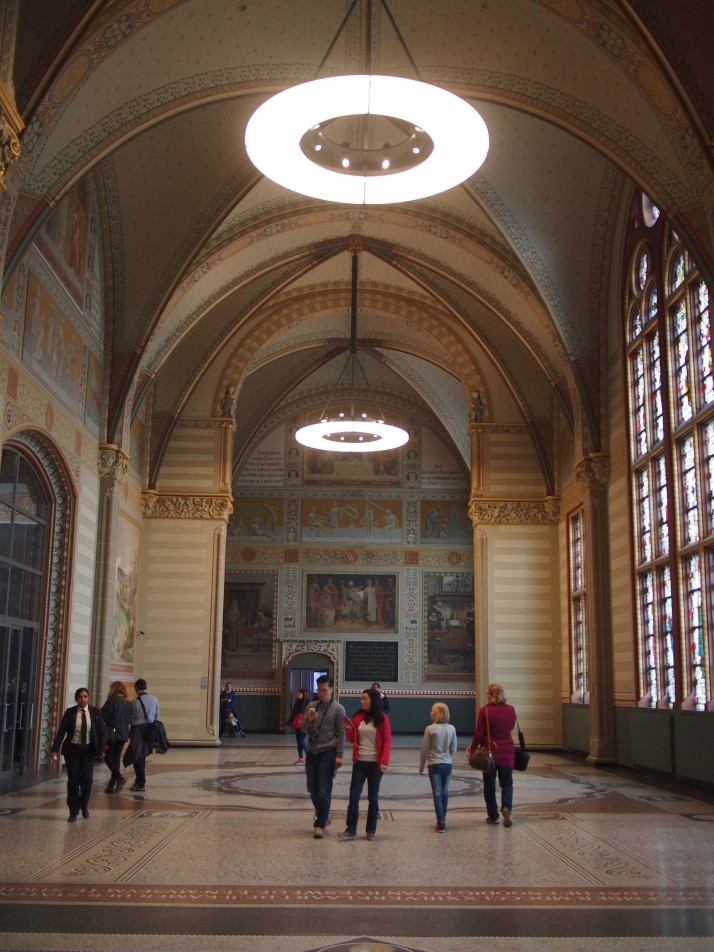 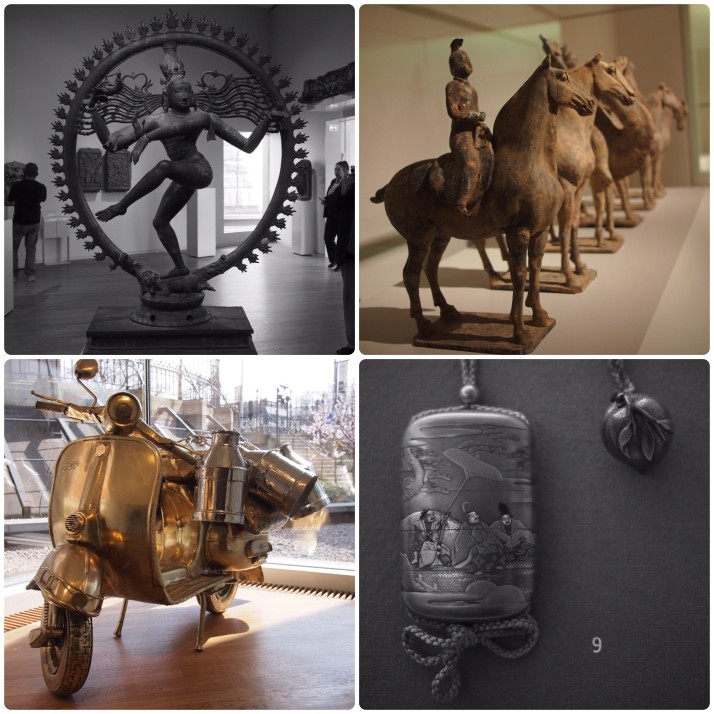 Asian Pavilion (clockwise from top left): Hindu god Shiva; artefacts from a tomb near Xi’an in China; Japanese inro, a small box which hangs from the kimono sash and is secured above by a netsuke; we liked this modern artwork by Indian artist, Subodh Gupta 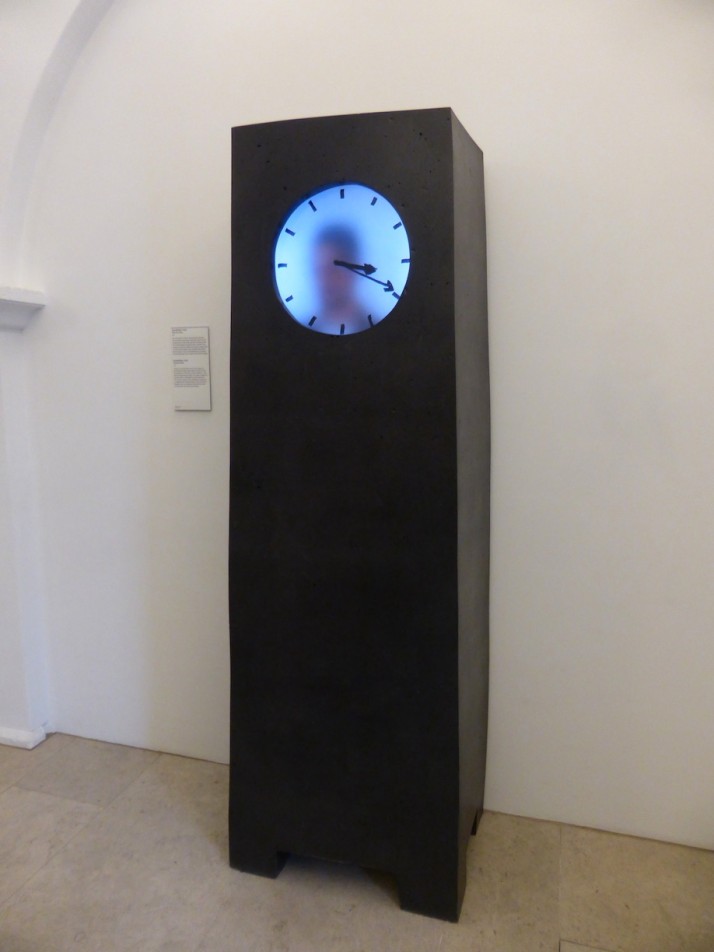 This ‘Grandfather Clock’ by Maarten Baas made us smile. Every minute the “man” inside wipes off the minute hand and draws a new one!

Dutch colonial history is represented throughout the museum but on the first floor is a whole room showcasing items from this aspect of the country’s past. I particularly liked the cannon with a dragon’s head and we both recognised the model of Dejima, the small island to which Dutch traders were confined in Nagasaki.

We spent the last twenty minutes of our visit speeding through the Special Collections section, a group of galleries with everything from model ships to dinner sets to fashion and jewellery. 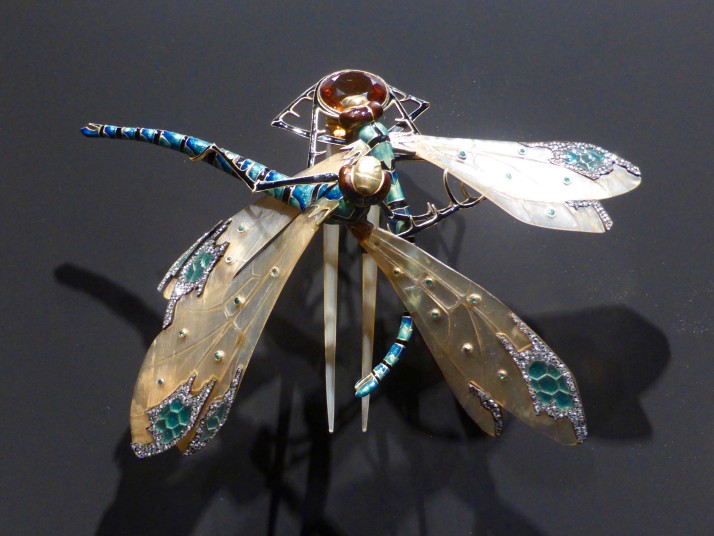 Although we spent a full day in the museum we could have stayed for longer. The variety of the exhibits kept us interested and the information about the displays both in the galleries and in the multimedia tour were excellent.