You’ve probably heard of Tian’anmen Square already, and seen part of it in the most famous photograph of Beijing outside China.. 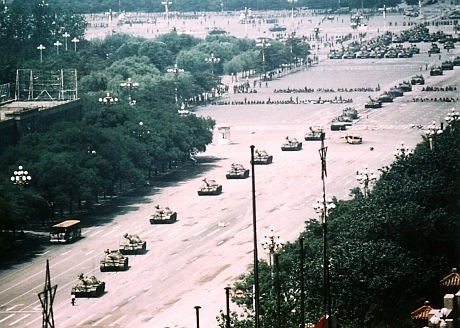 Nowadays Beijing’s central public space is ring-fenced and encircled by busy roads, CCTV cameras, and almost as many police as there are visiting tourists. Access is by underpass and through X-ray bag searches like you’re about to board an aeroplane (incidentally, the Metro has the same security checks). 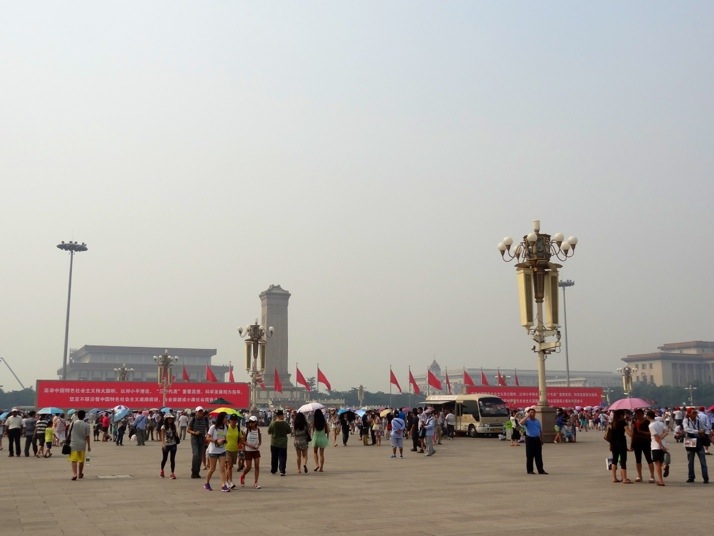 Tian’anmen Square today. The column is The Monument to the People’s Heroes, and the top of Mao Zedong’s mausoleum is in the background to the left

The square is flanked by two imposing government buildings that were designed and built in a Soviet Russian style in 1959; The National Museum of China to the east, and The Great Hall of the People on the west. To the south are two beautiful and imposing gate houses that are almost all that remains of the old Beijing city walls. 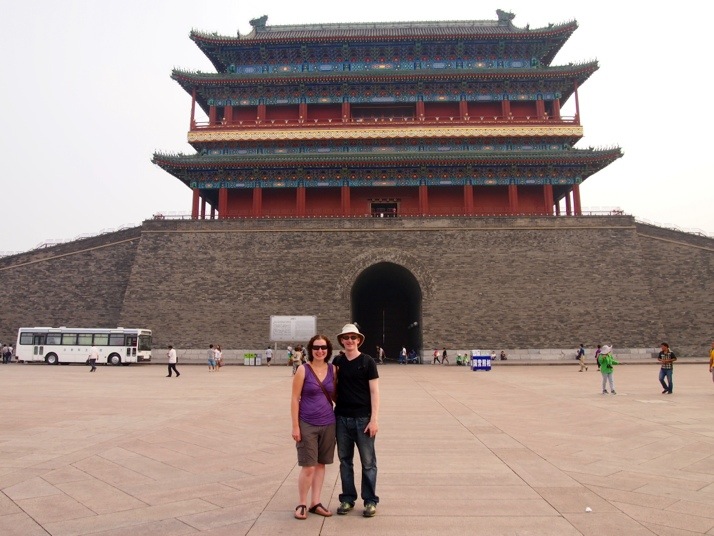 Us in front of Qianmen, the inner of the two city gates

To the north, beyond the smiling portrait of Mao facing the square is the Forbidden City. Built in the Ming Dynasty by the Yongle Emperor Zhu Di, and home to his consorts, concubines, visiting officials and successive Emperors, it was forbidden for ordinary folk to enter under penalty of immediate execution. The rules have been relaxed considerably since it became a museum in 1925, and now it seems only feather dusters are forbidden. 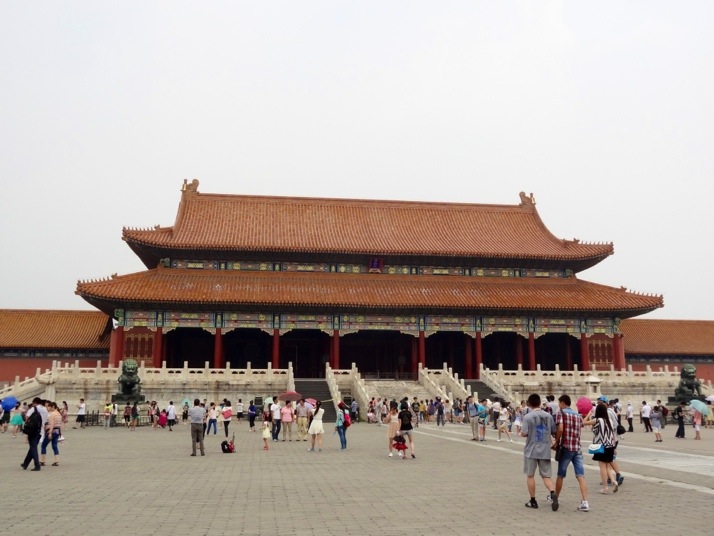 The Gate of Supreme Harmony, the first of the many palaces, courtyards and temple-like gatehouses inside the Forbidden City

The Forbidden City is aptly named for its sheer scale, it is immense. We visited twice, firstly with our new friends Maxime and Armelle whom we met in Mongolia, and their new friends Julia & Jõan and A.C. whom they met on the train into China, and again with Julie’s parents, and we still didn’t see it all. 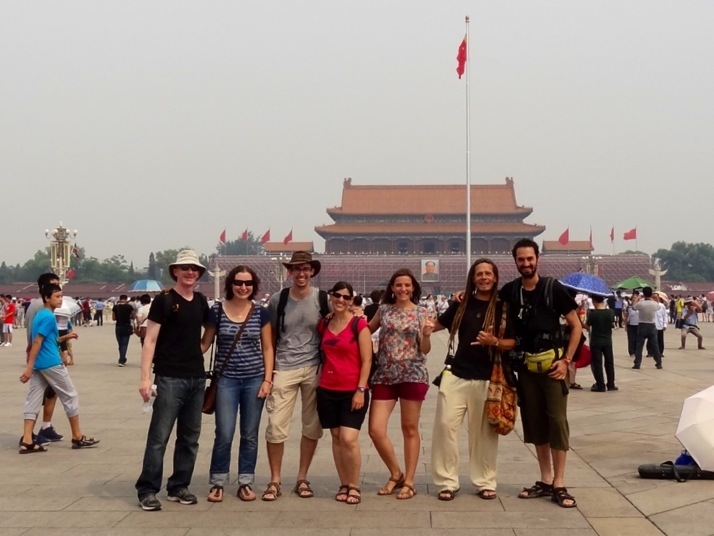 From left to right: Me & Julie, Maxime & Armelle, Julia, A.C. and Jõan on Tian’anmen Square in front of the Meridian Gate, the main entrance to the Forbidden City 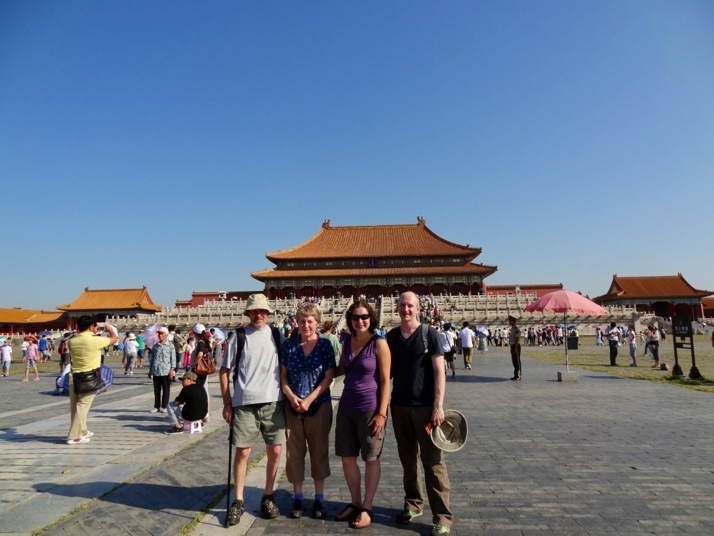 Norman, Moira, Julie & I in front of the Hall of Supreme Harmony

The buildings are beautiful with their curved-edge roofs adorned with glazed figurines, and each one has a delightful name, such as The Gate of Divine Might, The Hall of Mental Cultivation or The Palace of Tranquil Longevity.

Right smack in the centre of the city is The Hall of Supreme Harmony which marks the border between the outer (southern) and inner courts and where the space and scale immediately shrinks. The buildings beyond are just as intricate but are more varied in their design. Vast open spaces give way to walled corridors leading to intimate courtyards where we found trees, rocks and metal animal statues. This makes sense as the inner court was the home of the Emperor & Empress, and where the administrative functions of the empire took place, while the outer court was used for ceremonies. 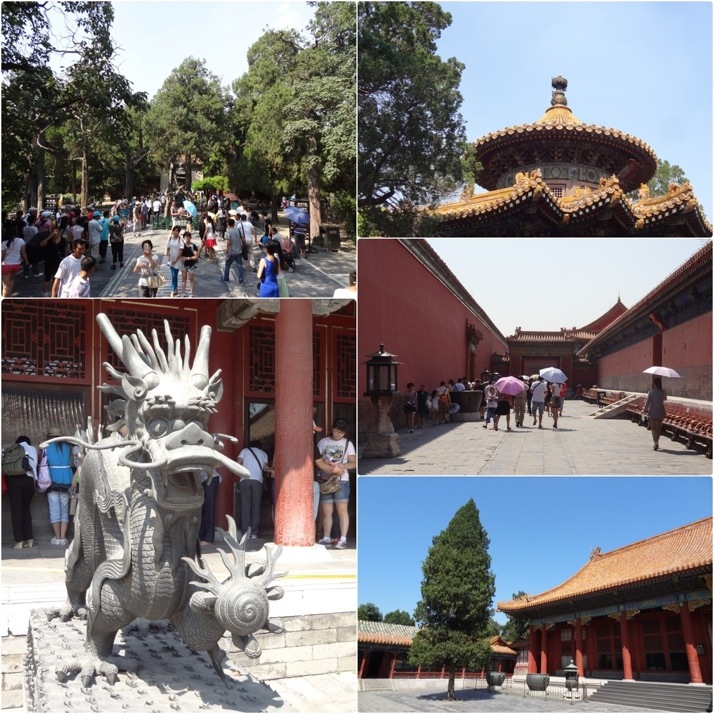 The inner court, much more intimate (and just as busy!) but still as splendid

The Forbidden City is officially known as the Palace Museum, and its collection is huge. Here’s an excerpt from Wikipedia:

Today, there are over a million rare and valuable works of art in the permanent collection of the Palace Museum, including paintings, ceramics, seals, steles, sculptures, inscribed wares, bronze wares, enamel objects, etc. According to an inventory of the Museum’s collection conducted between 2004 and 2010, the Palace Museum holds a total of 1,807,558 artifacts and includes 1,684,490 items designated as nationally protected “valuable cultural relics.”

Easily worth the additional ¥10 entrance fee (which works out at about £1 each), the hall of clocks was one of our favourite exhibits in the Forbidden City, not least because the majority of the ingenious clocks on display were made in England! 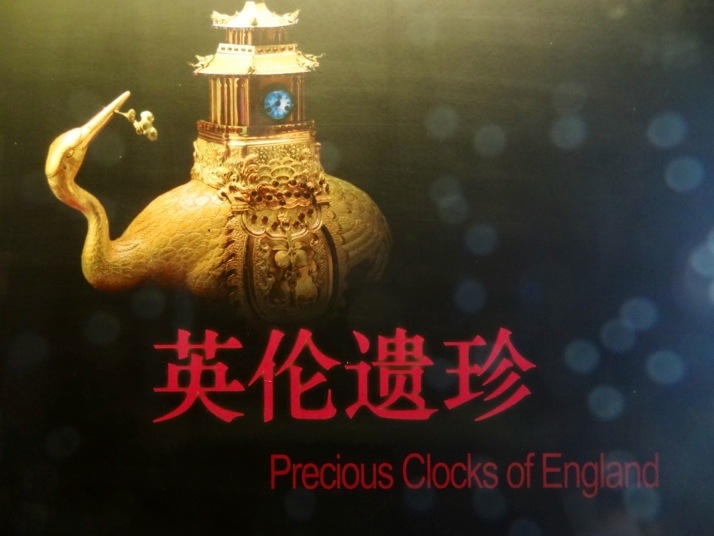 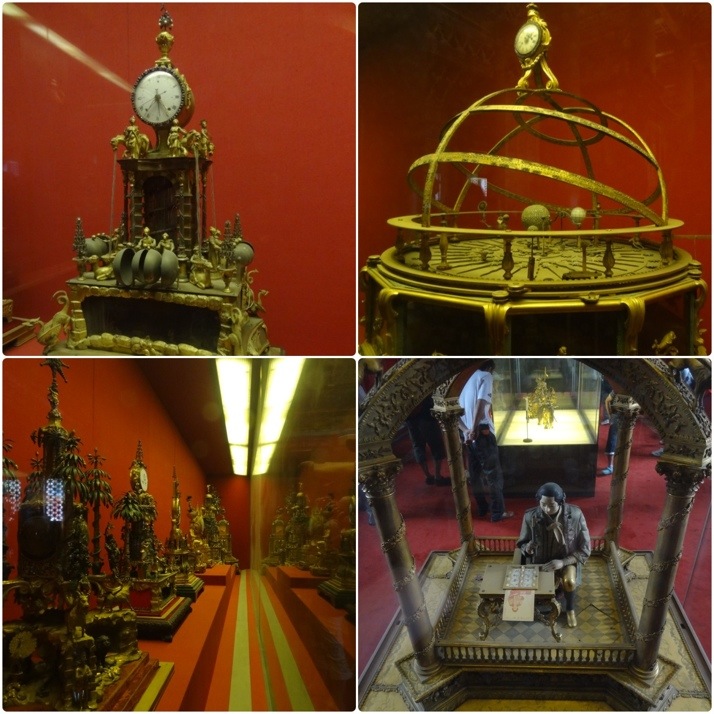 It’s hard to pick just a few from the vast and varied collection. Clockwise from top-left: gilt copper clock decorated with revolving waterfalls and figures striking bells; Astronomy clock; one of the 5 England clocks display cabinets in the main hall; Gilt copper clock with figure writing Chinese characters with a brush (Williamson of London, c.1790) 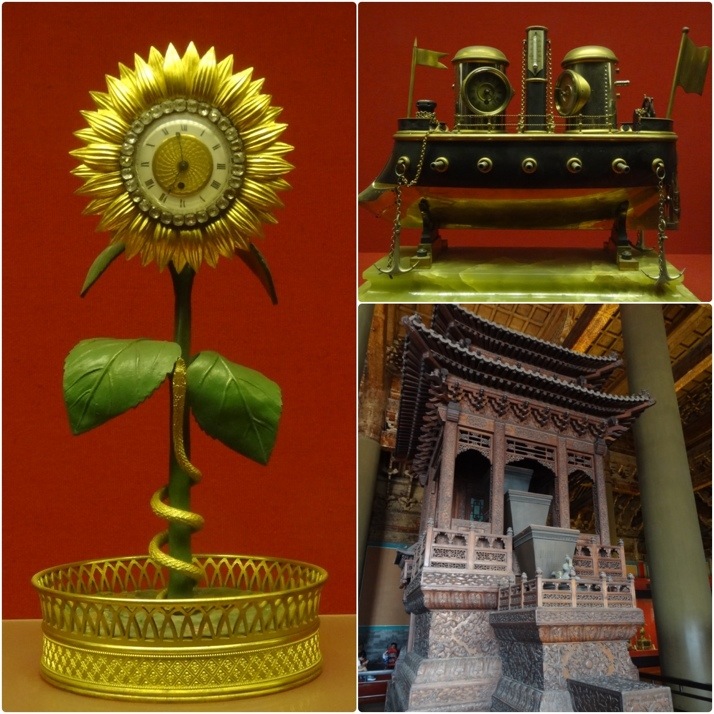 The other additional cost exhibition, also ¥10, is the Treasure Gallery, and we certainly got our money’s worth.
The courtyard of the Treasure Gallery contains a vibrant 9 dragon screen. It’s not as big as the one we saw in Datong, but that made it easier to photograph! 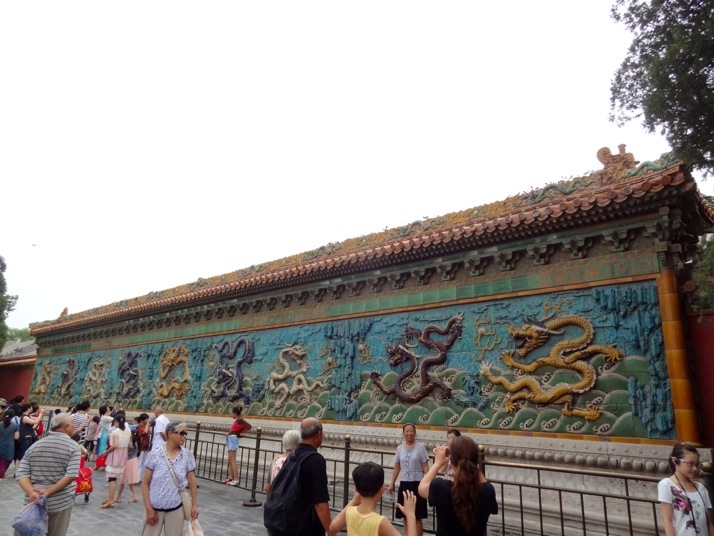 The 9 dragon screen in the Forbidden City. Smaller and busier than Datong

The Treasure Gallery itself displays some of the rarest and most valuable items in the Palace Museum collection. Some of the more popular pieces are a little difficult to see if the halls are busy, and we found Indian-style queuing to be in effect. Patience was definitely needed. 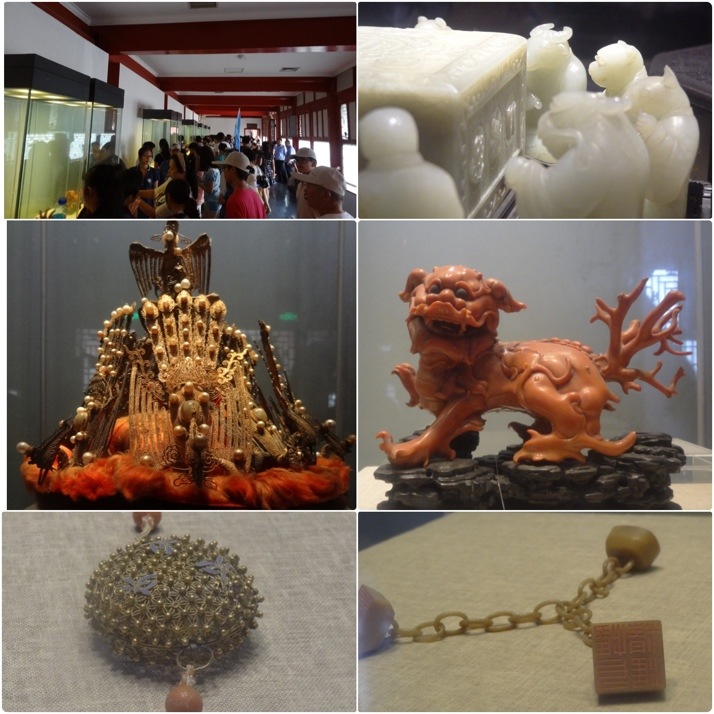 Opposite the jewellery and precious stones exhibits, are the impressive sounding Stone Drum halls (sounds impressive to me anyway, as I used to play the drums). And while the exhibit is nicely laid out and the drums themselves are very important given that their inscriptions recount social events from almost two centuries ago, they weren’t actually that impressive. 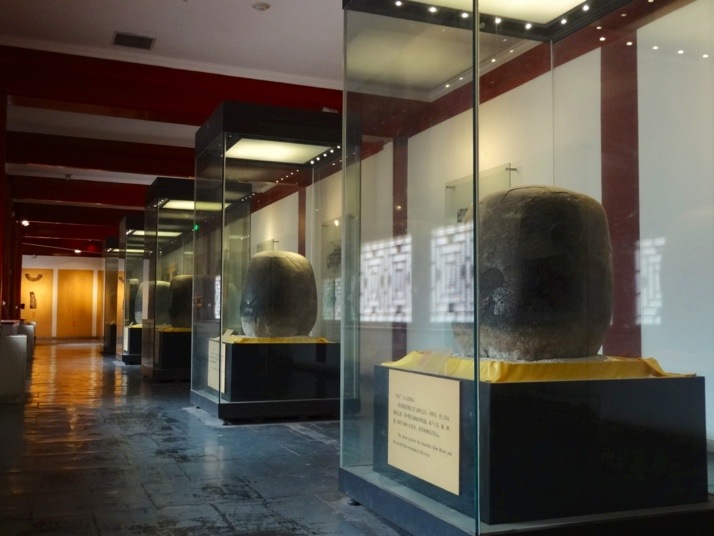 The Stone Drums – no queuing in this exhibit. The inscriptions invariably recount a visiting official, a hunting trip and a feast. Kind of like the Facebook status updates of the day

Continuing up the eastern side of the inner court, the Treasure Gallery also includes the inner court’s theatre, and halls containing beautiful court seals, bells, and huge carved stones – sadly all covered with a layer of Qing Dynasty-era dust (hence my earlier quip about forbidden feather dusters). 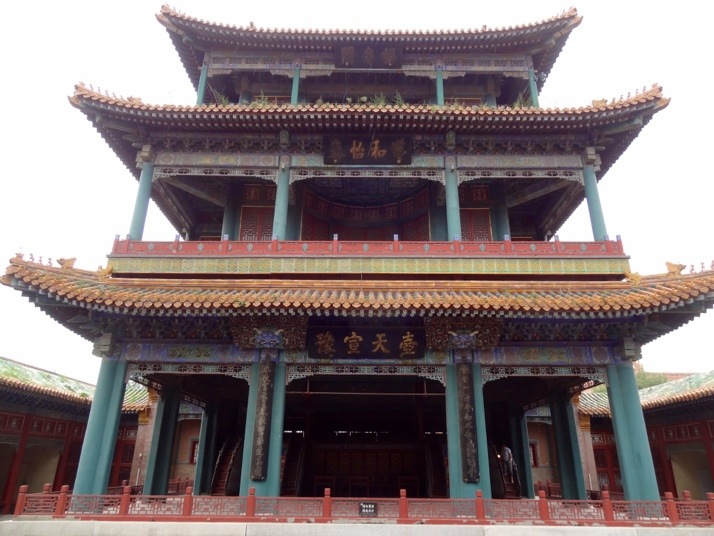 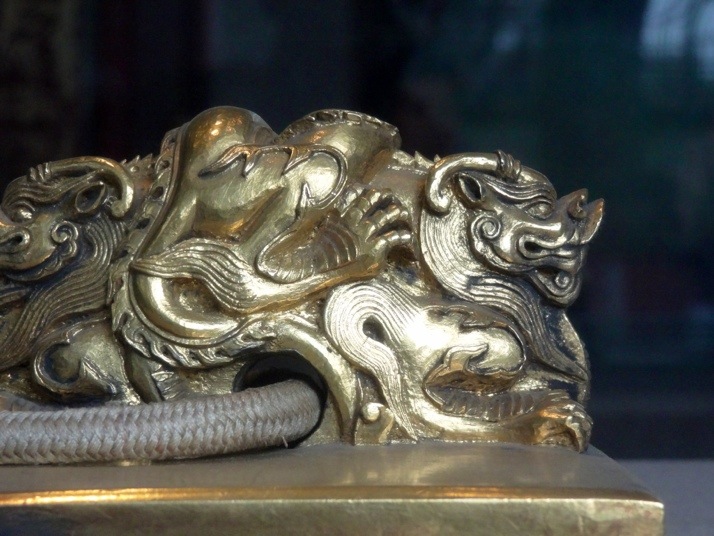 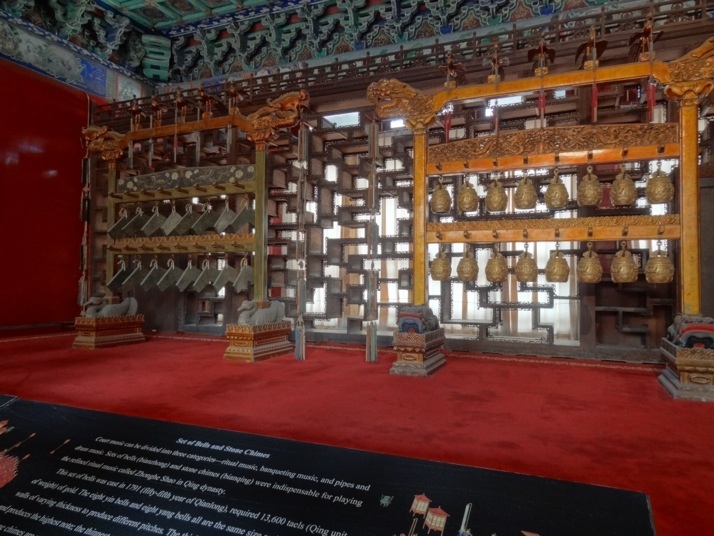 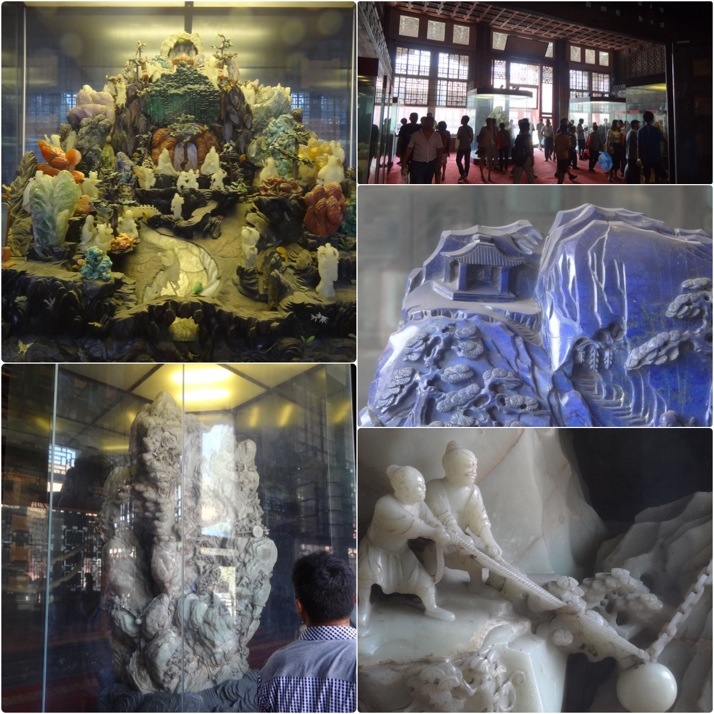 Clockwise from top left: Centrepiece of the carved rocks exhibit “Jade Terrace”; the exhibit hall; close-up of “Lapis lazuli hill carved with landscape” (Qing Dynasty); “Da Yu curbing the flood, a Jade Mountain”, close up; and the whole thing to give you a sense of scale

The western side of the Forbidden City consists of lots of smaller buildings and quaint courtyards, culminating in the central gardens before the northern exit. 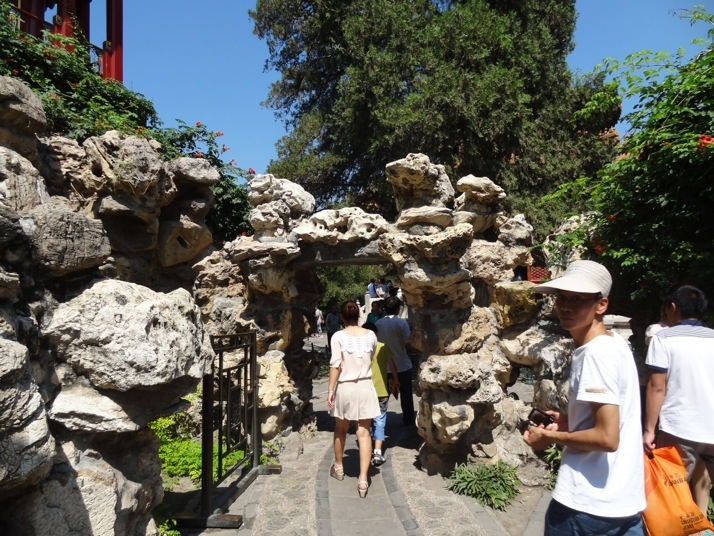 Rock garden, Qing Dynasty style – here you can walk through the rocks!

Immediately north of the Forbidden City is Jingshan Park, and we just about had the energy left in our legs after a full-day of sightseeing to walk up the steps of the highest of the five peaks in this man-made park. Feng Shui says its favourable to site a residence to the south of a hill, but Marco Polo had the same thought I did when I got to the top and looked down on the centre of (what was) the imperial capital – it’d be a good place to attack it from.

Nevertheless, the views back over the Forbidden City are astounding: 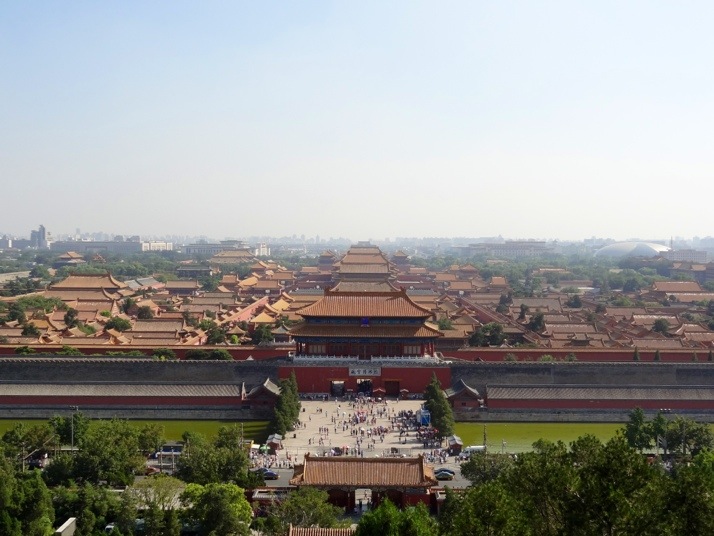 View south over the Forbidden City from Jingshan Park

And then we looked down at our feet to find we were in the very centre of Beijing! 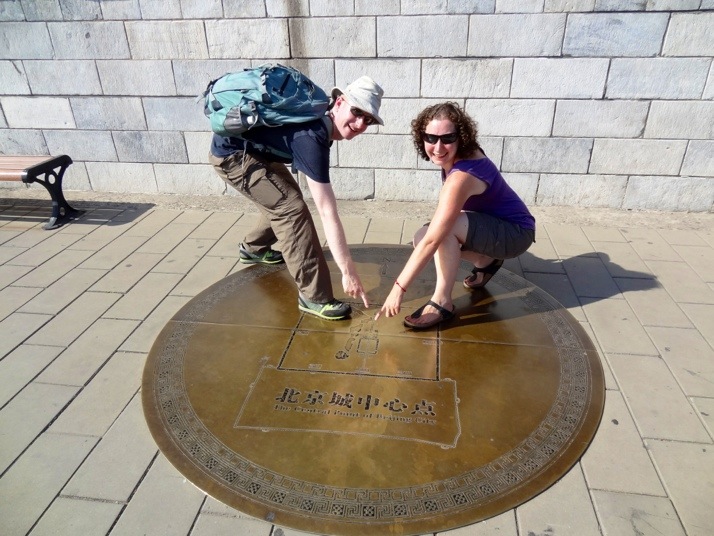 Us in the the centre of Beijing!

6 thoughts on “Tian’anmen Square and the Forbidden City, Beijing”