Chiang Mai in northern Thailand boasts over 200 buddhist temples. That’s a lot and while we have been here for 2 months we didn’t set out to see them all, and nor have we. This is a rundown of the ones we have seen and what we liked about them.

But before we begin, what is a wat?

A wat is a monastery temple in Thailand, Cambodia, or Laos. The word wat means “school”.

Strictly speaking a wat is a Buddhist sacred precinct with monks’ quarters, the temple proper, an edifice housing a large image of Buddha, and a structure for lessons. A Buddhist site without a minimum of three resident monks cannot correctly be described as a wat, although the term is frequently used more loosely, even for ruins of ancient temples.

A typical Buddhist wat consists of [many] buildings, including a
chaidei or chedi – usually conical or bell-shaped buildings, often containing relics of Buddha 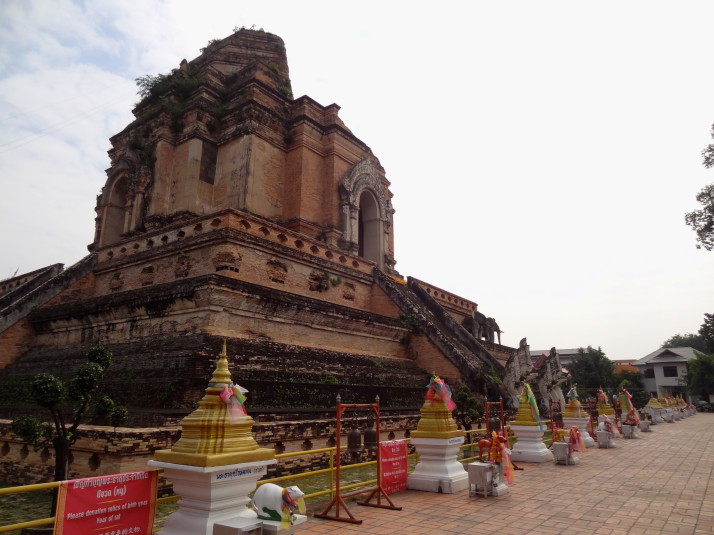 Wat Chedi Luang: The one with the giant brick Chedi

Wat Chedi Luang is the Grand-daddy of Chiang Mai’s wats. Almost dead-centre of the square walled city, its giant decaying brick chedi can be seen for miles around – even from the top of nearby Doi Suthep mountain!
The large main temple with its beautiful gold columns sets the expectations for this expansive wat. Everything about it is oversized which created a feeling of being really small as we wandered around. 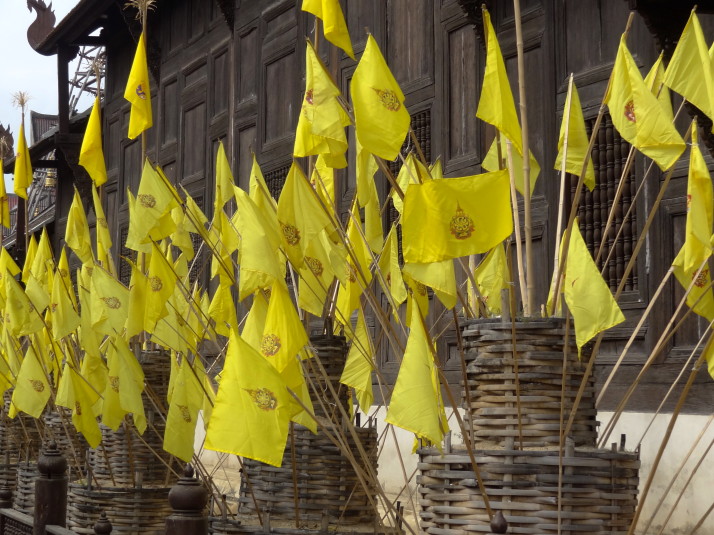 Wat Phan Tao: The small one with the bright yellow flags

Wat Phan Tao is next door to the mighty Wat Chedi Luang and it knows it. In no way does it try to upstage, instead playing the contrast card with its much smaller, more intimate setting. We loved the bright yellow flags that adorn the side of the main temple, the ornate gateway from the street, the heavy prayer-bells and the pond full of turtles. 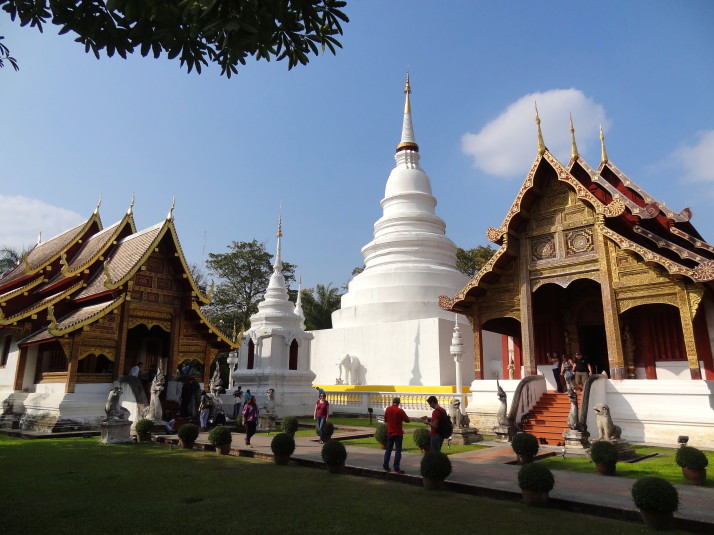 Wat Phra Singh: The immaculately kept one with lots to see

Still within the city walls, Wat Phra Singh is the Pepsi to the Wat Chedi Luang’s Coke. Located at the eastern end of the Sunday night walking street market that runs the width of the city, and with easier access for coaches, Wat Phra Singh gets more visitors. Like Wat Chedi Luang it’s also immaculately kept, and while it feels more compact, there are more temples that can be visited inside its grounds. Each of the temples has its own distinct character, and speaking of characters, some wats have very lifelike fibreglass models of their most venerated monks, and we counted 4 here. They’re almost a little too lifelike, and it’s a bit spooky having a fake monk staring at you! 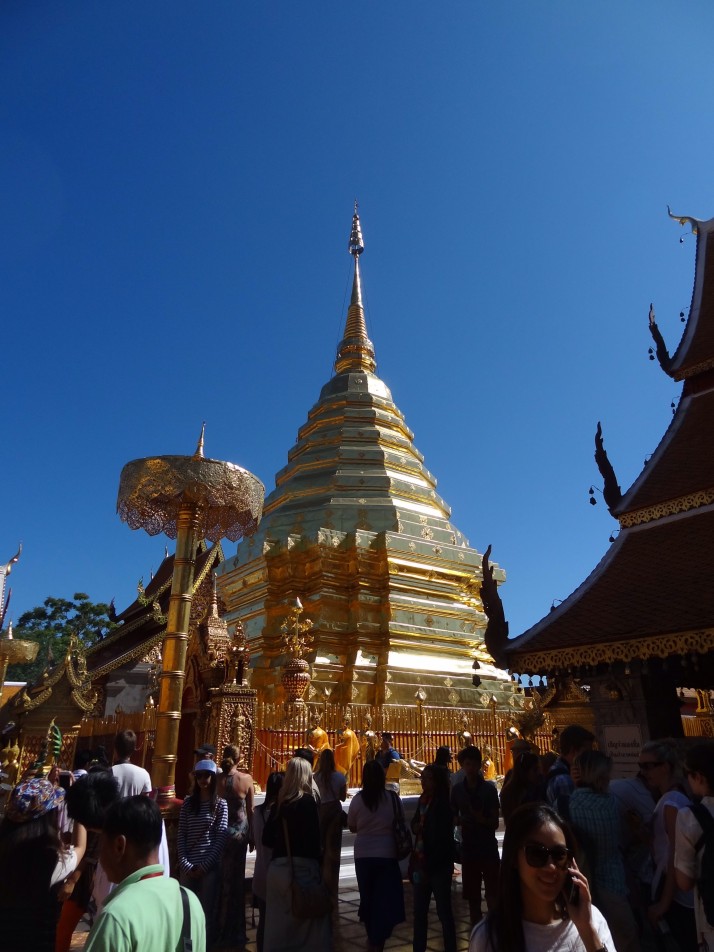 Wat Phrathat Doi Suthep: The one with the golden Chedi, on the hill overlooking Chiang Mai

Wat Phrathat Doi Suthep (or simply Wat Doi Suthep) is the wat that everyone tries to visit when in Chiang Mai, and for very good reasons. First of all it’s a lovely ride into the hills of the Doi Suthep National Park, with plenty of viewpoints, waterfalls and small hikes if you want a break from the wide twisty roads, and secondly, if you’re on a scooter, you’ll love those wide twisty roads ;o)
Wat Doi Suthep is compact, very busy and very, very bright because almost everything is covered in gold. We were there on a typical Chiang Mai sunny day and the gold-covered chedi was almost too painful to look at!
There are small temples at the cardinals of the chedi where over half of the worshipping floor space is taken by offerings, and all welcome photography. We loved the glistering spectacle of the chedi and its inner hilltop courtyard, and the views over Chiang Mai – see if you can spot Wat Chedi Luang! 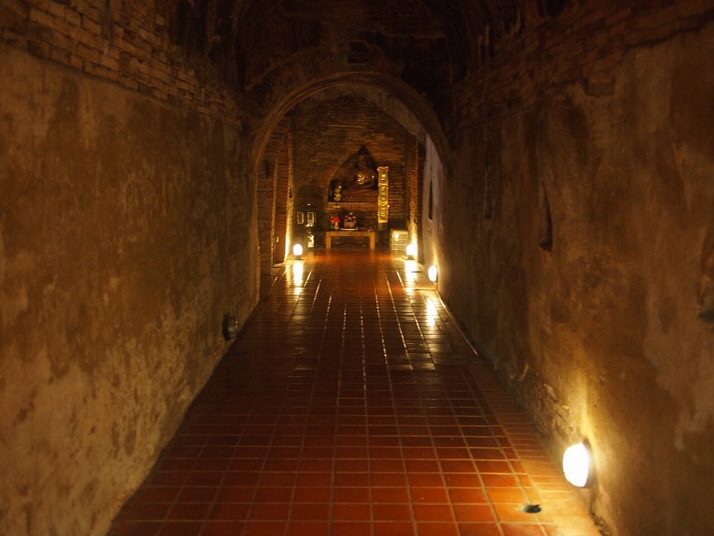 Wat Umong: The one in the forest with the tunnels

Sticking to the western side of the city, Wat Umong is in a quiet forest setting and boasts something unique – tunnels! Said to have been built to keep a deranged monk from wandering off, the tunnels were to provide solace and peace to aid the monk’s condition. That’s the official version, but it sounds to us like they were made to keep him locked up..
The wat is also home to a large, vocal family of hens and roosters who kept an eye on us as we wandered through the grounds. Also worth mentioning is the excellent Wattana Art Gallery which is nearby – down a side street on the left as you approach the entrance to the wat. 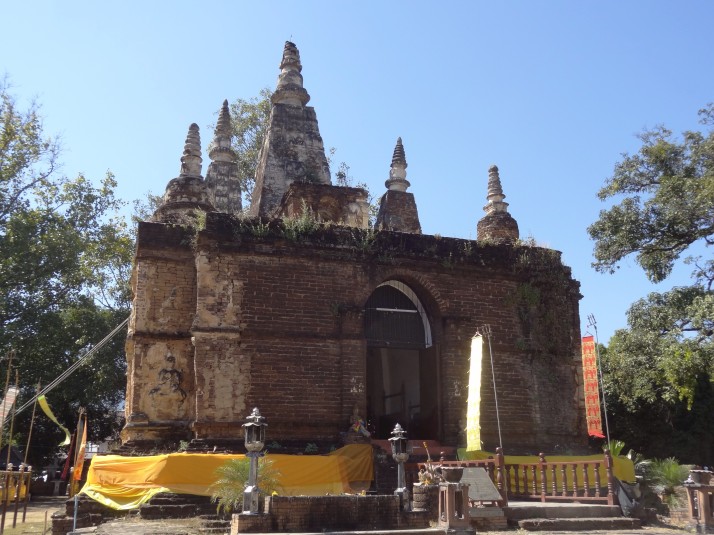 Wat Ched Yod: The one with the seven peaks

Wat Ched Yod is probably one of the least visited of the major temples in Chiang Mai. Ched Yod translates to “seven peaks” and refers to the seven slim spires which top a temple in the centre of this expansive complex. As well as the spires, the outside of the temple is covered in beautiful stucco and is still used as a temple of worship.
We also liked the giant Bothi tree behind the temple, it’s large old branches supported by green metal crutches, and its trunk surrounded by symbolic white wooden crutches. And the phonetic translation of its Animisa Chedi as “Animis Jedi” – the place “where the Buddha attained the divine eye after leaving his edit action state” – obviously a reference to The Force. 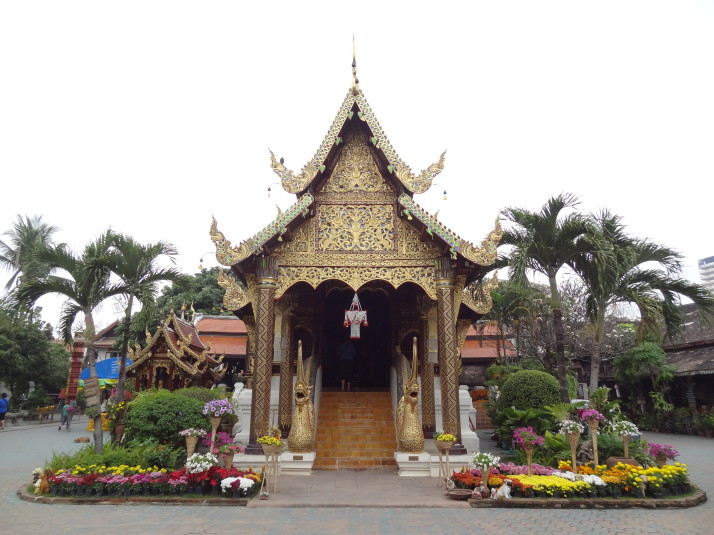 Wat Ket Karam: The one full of dogs and bric-a-brac

Wat Ket Karam is a delightfully small wat on the eastern side of Chiang Mai dedicated to the dog. Most (if not all?) wats are associated with animals from the zodiac, and while you can worship at any temple, it is considered particularly auspicious to do so at the wat of your birth animal, especially on your birthday. The main temple is narrow but long, and due to a conservation effort to save the wat’s buildings, it’s also home to a museum of locally donated artefacts. I use the term ‘museum’ in a very loose sense, as it’s more like the contents of a car-boot sale. Without the cars. Or the boots. 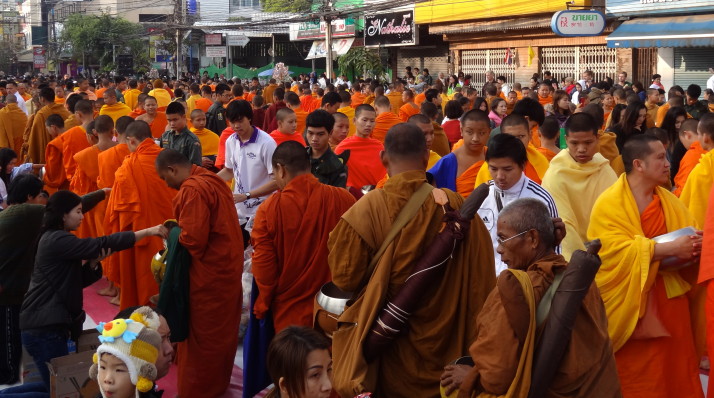 On the 28th of December, the main eastern artery of Chiang Mai is closed for the annual alms for 10,000 monks. We were there just before the 7:00am starting time and found a good vantage point to watch the local Thai population give alms. It was very well organised with 4 rows of monks walking slowly up and down the lower half of Chang Klan road, holding out their offering bowls for the givers to fill up.
It was at this point that I started to question the point of this exercise, as, once a monk’s bowl was full, he would turn to an inner track of young uniformed helpers that held up clear plastic bags whereupon the bowl was emptied and the monk advanced along the line. The clear bags didn’t follow the monks, so how are the offerings divvied up at the end? And then there were the offerings themselves – it was mostly ‘junk’ food; packets of instant noodles, bags of sweets, individual bags of rice – essentially the worst components of Monk Baskets. The efficiency of the operation was overshadowed by the inefficiency of the transfer of alms – boxes of instant noodles were gifted, one packet at a time to be deposited into clear bin bags, and the original packaging was thrown away.
I couldn’t help thinking that in scaling up this act of generosity, the essence or the spirit has somehow been lost to spectacle.