Still keen for a change from the multitude of ancient Greek and Roman theatres and religious sights of amazing cathedral and church after amazing cathedral and church, we were delighted to find Naples has a wealth of art museums. As if we needed another reminder that our two year trip is nearing two years and we’ll soon be home in England, the weather turned decidedly British so we headed for cover! 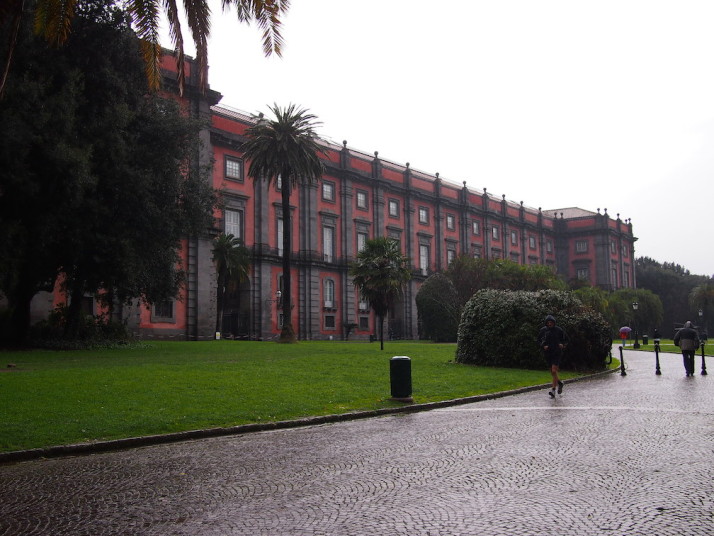 The Museo Nazionale di Capodimonte on a very grey, wet day. Fortunately the rain held off until we were safely inside

Located in the grand Palace of Capodimonte, the National Museum of the same name hosts special exhibitions as well as an extensive permanent collection displayed in exquisitely decorated rooms, which reminded us of the style, if not the scope, of the Hermitage in St Petersberg. 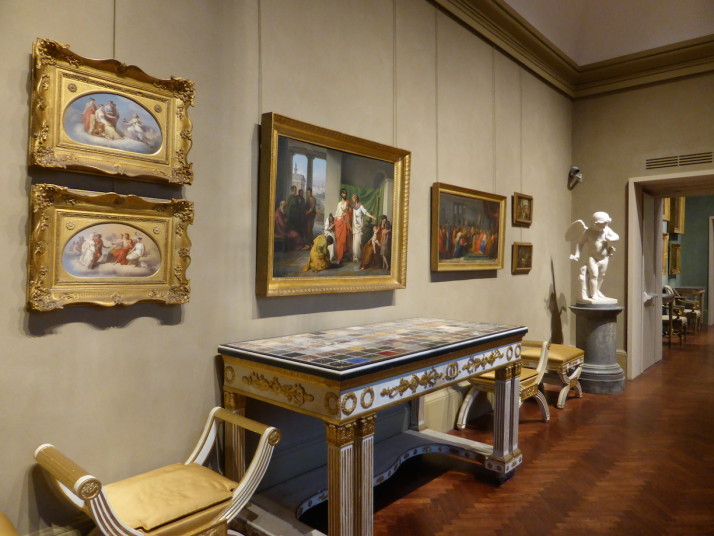 The Royal Apartments includes 18th century furniture, such as this table with numbered squares of different marble on the top, like a samples book for kitchen tops!

Started in 1738 by King Charles VII, then King of Naples and Sicily, initial plans for a hunting lodge were extended in favour of a larger Royal Palace to house his growing entourage and also somewhere to put the recently inherited Farnese Art Collection after the death of his mother, Elisabetta Farnese. We saw some of the large marble statues of the same Farnese Art Collection when we visited the the Archeological Museum. 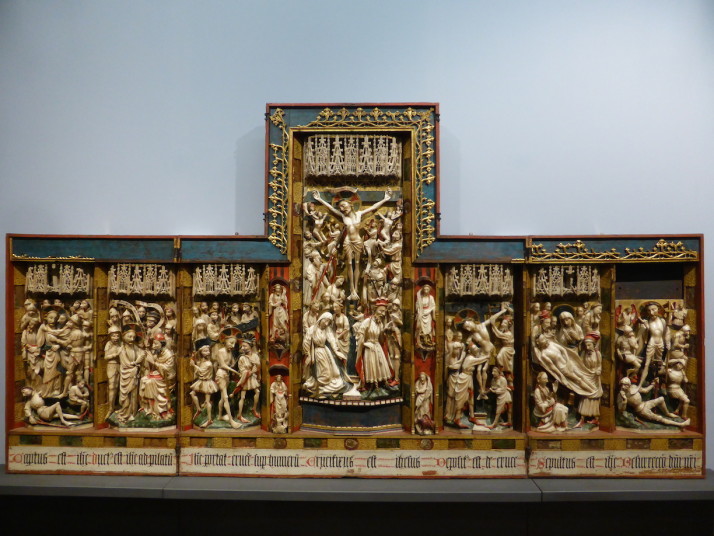 The National Collection takes up most of the palace, and comprises art that ranges from the 13th to the 18th centuries. Among the rooms dedicated to religious art this one stood out as it’s from England! “Triptych with scenes from the Passion”, 2nd half of the 15th century 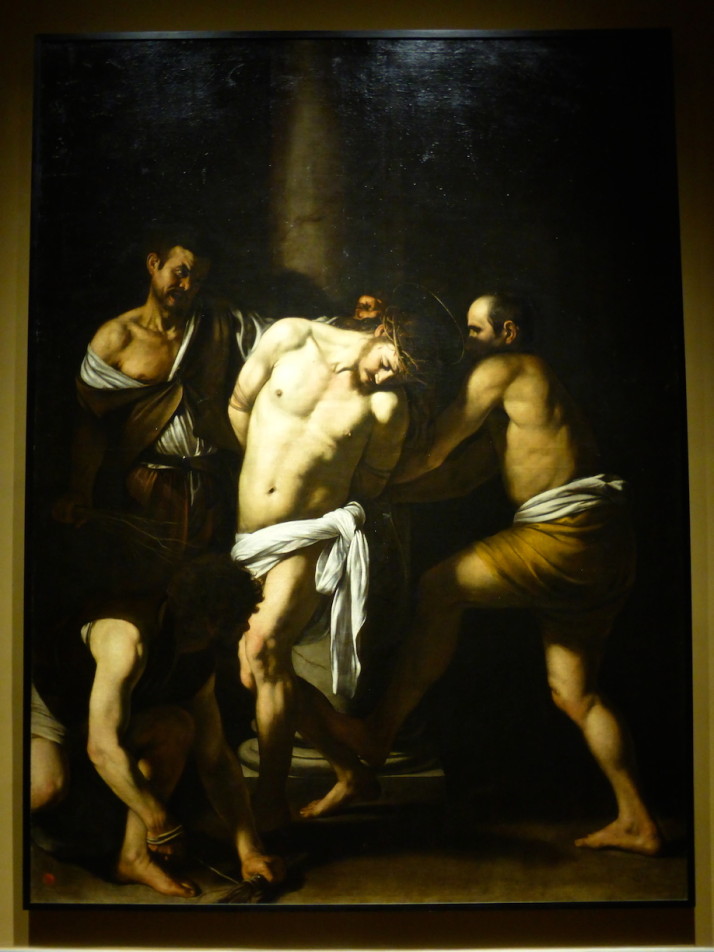 We continued our trail of Caravaggio from Malta with a highlight of the museum’s permanent collection – “The Flagellation of Christ” by Caravaggio, painted in Naples in 1607 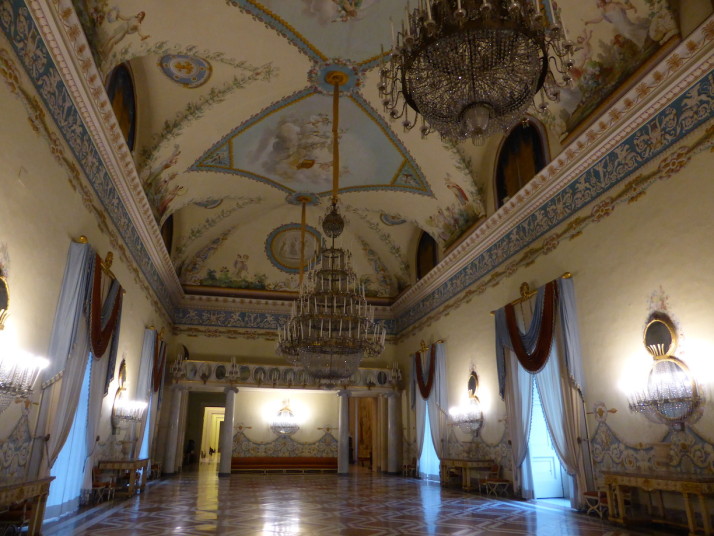 One of the many grand royal rooms gave us a break from painting and statue fatigue, this one is the ballroom and we thought it appropriate to waltz through it. Without music Julie admiring works of the permanent collection. We also enjoyed the huge collection of banquet porcelain and the 3 rooms of armour and weaponry 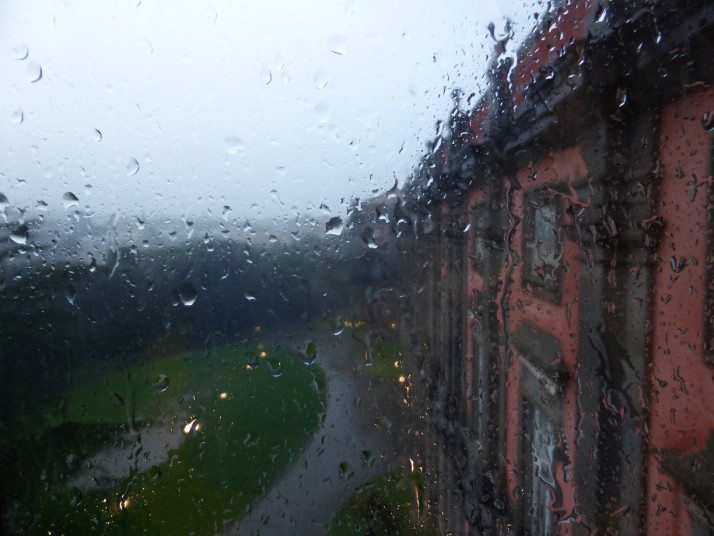 A good day to be inside.. we saw flashes of lightning and heard huge crashes of thunder during our visit. We waited in the cafe for a lighter spell before heading home! 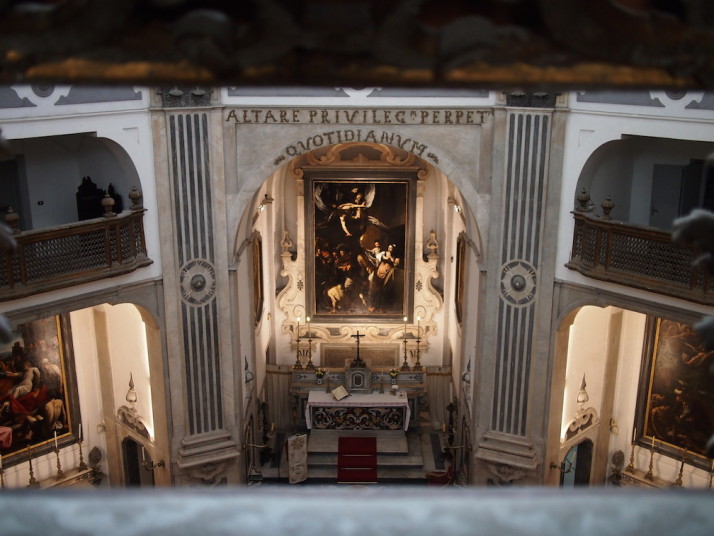 View of the Pio Monte della Misericordia church from the little choir on the first floor, with Caravaggio’s “The Seven Works of Mercy” in pride of place above the altar

The Pio Monte della Misericordia, loosely translated as the “Pious Mount of Mercy”, is a charitable brotherhood founded in August 1601 by seven young nobles, who met every Friday at the Hospital for Incurables and ministered to the sick. Through their own donations of time, money and encouragement, they built a reputation and with a little help established an institution and commissioned a small church. 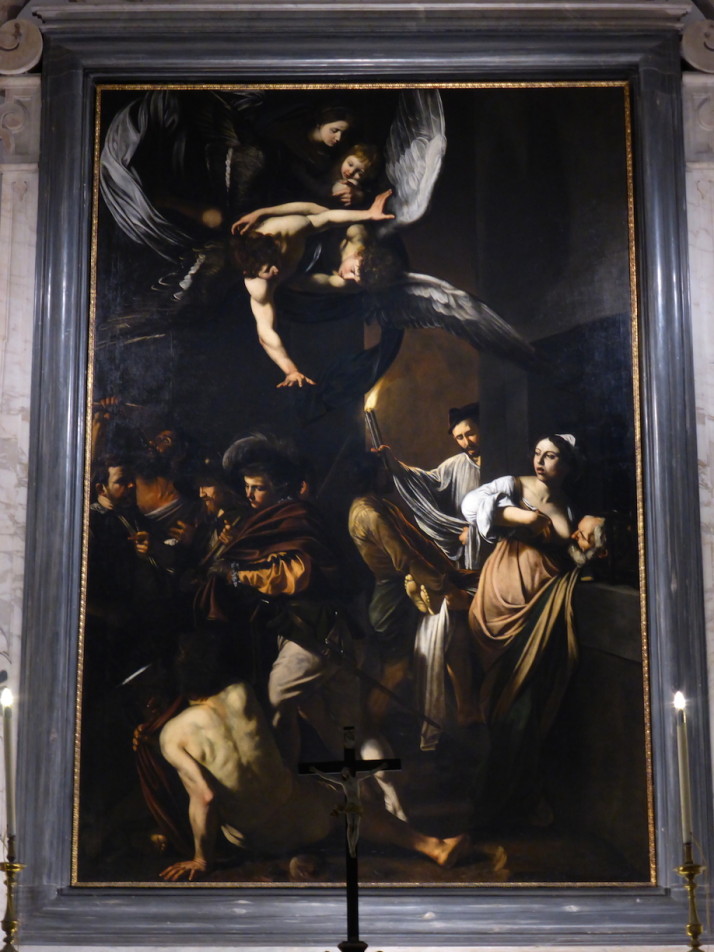 Close up of “The Seven Works of Mercy” by Caravaggio. He was originally commissioned to produce seven separate paintings, but presented a single painting depicting all 7 works instead. They are: Bury the dead; Visit the imprisoned, and feed the hungry; Shelter the homeless; Clothe the naked; Visit the sick; and Refresh the thirsty

Today the small circular church and attached museum is famous for the altarpiece that was commissioned for it entitled “The Seven Works of Mercy” by Caravaggio. We’d picked up Caravaggio’s trail in Malta where he’d fled after an altercation in Italy, and so we felt like we were retracing his steps as he returned to Italy through Sicily. 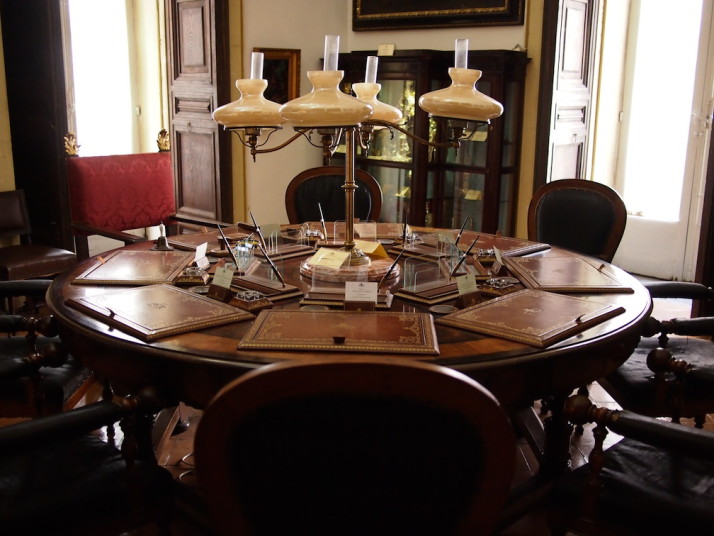 This is the table the brotherhood met at every week to discuss the activities of the association. Today it’s housed in the museum rooms surrounding the church

An interesting part of the museum’s collection is a room filled with an artists example’s of compositional elements such as depictions of saints in various postures. It hadn’t really occurred to us that when commissioning artworks the painter might have such a ‘catalogue’ to call upon to help the commissioner decide. The museum’s information also explained that the artist would often produce rough sketches of the overall composition before starting work on the final painting. The contents of Francesco de Mura’s studio were donated to the brotherhood, and included these compositional artworks used to help clients decide on elements of their commissioned paintings. The four smaller paintings of the same subject have clearly visible numbers painted in the bottom corners Behind a large but otherwise unimposing doorway in a Neapolitan back street is the delightful Chapel of Sansevero. Photo source: Museo Sansevero

Originally built in 1590 as a family chapel and later converted to a burial chapel, the Cappella Sansevero or Chapel of Sansevero was given its final elaborate decor by the 7th Prince of San Severo, Raimondo di Sangro who asked his ancestors not to alter it in his will.

Known as an inventor, soldier, writer, scientist, alchemist and freemason, Raimondo was a prolific experimenter and re-designed the family chapel adorning it with astounding works of art such as the sculptures of his mother and father that take pride of place either side of the alter. 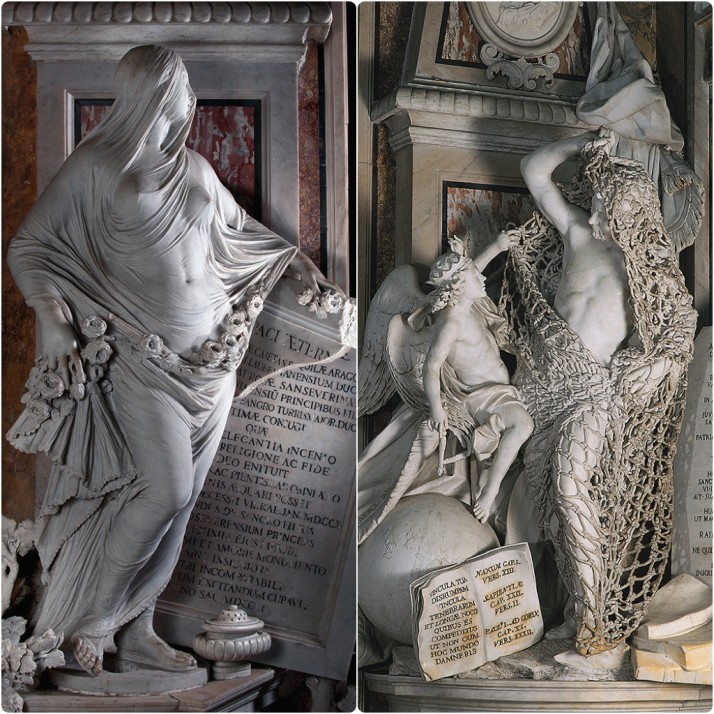 Raimondo di Sangro commissioned many works to embellish the family chapel, such as these figures which continue the theme of virtues but also represent his parents. Photo source: Museo Sansevero

However, the most famous piece he commissioned is by Giuseppe Sanmartino called The Veiled Christ. A masterpiece of marble sculpture that depicts the body of Christ under a fine veil.. The Veiled Christ by Giuseppe Sanmartino is a masterwork of sculpture. It’s not without controversy though, as Raimondo di Sangro had a reputation for trickery and not revealing the workings of his experiments. It is believed that the material or process used for The Veiled Christ is of his invention and it has an uncharacteristically high gloss sheen to it. He destroyed a lot of his records before he died so we will never know for sure. Regardless, it is beautiful to behold. Photo source: Museo Sansevero

Besides the amazing works of sculpture, another marble marvel caught our imagination. The original floor of the chapel consisted of a repeating geometric pattern with a dividing white marble line that was apparently unbroken. Said to represent the path to enlightenment, it was sadly broken beyond repair by an earthquake and only fragments of the floor remain. 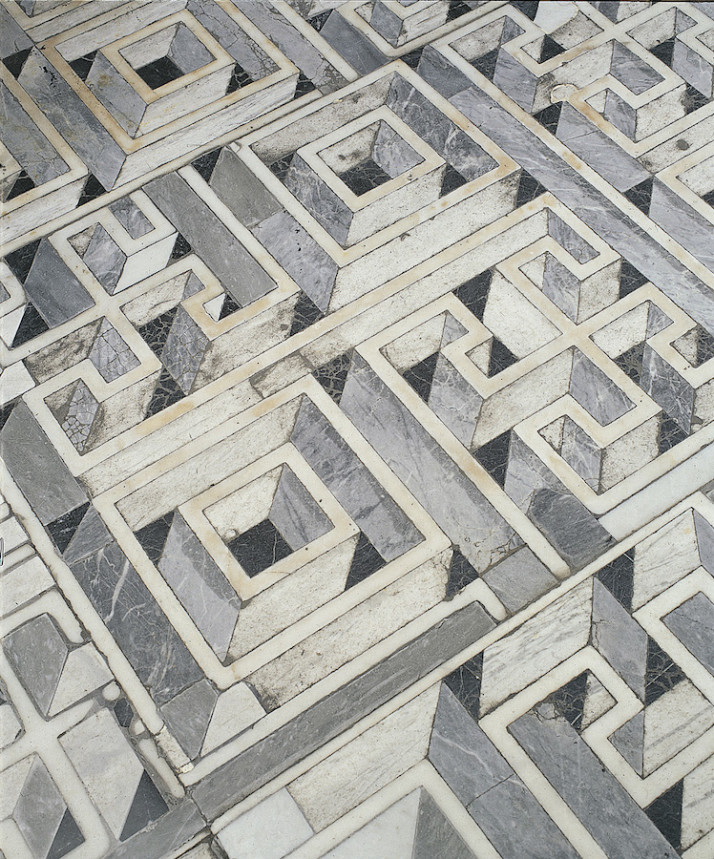 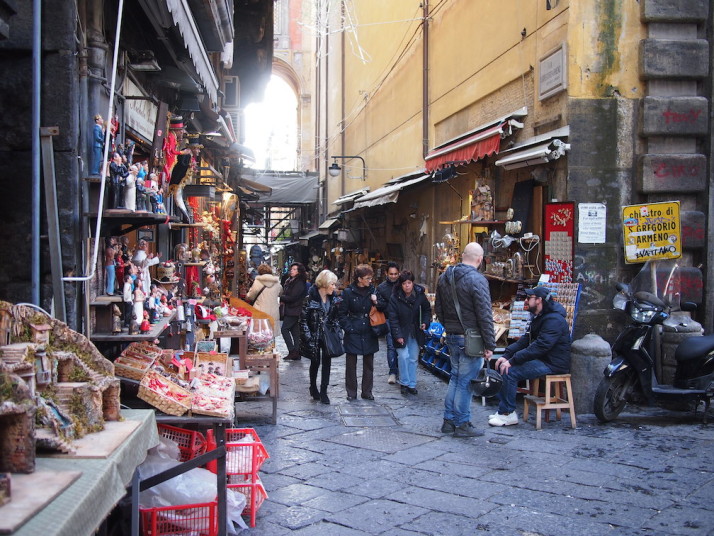 The narrow, busy Via San Gregorio Armeno, otherwise known as Nativity Street because almost every shopfront is a model factory

Not a museum as such, the street near Cappella Sansevero has long been home to workshops that make models primarily for elaborate nativity scenes. The street has a long history of modelling, as it was home to a statue of Ceres in the Classic era which was worshipped by leaving small clay figures that were produced in the vicinity. Today, most of the models are still made of clay and it was a nice change from the traditional arts of sculptures and paintings to see a sort of living art on display. We liked the variation of the model subjects as they weren’t just limited to the Christian nativity. Clockwise from top-left: Joseph; Camel-mounted wise man; box of un-painted figures and body parts; One model maker had a stand of celebrities, here are our very own Duke and Duchess of Cambridge (let’s just ignore the hair colour of baby George that points towards the father being Prince Harry rather than Prince William..) 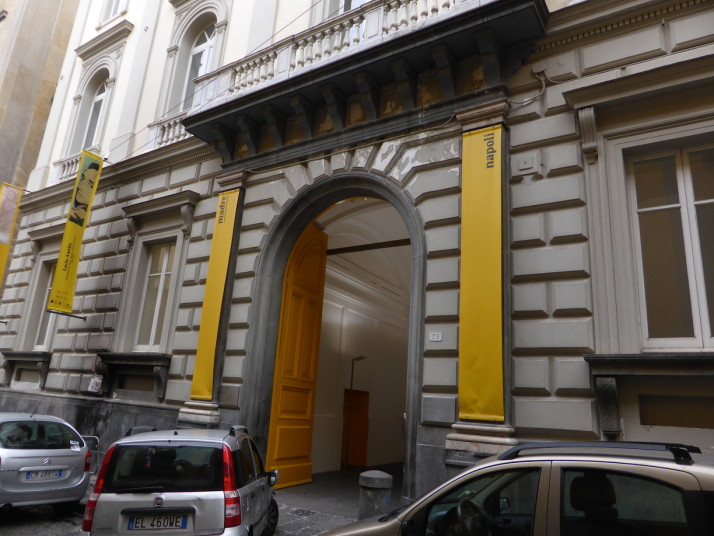 We’ve visited quite a few modern art museums on our travels thus far, and we thought the Museo MADRE would be a nice change from the wonderful old architecture and baroque masterpieces. That is if we could find it! Our tourist map showed it on the main Via Foria and we saw the banners but couldn’t find the entrance anywhere nearby, so we stopped to ask someone who read the address on said banners and gestured that it was the parallel street south of Via Foria! The first piece we liked was ‘Line of Chance’ by Richard Long, a thick border line painted near the ceiling then covered in mud which is left splattered down the walls. We liked that the space had been used by schoolchildren and there were a couple of small hand prints on the walls near the sinks One of my favourites was this installation of skulls, lights and moving mirrors called ‘Spirits’ by Rebecca Horn. Imagine three sides of the room with these at varying eye-height, the light and partial reflections slowly moving. Wonderfully weird! Photo source: Museo MADRE Another piece that stood out was this one called ‘Dark Brother’ by Anish Kapoor. It’s an optical illusion that appears to be both a black hole in the ground, and a painted black rectangle. We tried looking at it from different angles behind the glass barrier but we couldn’t discern which it was. The museum staff member took a bit of delight watching us trying to work it out, and it reminded us of James Turrell’s work on Naoshima, Japan. Photo source: Museo MADRE The sumptuous central foyer of the Gallerie d’Italia, Palazzo Zevallos Stigliano. The art museum is on the second floor to the right

The Palazzo Zevallos Stigliano is 1 of 3 Gallerie d’Italia operated by the Cultural Project of the banking group Intesa Sanpaolo, the 2nd largest banking group in Italy. The beautiful baroque palace on via Toledo, the main shopping high street in Naples, is home to a small but important art collection that includes another of Caravaggio’s works.. The Martyrdom of Saint Ursula by Caravaggio, thought to be the last picture he painted before he died en-route to Rome

Thought to be his last work, The Martyrdom of Saint Ursula depicts the moment Ursula, having refused the Hun king’s marriage request is dispatched by an arrow from his bow. We really liked the small, intimate and lavishly decorated gallery rooms that didn’t leave us overwhelmed

Other highlights of this small but well-laid out museum where the Judith beheads Holophernes by Louis Finson, one of the first flemish Caravaggisti (to paint in the style of Caravaggio), and a small exhibition of Vincenzo Gemito whose work we saw in a special exhibition at the Capodimonte – the first museum we visited in Naples! The exhibit of Vincenzo Gemito was one of our favourites, even though we’d seen a lot of his work in the Capodimonte earlier in our stay