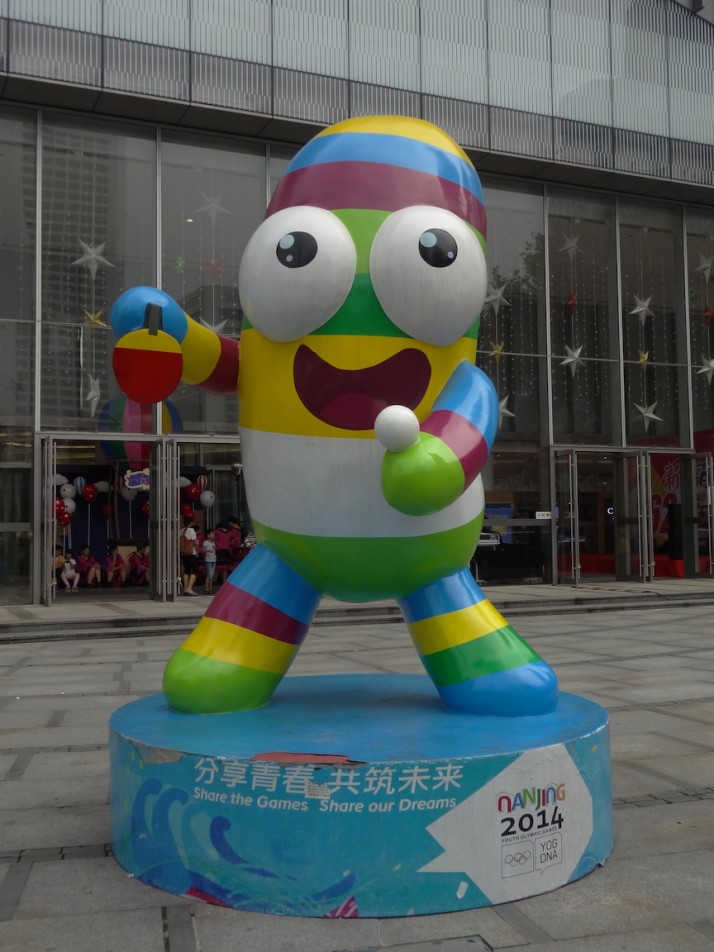 Nanjing first became the capital of China in 229 CE, indeed the ‘jing‘ (京) of Nanjing (南京) literally means “capital of a country” and ‘nan‘ (南) means “south” so if I tell you “bei” (北) means “north” you now know China has two capitals – in name at least!

For nearly 2000 years the capital moved back and forth between north and south, but it was Nanjing that witnessed the end of Chinese imperial rule and the troubled start of the current republican era with the birth of the Republic of China in January 1912, and then the People’s Republic of China in 1949, when the capital finally settled in Beijing.

Nanjing is a city rich in history, and the whole place is like a giant museum. Here begins the tour of the sights we visited, which I make no apologies for sounding like a chapter of a Chinese History textbook. It’s required reading people, and there will be a test at the end.. 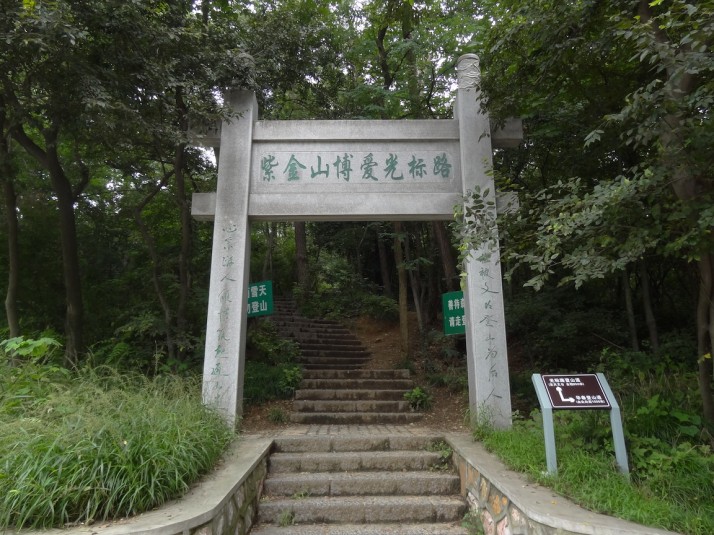 Nanjing’s Purple Mountain, a mass of hiking trails, entertainment and the tombs of both the Ming dynasty emperor and the first president and founding father of the Republic of China

The Purple Mountain, so called because its peaks are often enveloped in golden-purple clouds at dawn and dusk, sits to the east of the city and is a popular destination for locals and tourists alike. 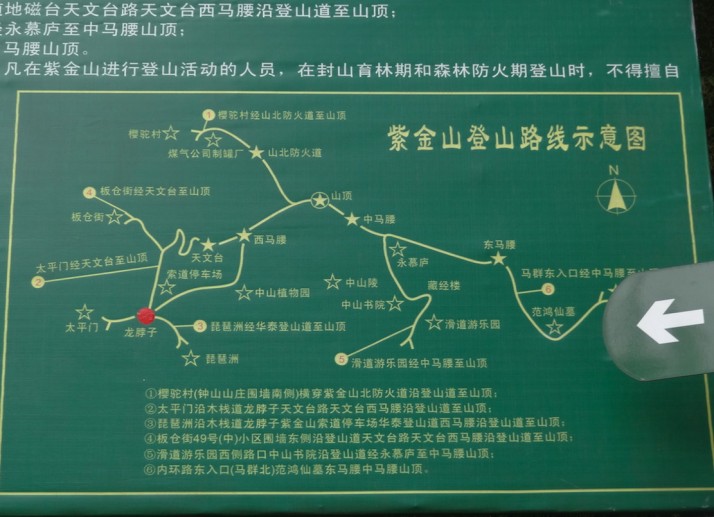 Map of the main Purple Mountain hiking trails at the bottom. None of the named points on this map corresponded with the signposts further up the trail we followed. None

We found the Purple Mountain easy to get to but difficult to navigate once we got there. With the exception of the mausoleums and parks to the south, the signage on the mountain trails are only in Chinese. I hadn’t found a good map before we went, and I regretted not having made some translation notes when we tried asking for directions at one of the many intersections. My best charades for “mountain top” elicited only blank looks and a vague pointing in the direction we’d just ascended, so we decided to call an early end to our hike and head to Dr Sun Yat-sen’s Mausoleum. 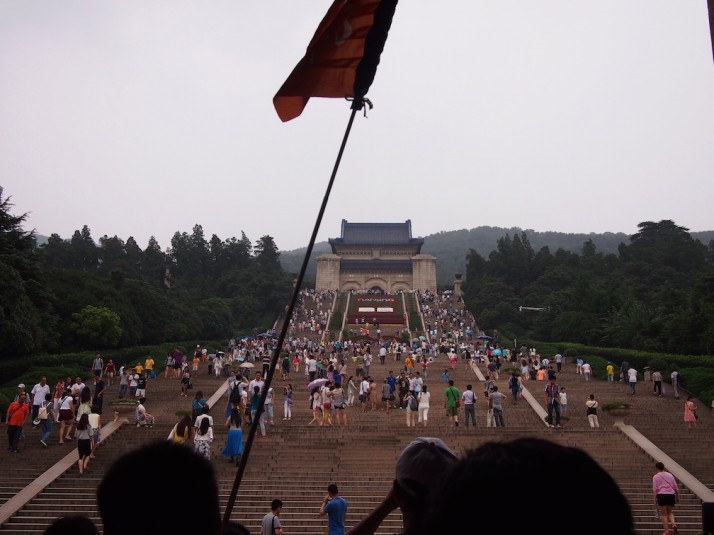 Designed and completed within 4 years of his death in 1925, his mountainside mausoleum is magnificent. It reminded us of the imperial tombs of Hue in Vietnam, but while those were for emperors, Dr Sun Yat-sen was a revolutionary, a key figure in overthrowing the last emperor of the imperialist Qing dynasty, and was appointed the first Provisional President of the Republic of China in 1912. 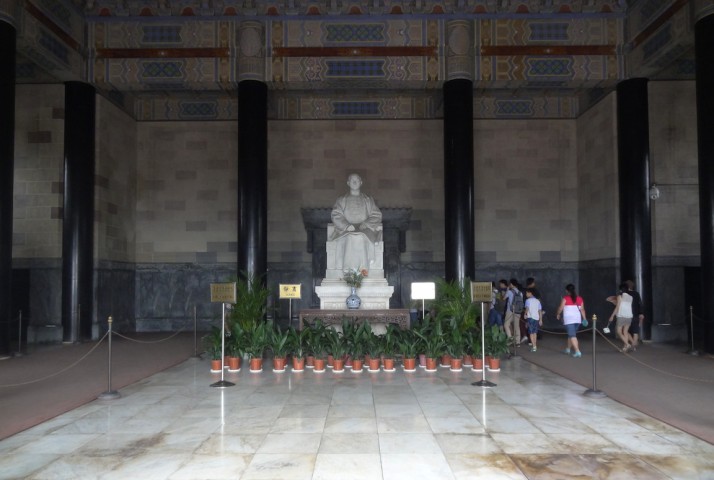 The Italian marble statue of Dr Sun Yat-sen sits in the Sacrificial Hall at the top of the mountainside stairway. His sarcophagus lies in a hall behind the statue

It was well worth the climb to the hall at the top, and we were a little disappointed that we weren’t able to see his sarcophagus which rests in a bell-shaped room behind his statue. 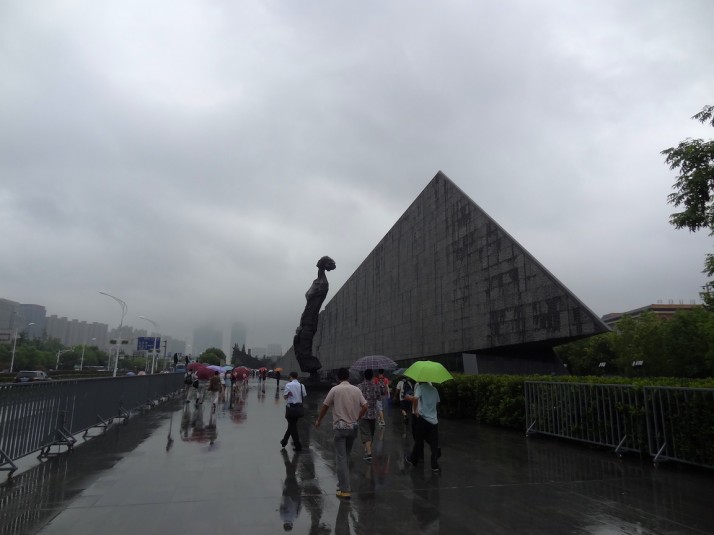 Entrance to the Nanjing Massacre Memorial Hall. A gloomy day foreshadowed our lesson in the worst of human behaviour

The period in Chinese history between the founding of the Republic of China (1912) and the People’s Republic of China (1949) was a very dark time for China as the Japanese Army, which had been poking at China with “incidents” here and there since the end of the first Sino-Japanese War of 1894–95, disobeyed its own government and started the Second Sino-Japanese war of 1937-45. Japan quickly escalated and broadened the conflict by attacking the USA, bringing it and its allies from World War II to the Pacific War, which ended with the utter devastation of Hiroshima and Nagasaki.

Once the Japanese imperial government got behind and reinforced the early successes of its bloodthirsty runaway army, they took Shanghai and then quickly took the capital Nanjing. What the conquering Japanese did in Nanjing explains a lot of the ill-feeling that still exists in China toward Japan to this day, and the Nanjing Massacre Memorial Hall details what history recalls as the “Rape of Nanjing.” 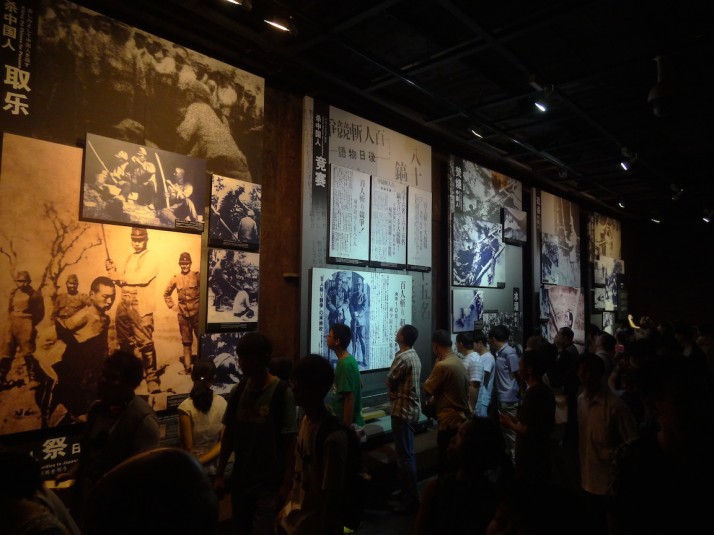 One of the many graphic, large exhibition halls inside the museum

We found it to be a very well thought out museum. The exhibits are varied, the English captions and explanations are excellent and for the most part it’s neutrally factual in its description of the atrocities. It is, however, harrowingly unflinching. The photos of the killing fields and beheaded Chinese were difficult to see, especially one of a young boy caught with a monetary note in his pocket, tied to a lamppost and photographed just before he was executed.

Equally harrowing were the recently recorded first-hand accounts from the Japanese soldiers themselves talking about their actions during the war – one said of the gang-rape that every soldier took part, and those that denied it were liars. 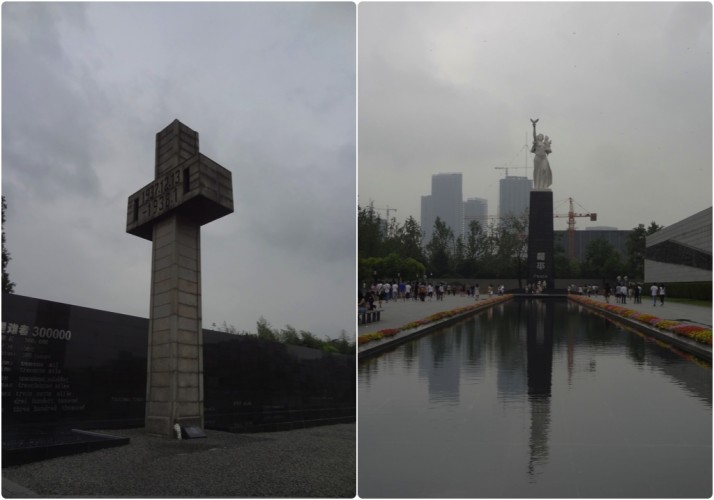 Memorials to the victims, and the Peace Statue

The Chinese government estimates that approximately 300,000 civilians and unarmed Chinese soldiers were brutally slaughtered in the six weeks following the city’s capture. 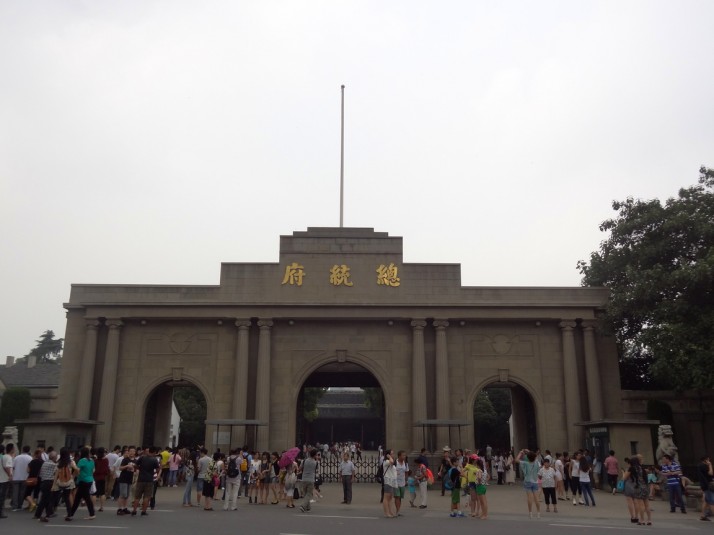 Main gate of the Presidential Palace in Nanjing

The Presidential Palace site has been the seat of the southern Chinese power since the first emperor of the Ming dynasty (1368–1644). While the buildings have been destroyed and rebuilt in the style of the times over the years, it was here that the birth of the Republic of China took place and Dr Sun Yat-sen was elected Provisional President, albeit for a few short months before he resigned and power was transferred to Beijing. In 1927, nearly 15 years later, Nanjing and the Palace once again became the capital, this time of the People’s Republic of China led by Premier Chiang Kai-shek, until they fled the Second Sino-Japanese War when the Japanese invaded and took the city in 1937. 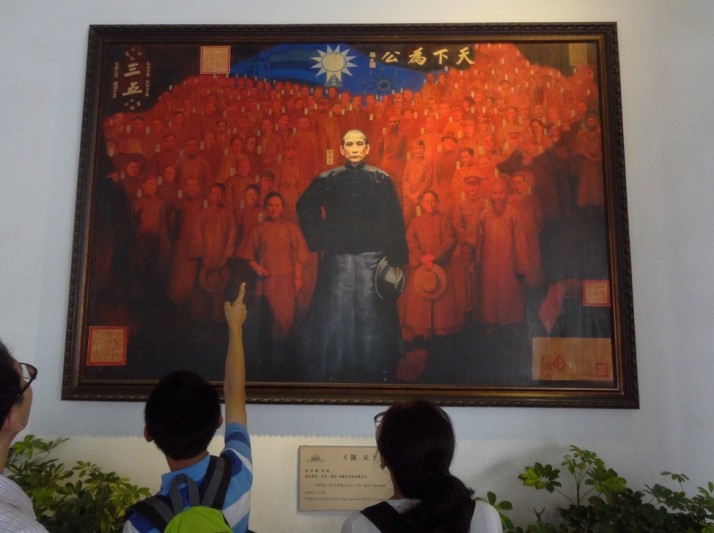 After the Japanese surrender at the end of World War II, and the subsequent Civil War in mainland China, the capital was finally wrested from Nanjing when Mao Zedong proclaimed the People’s Republic of China (PRC) from atop Tiananmen in Beijing.

Today, the Presidential Palace is a museum to this turbulent and important period of Chinese history, but while it has some interesting exhibits, such as the Kuomintang (KMT) Party flag and the encrusted skull of a tiger, it is sadly lacking in English translations and suggested walking routes. As one TripAdvisor reviewer put it, you’d better have done your homework before you visit! 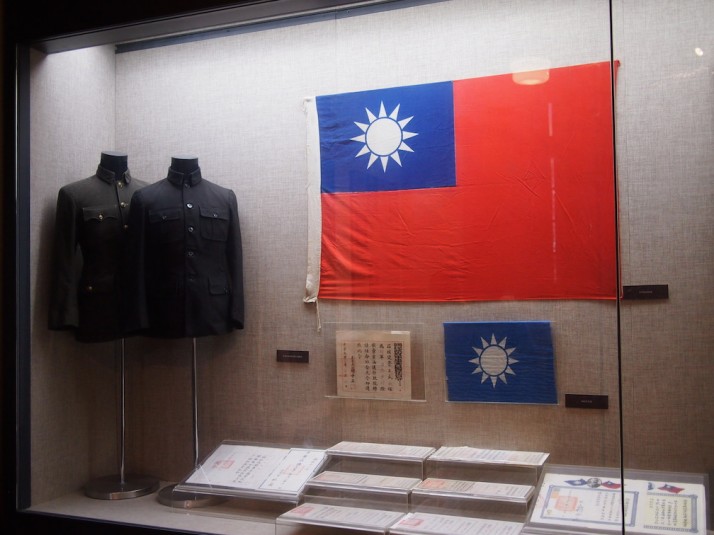 The flag and uniform of the Kuomintang (KMT), the first party of the newly created Republic of China and currently the ruling party in Taiwan

The administration buildings make up the central strip of the grounds, and are flanked by lovely peaceful gardens to the west and more traditional Chinese buildings to the east – the latter also contains an underground bunker and both contain a pond complete with stone boat! 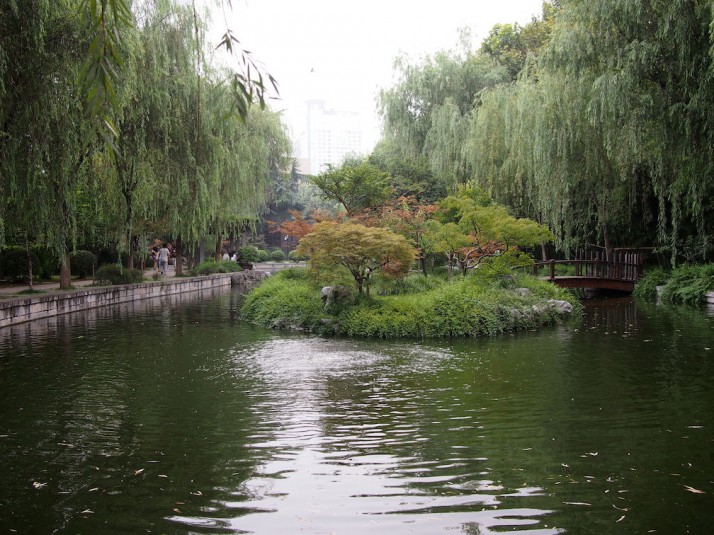 The lovely gardens of the Presidential Palace.

The Stone Boats of the Presidential Palace. The larger one on the left is in the west gardens

We enjoyed visiting the Presidential Palace, and while the significance of a lot of the items on show was lost on us because they only had Chinese captions, and most of the government offices looked similar with their rows upon rows of desks (with qwerty typewriters!), it was great to see where so much important history had taken place and we loved walking through the gardens.