We have now reached the one year anniversary of our two year trip! Here’s our summary of the last three months. 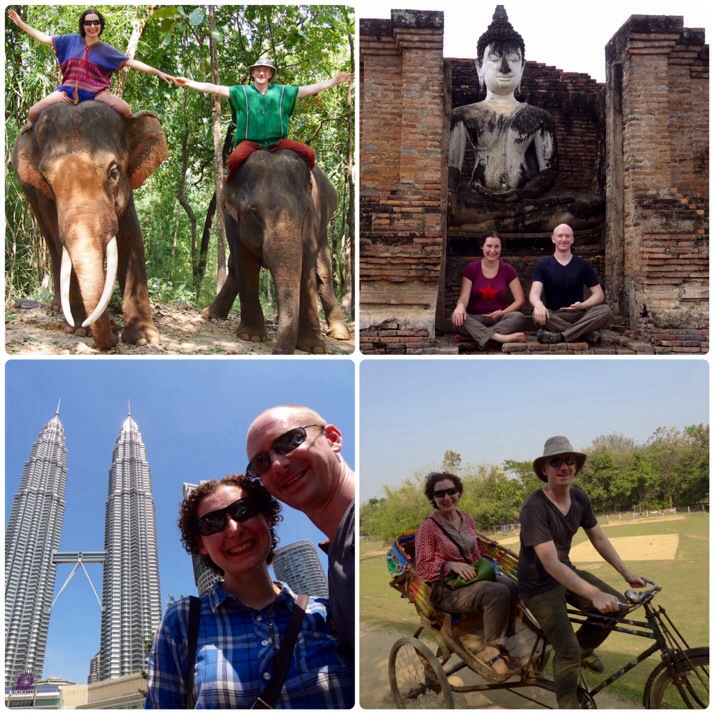 Meeting elephants in Chiang Mai, pretending to be Buddhas at Sukhothai Historical Park in Thailand, the iconic Petronas Towers in Kuala Lumpur, we commandeered a rickshaw in Birisiri in northern Bangladesh

Thailand, Malaysia, Bangladesh (total visited to date on this trip = 12)

Easily within budget, our average daily spend over the three months has been £50.59. Our daily spend to date since we left home has been £62.40.

Bangladesh has been an incredibly cheap place to travel with March’s spend bumped up only by flights and our 3 day tour to the Sundarbans. Our record day was just £9.32 including a 3 hour bus journey, an ensuite room, food for the day and a haircut for Andrew! 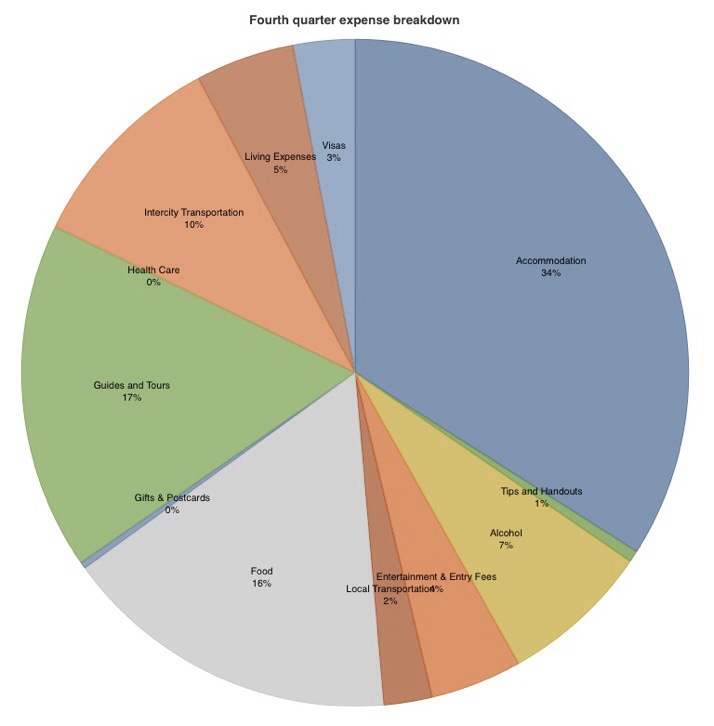 Julie – That we would need to take a break from travelling.  It sounds crazy that anyone would need a holiday from a holiday but by November we were pretty burnt out and exhausted from almost constant sightseeing and movement (albeit at a reasonably relaxed pace) and we were craving a place where we could slow down, unpack and catch up on admin (blogging, photo uploads, Skype with family back home).  I’m pleased to report that after two months of rest we were again raring to go!

Andrew – How much we rely on the internet. For something that’s only been around for about 25 years to have dramatically altered the way we research and plan our travel is astounding to me. Perhaps it’s because we feel more comfortable about a place or a journey if we’ve got an idea of what to expect, but going from the high-speed wifi everywhere connected of Thailand and Malaysia to the no-speed wifi rarely-where of Bangladesh was both frustrating and liberating. I think it’s definitely more of an adventure to say “we’ll get a bus from here to there” and see what happens, than “we’ll get bus XYZ that departs every hour from ABC station, takes 3½ hours and arrives at DEF station, 1km to the west of the centre of town.” The good news is that even with access to the internet we can still choose to be a little more adventurous.

Taking tap water for granted. We boiled water in Thailand, we were encouraged to drink water from the cooler in Malaysia, and in Bangladesh – a country that by one estimate we heard ¼ is covered in water – it was hot and we drank a lot of bottled water. There were a few bouts of the Bengali Bowels after we forgot now and then, but most places we stayed included a large bottle of water with the room rate.

Julie – The temples of Puthia in north-western Bangladesh really blew me away with their abundant carvings but the day I really remember is the day that we were elephant owners in Thailand.

Andrew – The flora and fauna of the Sundarbans is a very close second, but for me it’s the modern splendour of the Wat Rong Khun or White Temple in Chiang Rai. It’s a fairytale palace of decadent detail that I hope I’m still alive to see completed in 2070 – I’ll be into my 90s by then!

Julie – On the train ride from Rajshahi to Joypurhat in western Bangladesh our window was missing the bolt that would hold it open. We fashioned a bit of a wedge from some paper which wasn’t ideal but better than nothing. The two Bangladeshi ladies sitting opposite noticed our struggles and (unprompted by us) mentioned the problem to the ticket inspector when he came round. A couple of minutes later, a uniformed porter appeared, grudgingly fiddled with the window for a few seconds before slamming it shut and then unbolted and shut the ladies’ window as well! The older of the ladies remonstrated with him but he grumpily shrugged and walked off. We caught their eye and all of us burst out laughing which broke the ice and we spent the rest of the journey having a very interesting conversation with them (after we’d re-wedged our window open of course!).

Andrew – Bearing in mind that most English conversations we had in Bangladesh consisted of “What’s your country?”, “How are you?”, with the rare and more advanced venturing a “Where [do you plan to] visit [in] Bangladesh?”, it was in answering this last question that after reeling off a list that didn’t include Cox’s Bazaar (the longest beach in the world, and the proudest place in every Bangladeshi’s heart) that my inquisitor responded in true American sit-com style with a loud “No Cox’s Bazaar? Seriously?!“

That would be Hasan, an English literature student we met at the Pink Palace on our first day in Bangladesh. As a precursor to the kindness we were to receive across the country, especially from students, Hasan took us on an impromptu tour of the riverside area of Dhaka into places and businesses we wouldn’t have found without his help – a school with amazing old buildings, a sign-painters, a cinema theatre (just to take a quick look – without paying!), and the markets to name a few. We enjoyed his company so we hooked up with him again on our last day in Bangladesh for a day trip to Sonargaon. 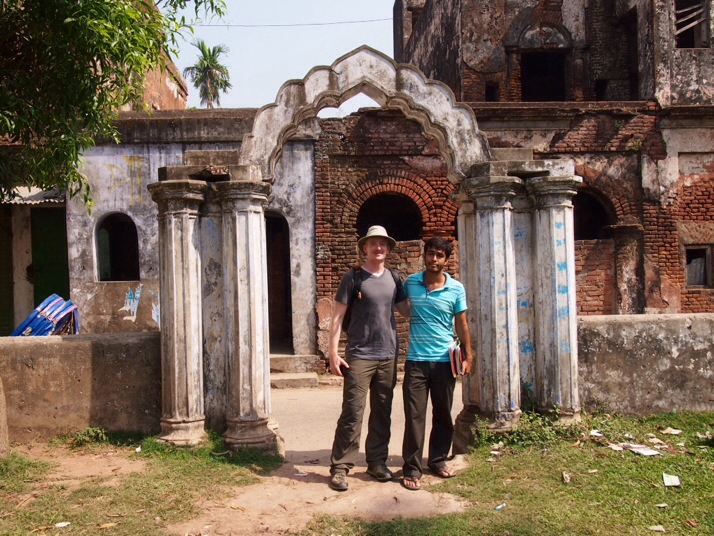 Andrew with Hasan at Sonargaon on our last day in Bangladesh

Navigating baksheesh in Bangladesh. Baksheesh, for those who don’t know, is kind of like a tip or reward for good service, a higher tip to ensure that repeated service remains good, or a sort of Robin Hood payment that the more well-off are to feel pleased to be given the opportunity to give, and in some cases, an out and out bribe. Once we’d worked out if the situation called for baksheesh, we then hit the minefield of having to work out how much to give. There were a few uneasy experiences but they were very short-lived as we reasoned, being tourists it’s likely we’d been a little overcharged already!