Before we arrived I wasn’t intending to do a summary of the food in Korea as I’ve done for Japan, Bangladesh, Thailand and the Baltics, but within days of arriving I knew that I wanted to write about it. If anything, I think that I’ve enjoyed Korean food even more than the food in Japan, although I think Andrew would disagree with me. It is full of strong and deeply satisfying flavours with lots of soups and stews, just the kind of food that I like to cook. Rather than do a full summary of what the food is like in Korea I thought that for a change I would just write about the stand out dishes.

I love that as soon as you arrive in a Korean restaurant, sometimes before you’ve even picked up a menu, several small dishes of mostly pickled vegetables are put in the middle of the table. I’d say we got an average of 6 dishes with each meal, there’s no cover charge for them and they’re usually refillable if you ask nicely. 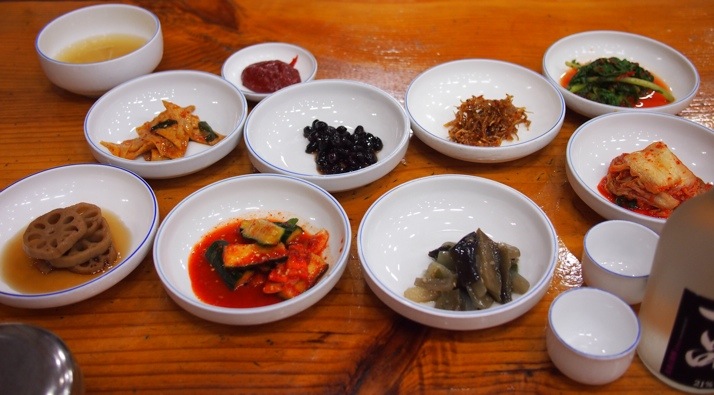 These were one of the first things we tried after arriving in Busan and for the remainder of our time in the city they were an almost daily treat. A hotteok is a small round bun which has had a spoonful of brown sugar secreted in the dough before being fried in butter on both sides. It is then snipped open halfway and filled with a mixture of toasted peanuts, sunflower, pumpkin and sesame seeds. The stalls in the BIFF square were so busy they had queues, but the stallholders had a very efficient production line system and turnover was fast. 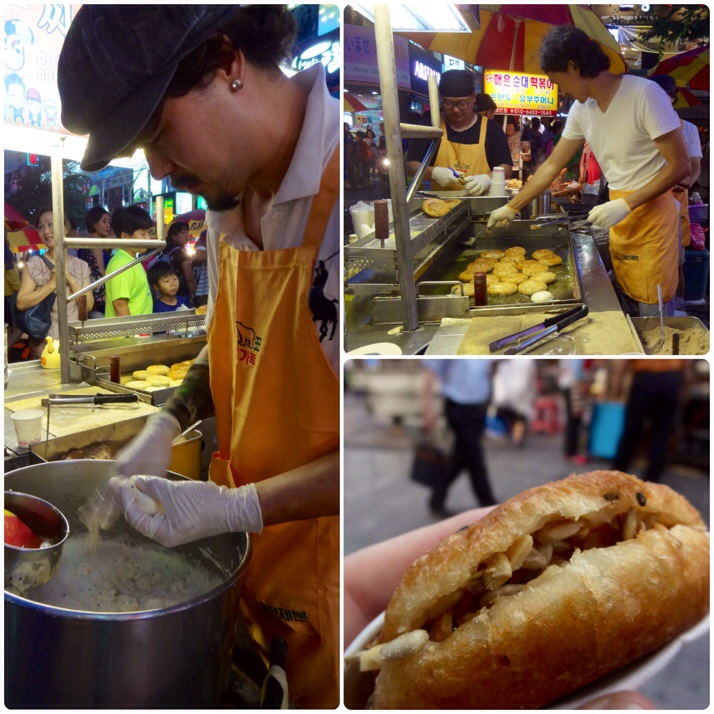 Hotteok (clockwise from left): batter being filled with sugar and formed; on the griddle; piping hot and ready to devour – yum!

How can you not love a food with a name like that?! In Korean it is Haejangguk and it consists of a peppery beef broth with hunks of meat, greens and a side of rice. There are slight regional variations, one we had in Andong contained cubes of ox blood, and in Busan the meat was on the bone. The soup is rich and warming and I think it would cure just about any malaise, not just a hangover. 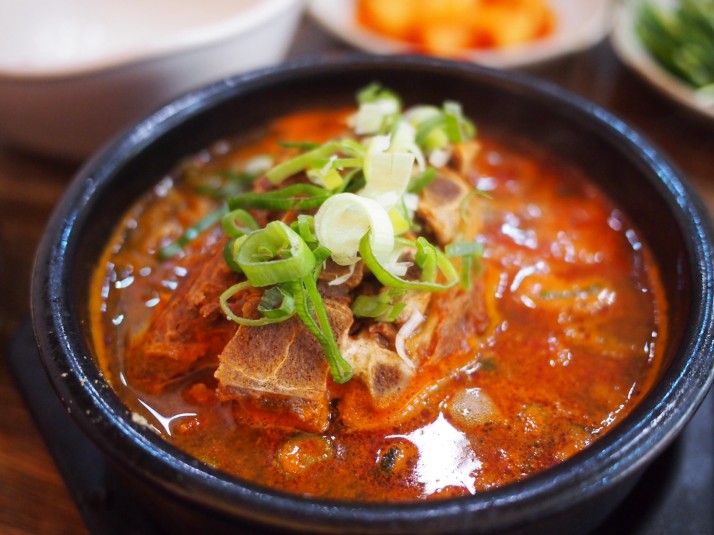 Barbecue restaurants are very common in Korea and they’re a lot of fun. Every table has its own barbecue, sometimes gas powered or sometimes a dish of hot charcoal is brought from the fire pit to the table. Once you’ve ordered the meat, usually either beef or pork, it is served raw and you cook it yourself. We found the array of side dishes to be even more impressive than usual in the barbecue restaurants and unaccountably often included a bowl of raw garlic cloves. I’m not sure what you’re supposed to do with them, but I liked the smokiness of them once grilled, and eating lots of garlic is supposed to keep the mosquitoes off which is an added side benefit if it works!

Gimbap is my new favourite packed lunch. It’s a sheet of seaweed covered with a layer of cooked rice and a line of fillings before being rolled and sliced. They’re like a fat version of a Japanese maki roll. Fillings typically include cucumber, pickled radish, carrot, and some protein, for example ham or tuna or omelette. I like the crunch of the vegetables with the flavour from the ‘meat’ and the fillingness of the rice. We’ve been plotting an English inspired version to make when we get home, the ‘Ploughman’s gimbap’ with cheddar cheese, ham, chutney and pickled onions is the front runner! 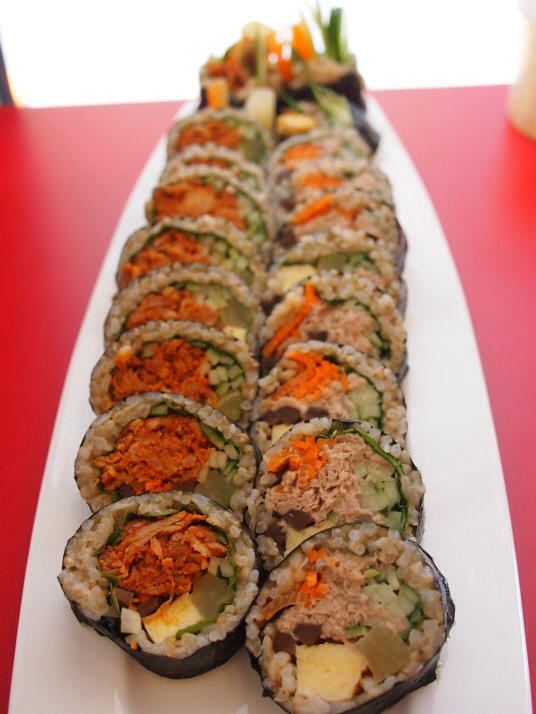 Very spicy pork gimbap on the left and tuna mayo on the right, at Robot Gimbap in Seoul

I’ve got to confess that the English translation of this dish’s name doesn’t sound too appealing but it is really good. The Korean name is Sundubu Jjigae and it is a spicy stew containing dollops of tofu with a custardy consistency along with vegetables and meat or seafood. Just before serving, a raw egg is dropped into the bubbling pot – in one restaurant, the egg was served on the side for us to break into the stew ourselves! The stew is served with a bowl of rice, dried seaweed flakes and the usual array of pickled vegetable side dishes to mix together. 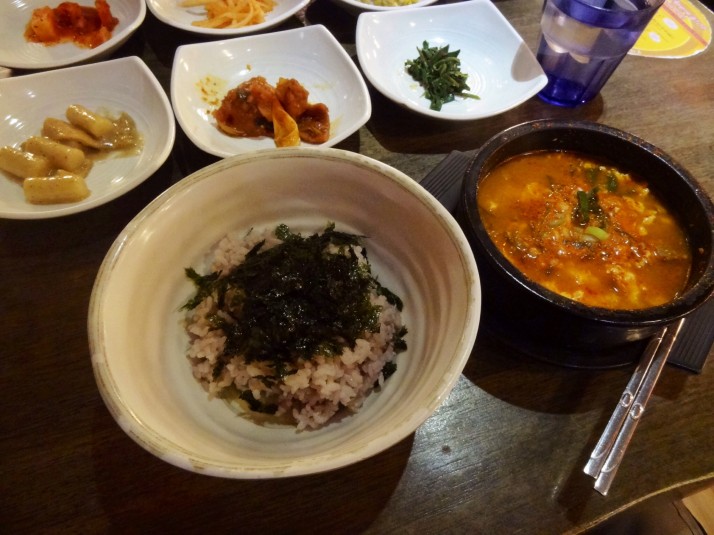 Soft tofu stew with rice, seaweed and an array of pickles

Whatever you do, don’t get it confused with soondae-gu which is a soup made from pig’s intestines, obviously we would never make such a rookie error…would we?

Bibimbap literally means “mixed rice” and a version of it appears on nearly every restaurant’s menu. It consists of rice, vegetables, meat, chilli paste and sometimes a raw or fried egg which is then all mixed together. It was usually a pretty safe option to order when we weren’t sure what anything else was – its name is easy to spot amongst all the Korean due to the repeating characters 비빔밥. 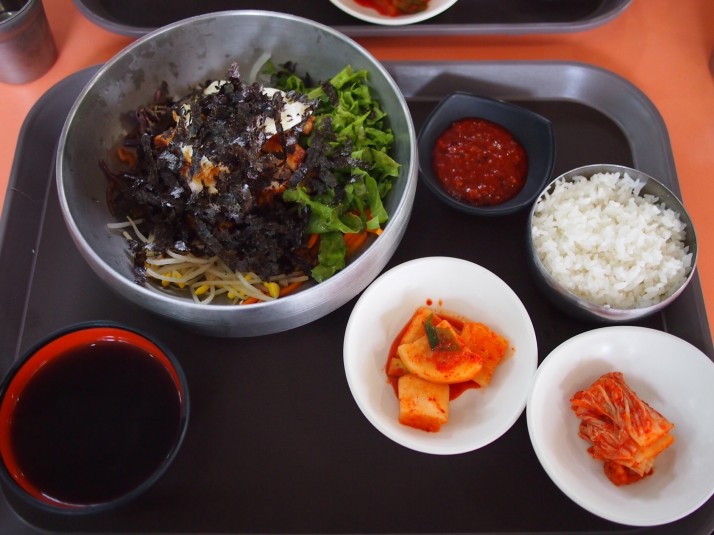 Chicken ginseng soup, or samgyetang, was something we heard about right at the start of our stay but it was just a couple of days before we left the country that we eventually got to try it. The flavour was reminiscent of a creamy chicken soup but very delicately flavoured with a variety of whole spices most notably ginseng. The chicken was very tender and stuffed with rice before being cooked so it was a filling dish as well as being a change from the highly spicy foods. 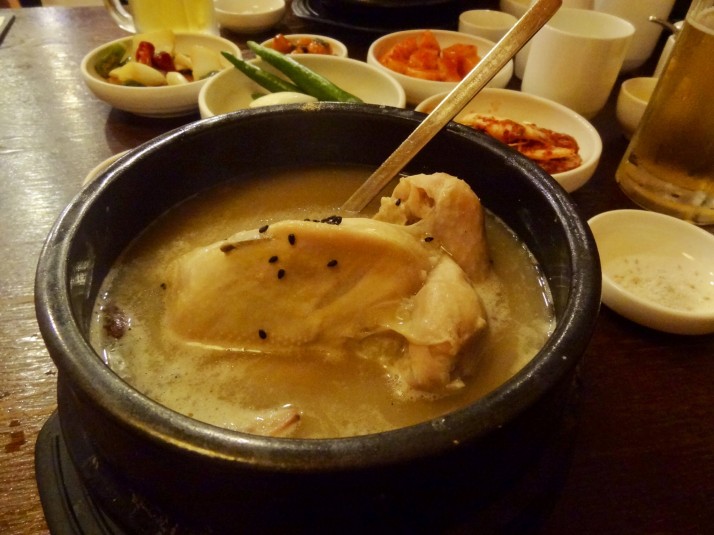 Geongang Samgyetang, described on the menu as ‘Young chicken soup with ginseng and other oriental medicines for health’ although I’m dubious about any health benefits

We tried this traditional drink in Gyeongju where it was described as ‘thick rice beer’. It’s cloudy and has a really nice smooth flavour. Served in a large bowl with a wooden ladle to dish up the individual portions into small bowls. 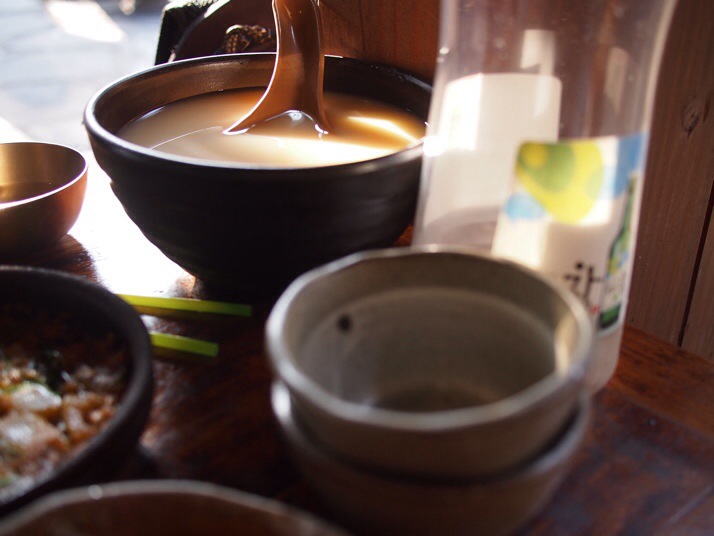 One of the most common street foods in Korea are hearty pancakes, more akin to a frittata than a crepe. Various things can be mixed into the batter, kimchi and spring onion versions are popular, and we had a delicious mung bean pancake at Gwangjang Market in Seoul. 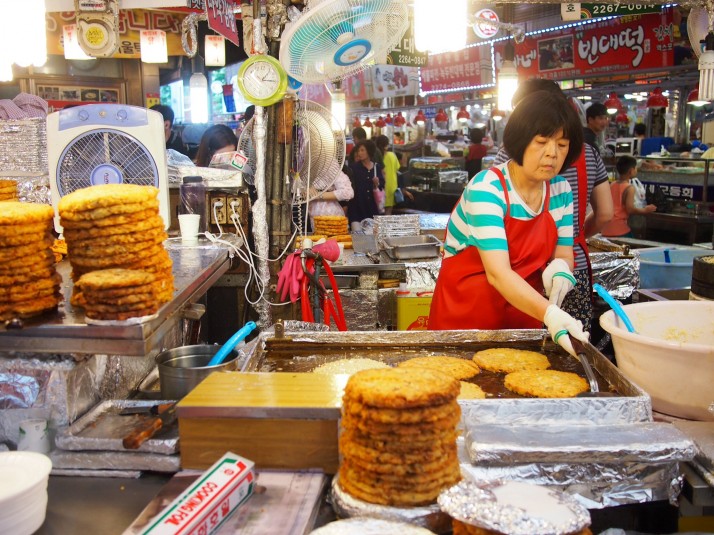