Our final excursion into the Bangladeshi countryside was in the very north of the country. We travelled by train due north from Dhaka to the town of Mymensingh and then another 3 hours by bus to the village of Birisiri, close to the border with India.

Arriving in Mymensingh mid-afternoon we set out for a wander in the town to check out the handful of sights listed in the Lonely Planet. The old rajbari (landowner’s home) built in 1905 is now a teacher training college. As there was no one guarding the gate we just wandered in along with some locals who also looked to be out for a stroll. 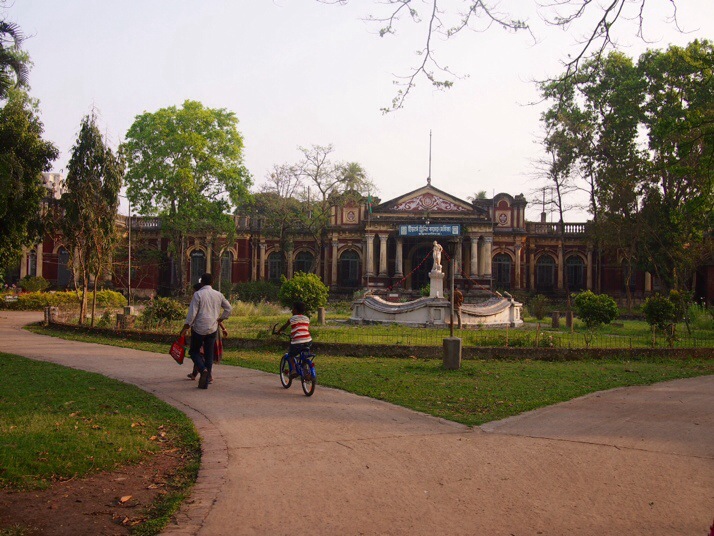 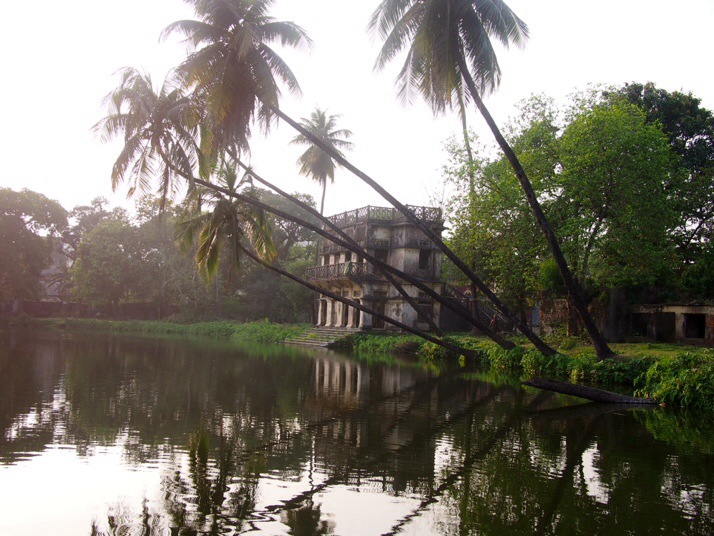 The next morning before catching the bus to Birisiri we decided to have a look around the market and twisting streets of the old town. At 9am the market was buzzing, it was heaving with people and as we squeezed down the narrow gaps between the stalls trying not to get in the way even we were feeling too overwhelmed to take photos. There was a pen full of goats at one end of a line of butchers shops, fishmongers gutting and descaling fish, and men carrying huge piles of vegetables around on their heads.

In lieu of taking lots of market photos, we stopped at a barbers shop for Andrew to get a haircut. It was under a narrow shelter on a street side and didn’t seem to be supplied with electricty so it was a scissor cut rather than the usual clippers and finished off around the edges with a cut-throat razor. The bus to Birisiri left from the chaotic Bridge bus stand in Mymensingh. As buses in Bangladesh don’t have any English signage, and in any case this bus stand was more like a field haphazardly filled with buses rather than a well ordered bus station, we took our usual course of action in such a circumstance: wander around saying the name of our destination to anyone who looks at us and following their vague arm waving until we reach a bus where the conductor is shouting frantically and gesturing like “Come on, come on, the bus is late and you’re holding it up”. As if any bus in Bangladesh has ever run to any kind of schedule, actually he’s just trying to fit as many bodies as possible into its creaking shell. 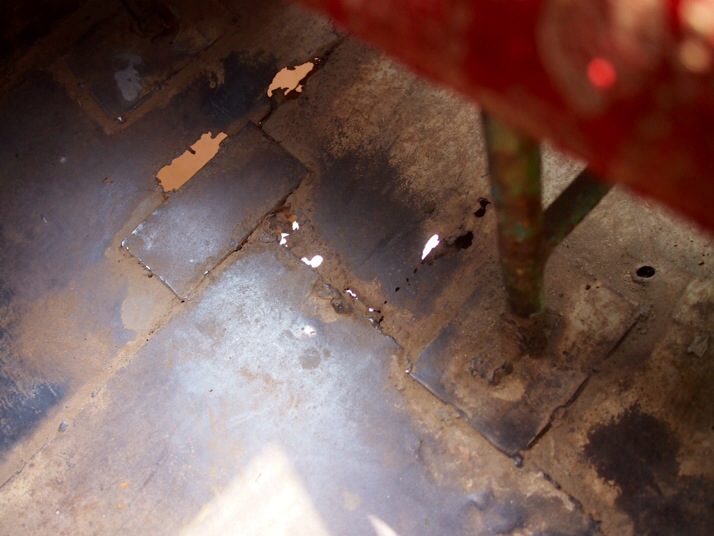 By the middle of the afternoon we arrived in the village of Birisiri to find ourselves hemmed in by a group of very keen young rickshaw drivers (there’s obviously a lack of business here and a pair of foreigners is a good prospect). We declined their offers in favour of a stretch of our legs after three hours squeezed into a bus seat, but undeterred they followed us in convoy to the guidebook’s top pick of guesthouse where we found no rooms available. So we walked back towards the main road to our next choice followed by a chorus of ‘Please sit down’ while trying not to get our legs or bags tangled in rickshaw wheels. Fortunately Swarna Guesthouse had a (very cheap and surprisingly clean) room available. 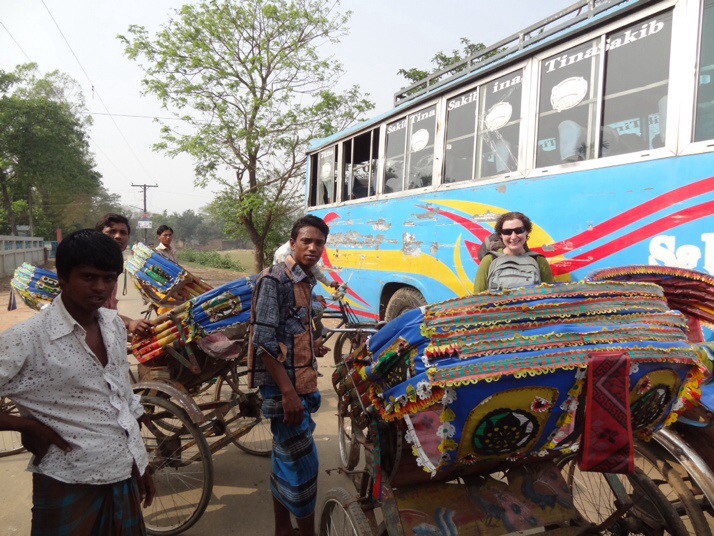 Hemmed in by rickshaws

The people of Birisiri are largely from the minority Garo people who are thought to originate from the Tibetan plateau, we definitely noticed that some of the locals had distinctive cheekbones. Another thing we noticed was that the women seemed to be more forward here than elsewhere in Bangladesh, though we’d found women before who were friendly and looking for a chat they were in the minority whereas in Birisiri the women stared, smiled and shouted out hello as often as the men, I’m not sure if this is a difference between the countryside and the city, or because the Garo people have a matrilineal culture (property is handed down the female line although decisions are still usually made by the men), or because they’re largely Christian rather than Muslim or Hindu as the rest of the country. Perhaps a mix of all three. 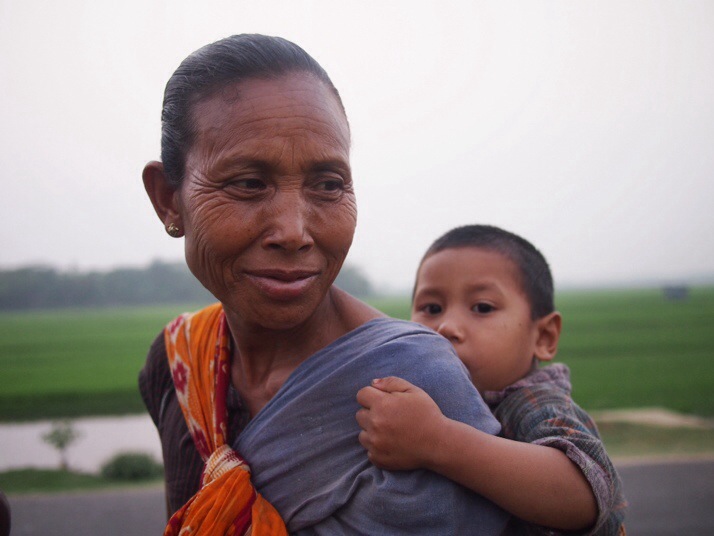 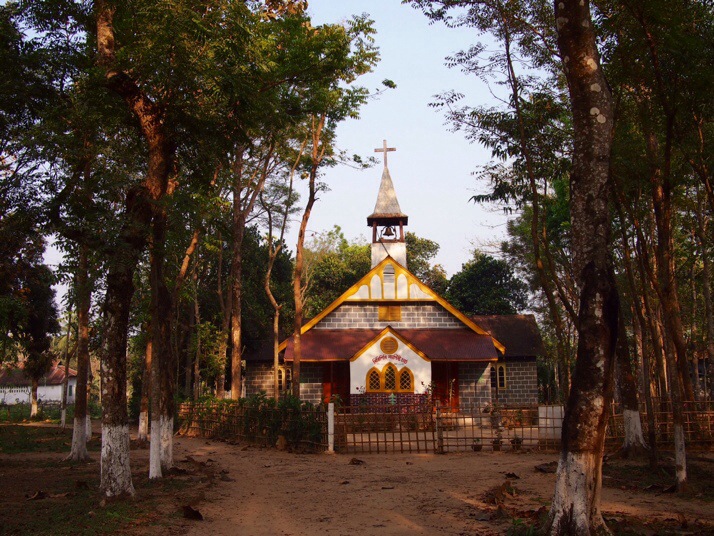 One of the churches in Birisiri

That evening we (well, mainly Andrew) negotiated with one of the entrepreneurial young rickshaw drivers for a boat trip to the China Clay Hills the next morning. His English was limited, but with the aid of pictures, charades and writing down numbers we had some kind of excursion booked for 8am and an agreed price.

It turned out to not be quite what we’d envisaged, travelling by rickshaw most of the way and then upriver to a mission and back by boat before continuing by rickshaw, but our driver Jewel was a good companion and it was fun to see some of the rural life even if we felt like our bones were being shaken to bits by the bumpy roads. 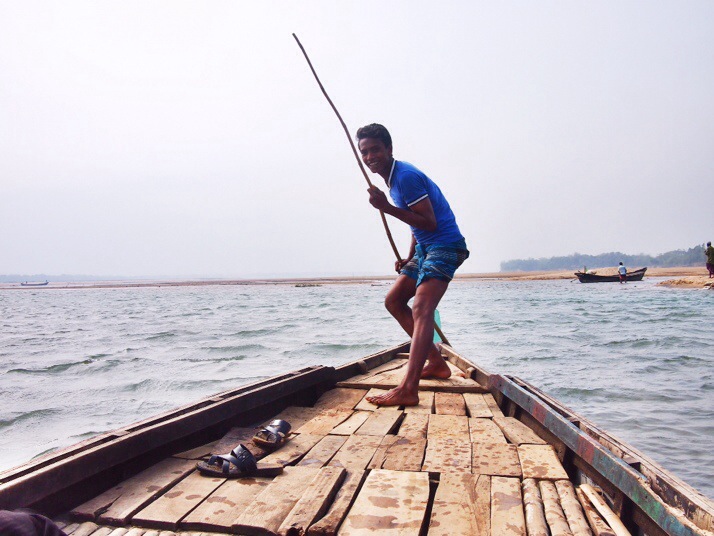 Jewel showing that he is a man of many talents, expertly rowing the boat Us looking a little windswept on the Someswari River 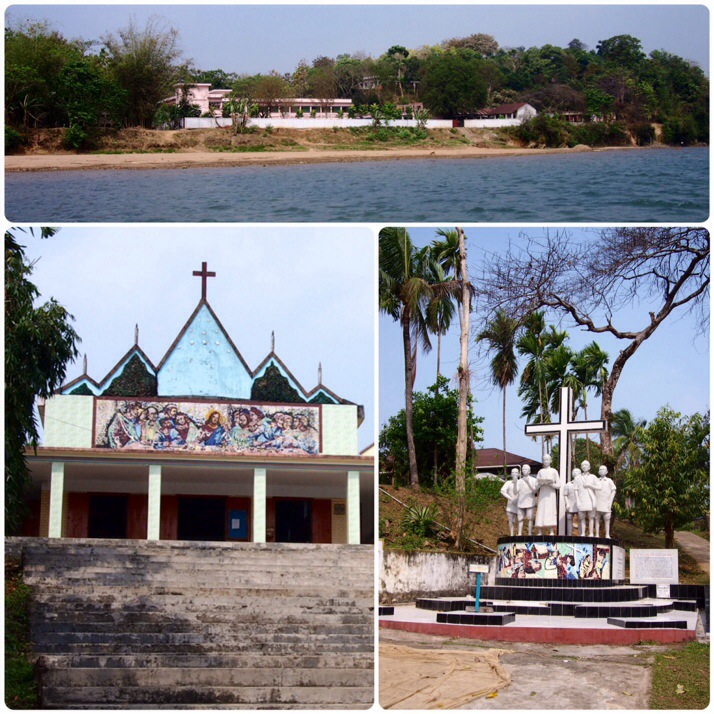 Ranikhong Mission: school from the river, church and monument commemorating the first missionary invited to visit the area

Although really the day was more about seeing the countryside, our nominal destination was the China Clay Hills, a small area of low mounds where the clay is mined for pottery and the lakes in the depressions are a startling turquoise. 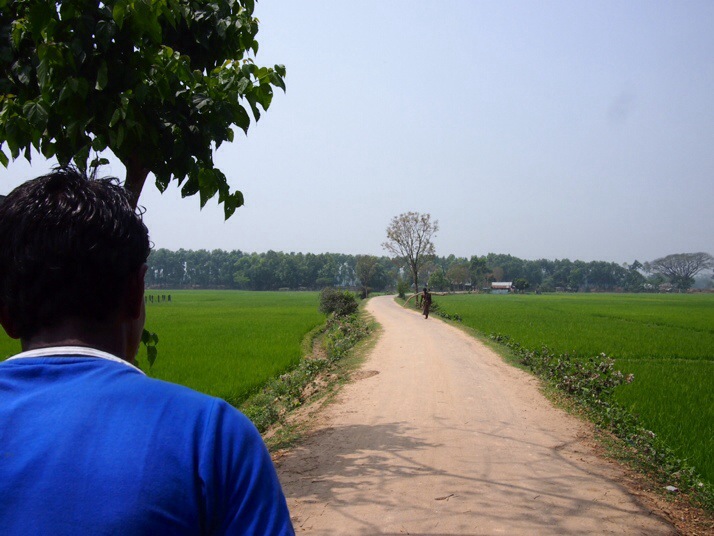 Lush green countryside from the back of the rickshaw By the end of the day we felt that we knew Jewel well enough for Andrew to ask him if he could have a go at driving the rickshaw for the last section, something he’d been itching to do since our first ride in one four weeks earlier in Dhaka. It was pretty hard work even on the flat, but he was glad to have had the chance to give it a try. We caused a fair bit of amusement amongst the other rickshaw drivers rolling back into Birisiri with Andrew at the helm and Jewel sitting in the back with me! In charge of a rickshaw!

On our last afternoon back in Mymensingh we took a local bus to the nearby town of Muktagacha with another impressive rajbari and a sweet shop which is famous throughout the land. The caretaker of the rajbari was keen to give us a tour, he only spoke a limited amount of English so we couldn’t get into details but it was enough to get the gist of the place. It looks as if the Department of Archaeology is renovating the place so it’s likely to be even more impressive if less atmospheric in future. 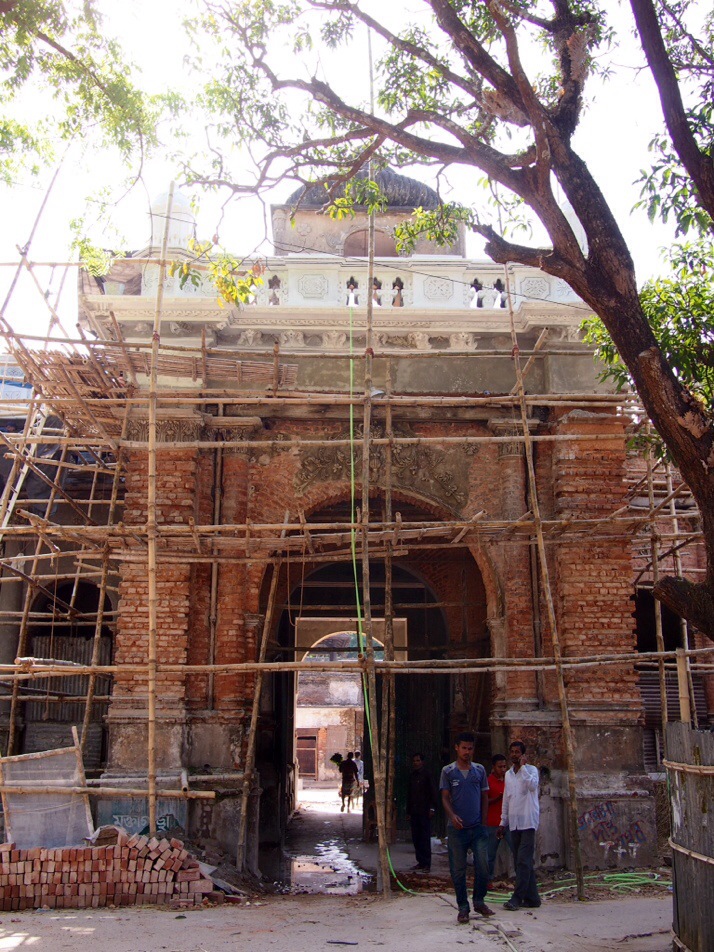 Renovation work underway on the facade of Muktagacha Rajbari Inside the rajbari (clockwise from top left): Shiva temple columns, zamindar’s house, buildings in disrepair, us in the central courtyard

Afterwards we made our way to Gopal Pali Prosida Monda Sweet Shop to sample the monda. These sweets are made from grainy sweetened yoghurt and were nice enough although they weren’t my favourite of the sweets that we tried in Bangladesh (but then I’m no connosieur!). The former zamindar (landowner) must have been impressed though, because when he tried the sweets 200 years ago he promptly employed the sweetmaker as part of his personal staff and it was only with Partition in 1947 that the zamindar’s family left for India and the sweetmaker’s descendants opened up the shop which has been doing a brisk trade ever since. 2 thoughts on “Mymensingh and Birisiri, Bangladesh”