Another 3 months under our belts. 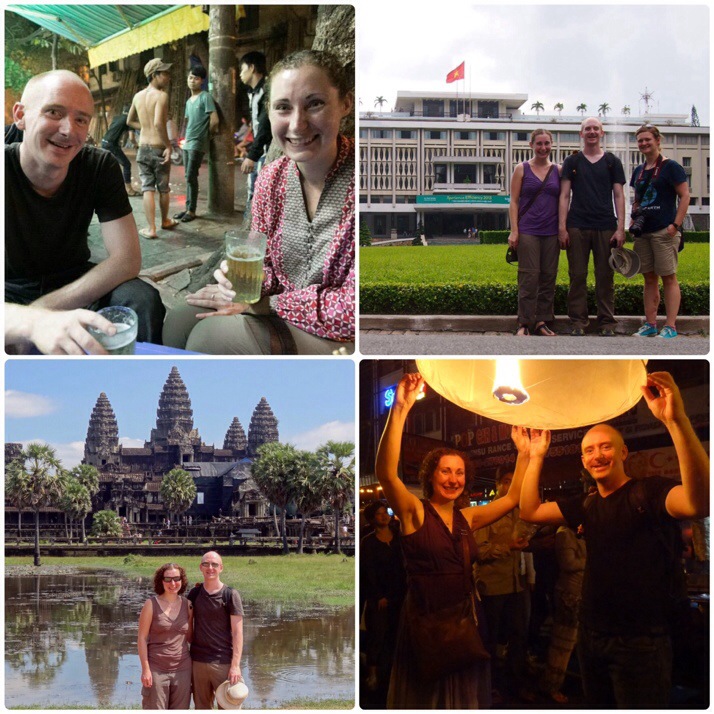 Drinking fresh beer at a street bar in Hanoi, in front of the Reunification Palace in Ho Chi Minh City with Jo, Angkor Wat, Releasing a lantern into the sky on New Year’s Eve in Chiang Mai

Vietnam, Cambodia, Thailand (total visited to date on this trip = 10)

Easily within budget, our average daily spend over the three months has been £55.89. Our daily spend to date since we left home has been £66.09. 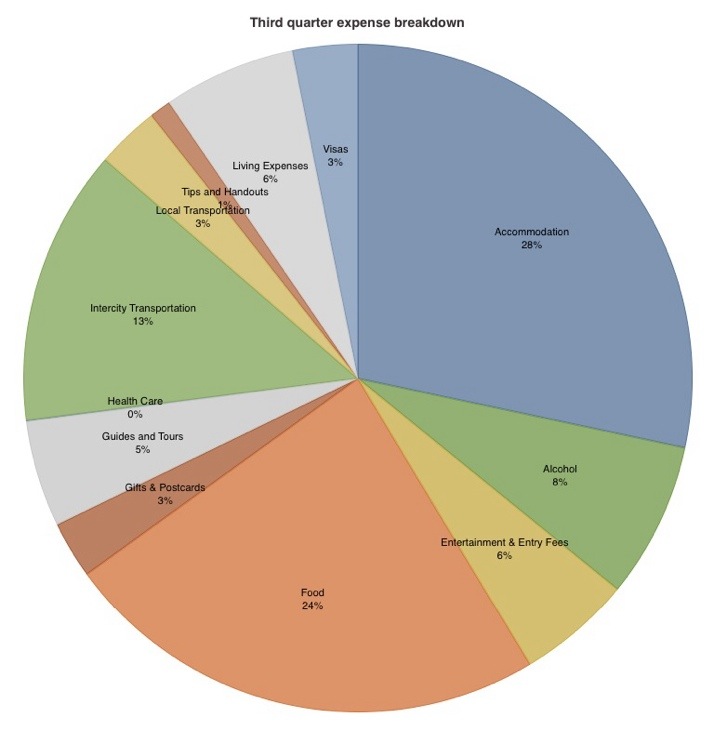 Julie – Everything that I’d read said that it’s ridiculously easy to live cheaply in SE Asia but the reality of it didn’t really hit home until we started travelling here. And while we’ve continued to monitor our spending, we really haven’t had to try to stay within budget – there’s been no penny pinching on food or accommodation so that we could afford to do some of the big experiences that we wanted.

Andrew – The sheer number of motorbikes and scooters. Yes, I know south east Asia is densely populated – especially in the major cities – but it hadn’t occurred to me to wonder how everyone would move around. And not only for the daily commute, we’ve seen motorcycles and sidecars configured to sell all manner of tasty street-food such as noodles, fried rice, dried fish, grilled fish, kebabs, phad thai, fresh fruit smoothies, tea, coffee, and banana pancakes.

I know it’s cheating a little bit but we really feel we’ve missed out on family related celebrations in the last three months. We’ve spent Christmas away from home before, but never without having a ‘Christmas Day’ on a different day before we left, and although we had a lovely day and fantastic meal here we were both a little homesick. In addition to that, both of our nephews had birthdays in the last three months (Scott was 3, and Olly was 1) and we’re hugely excited about the imminent arrival of nephew (or niece) number three but also know that we’ll be sad not to have a cuddle.

Julie – I loved the old town in Hanoi. The different craftsmen grouped together, the twisty alleys, the motorbikes with unlikely loads, and, oh, the food…the world’s best spring rolls, freshly fried prawn cakes, bowls of delicious noodle soup and 21p glasses of bia hoi (fresh beer). And, although there were lots of tourists, I loved that there didn’t seem to be, it was just lots of locals getting on with their lives and activities that didn’t have anything to do with tourism.

Andrew – I’m going to eschew the first and obvious sight that springs to mind, and instead choose the variety of things carried on motorbikes – the most memorable of which needs the stage setting so here goes: Julie, Jo and I are in a regular taxi on the ring road heading out of Saigon to the bus station, when I happen to glance across the 6 lanes of busy traffic to the on-ramp of the opposite carriageway, where the pillion on a 125cc semi-automatic scooter catches my eye because he has his arms fully outstretched like he’s on the bow of the Titanic. “Why are his arms outstretched?” I’m thinking. Then, as they join the 60km/h carriageway I see it. He’s holding upright, a full pane of glass, without a frame, about the size of a patio door.

We were eating crabs in Kep. After watching our crabs go from kicking to cooked in the space of 10 minutes, we’re just tucking in when a passing Chinese looking man told us to be careful. He prodded at one of our crabs and said they would probably be OK, but that they might not be fresh. Thankfully, he mistook our look of complete incomprehension for misunderstanding, whereupon he felt the need to explain he was French.

That would be David from our day trip in Battambang. Not only was he great fun to be with because he was always joking, but his relaxed, unhurried demeanour put us at ease which meant we enjoyed the sights around Battambang more. He also arranged for his friend to meet us in Siem Reap, and when we got off the boat Mr Sokha was waiting for us with our name on a card and a big smile.

Julie – Surprisingly, finding good accommodation. Because it’s so cheap, it’s very difficult to filter anything out. Whereas previously we have been able to look at the handful of options within our budget and then make a decision based on location and online reviews, in SE Asia we’ve found that restricting price really only excludes the 5-star resort places, and so it’s become much more about trawling reviews and deciding what level of comfort/local experience we want. On occasion this has worked well (we found an incredible deal on a hotel in Hue, and the family-run guesthouse where we stayed in Kampot was great) but it hasn’t always worked out so well.

Then when we arrived in Chiang Mai we’d thought it would be easy to find an apartment to rent for two months, but for various reasons it just seemed to be really difficult – we’d see an advert for a place and it would already be gone, or they wanted a six month minimum contract, or it was miles out of town, or there was no kitchen/swimming pool (OK, I know that sounds like a luxury, but after the place we stayed in Bangkok it was something we were both keen on). By the time we saw the apartment we eventually rented we didn’t care that it was 50% more than we’d hoped to spend or that the wifi was extra, we just wanted to move in.

Andrew – We were getting quite proficient in Russian, picked up enough Mongolian to be polite, and our good friends Isaac and Rebecca gave us a crash course in Mandarin, but I’ve found it really difficult to learn the south east Asian languages: Vietnamese, Cambodian and Thai. On reflection I think there are two reasons: firstly, like Mandarin, they’re quite hard for western minds and mouths to pick up – they have tones or intonations (4 in Mandarin, 6 in Thai), and the written word is, at first glance, impenetrable.

Secondly, and quite possibly a consequence of the firstly, it is too easy not to speak the native language. Since hitting Vietnam, we’re on the well-travelled tourist circuit and as most people we would interact with speak enough English, so it’s too easy for us to be lazy. Indeed, most of the Thai wats have a regular thing called “Monk Chat” where we’re encouraged to help Monks improve their English!