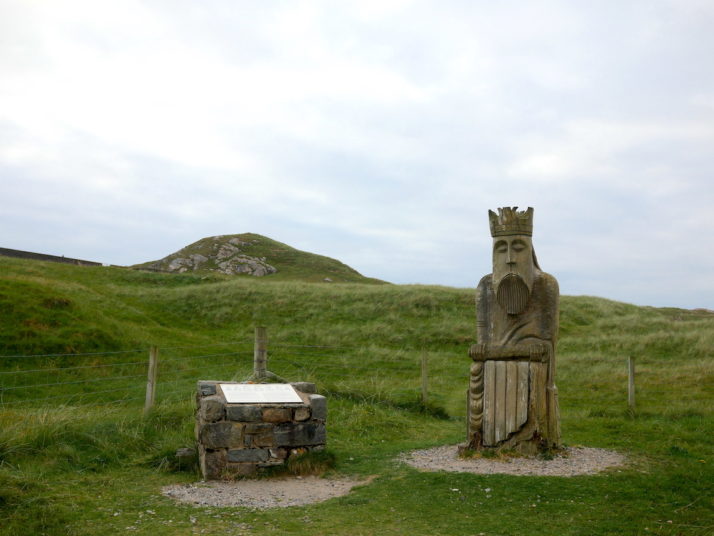 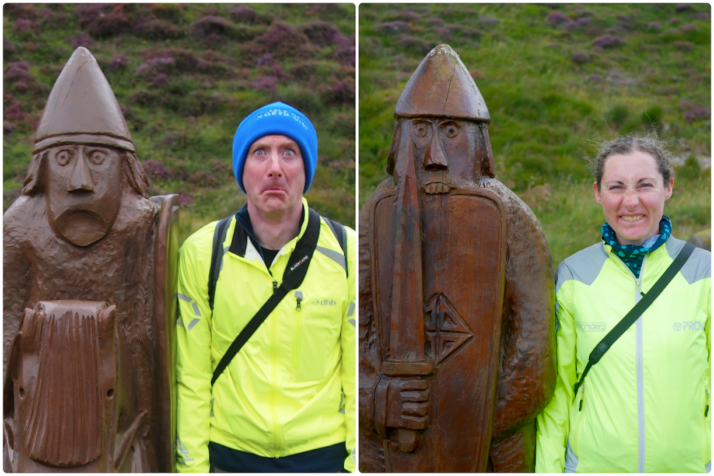 If anything, the midges were even worse in the morning. After eating our breakfast in the blackhouse, we struck camp as quickly as we could and struggled to get the panniers loaded on the bikes while keeping the clouds of midges off our faces. The only relief was to begin cycling, at which point they couldn’t keep up with us. Ha!

We retraced our route back through the rocky landscape to the main road and soon arrived in Tarbert, the capital of Harris. We restocked our food supplies making sure we had enough to get us through the weekend until the shops reopened. That left our panniers pretty full but passing the Isle of Harris gin distillery on the road out of town we found that we had space for a bottle of gin and some tonics! 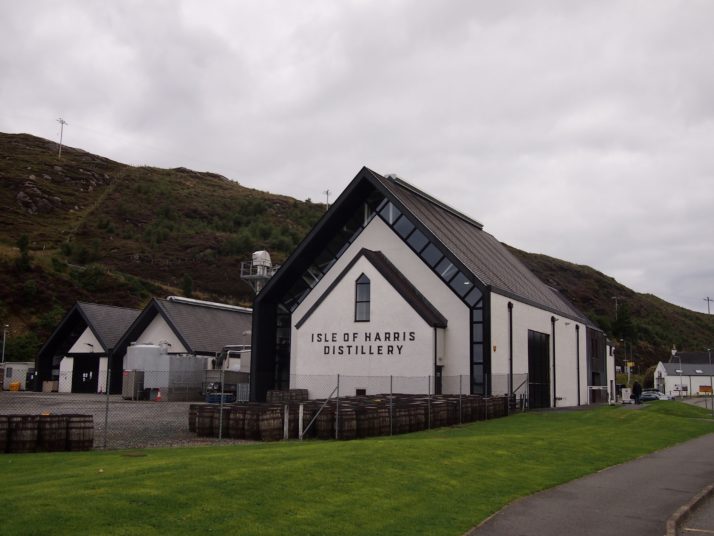 For the most part the Hebridean Way is quite flat with gentle ups and downs, we’d heard that the exception to this was just after Tarbert when there was A HILL. It was definitely the most uphill section but really not that bad, neither particularly steep nor long. From there it was rolling ups & downs between dramatic craggy hills until we stopped for an early lunch in a spot with a beautiful view over Loch Seaforth. From there we were zipping down the other side of the hills at a rather alarming top speed of 37mph which brought us into Lewis, our final island. Confusingly its not actually a separate island to Harris though they are very distinct in landscape. Heading north and with a slight tailwind and pretty flat road the cycling felt really good. There’s a real lack of campsites in this part of Lewis and we’d thought to wild camp, but having arrived at our potential camping spot around 3pm and with knowledge of bad winds and rain forecast for tomorrow we decided to press on and do 2 days of cycling in 1. 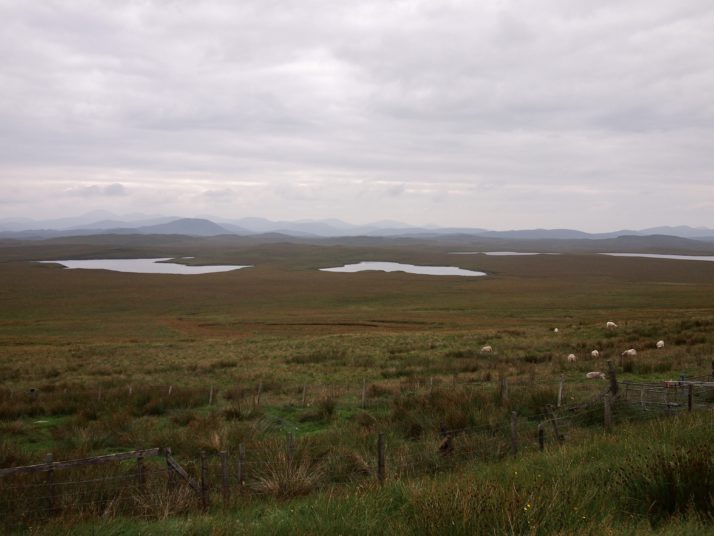 As we crossed the island from the eastern coast to the west we had a constant view of the hills of Harris to our left. They looked like a painting of an imaginary mountain range.

Reaching the western coast we turned off the official Hebridean Way trail towards Uig. At about 45 miles into the ride, I was still feeling pretty good though Andrew was starting to tire. The last 20 miles felt never-ending though the scenery made up for the tired legs. Eventually we arrived at the beautiful campsite in the dunes at Ardroil beach though as we pitched the tent the midges were annoying again. Instead of setting up the beds we went for a walk on the huge beach accompanied by a tailless dog who kept bringing us bits of seaweed stalk and looking at us expectantly. 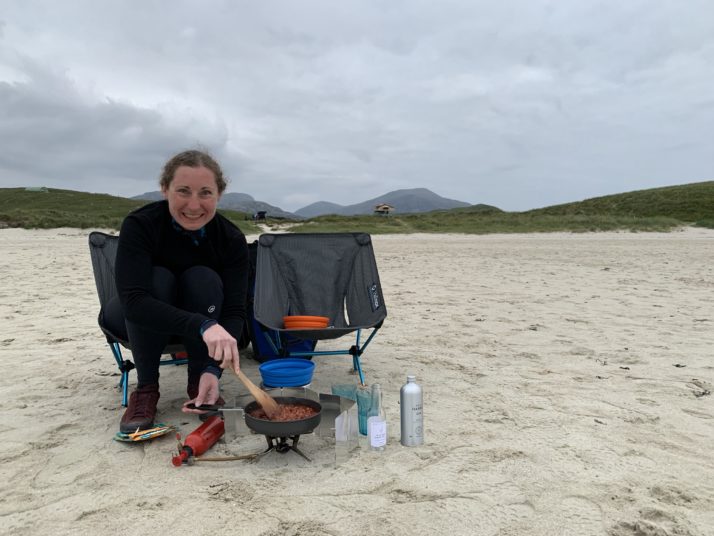 We decided to take everything out on the sands and make dinner there. It ended up being one of our favourite memories of the trip, in our new camping chairs, eating dinner and drinking Harris gin and tonics as the light slowly faded.

An epic day, over 65 miles which would be a long day for us even without the extra weight of the bags. 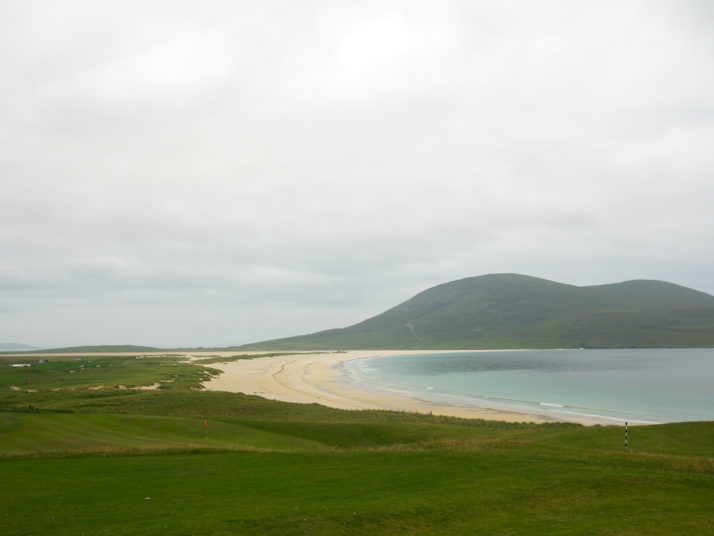 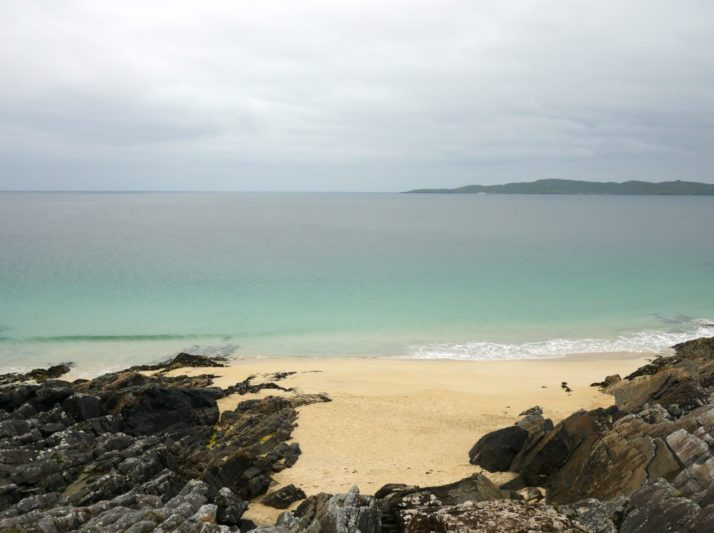 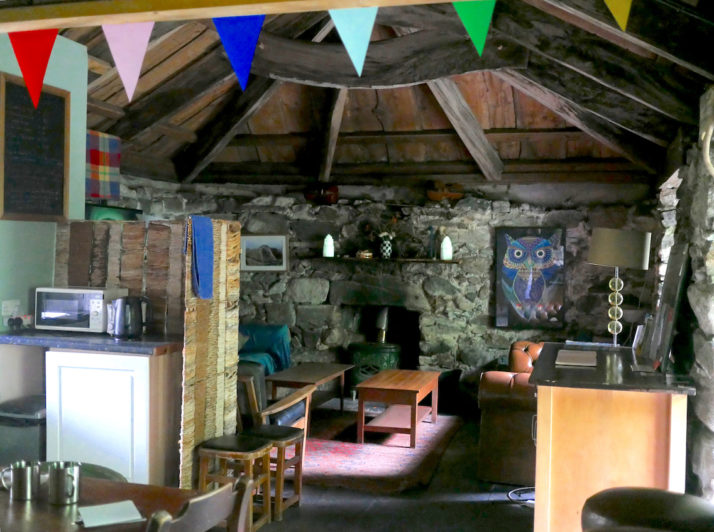 We woke to a beautifully clear, crisp and sunny morning with a fairly short ride ahead of us to make the second and final inter-island connecting ferry. This north western area of North Uist is how I had imagined the Outer Hebrides: Remote. Sparse. 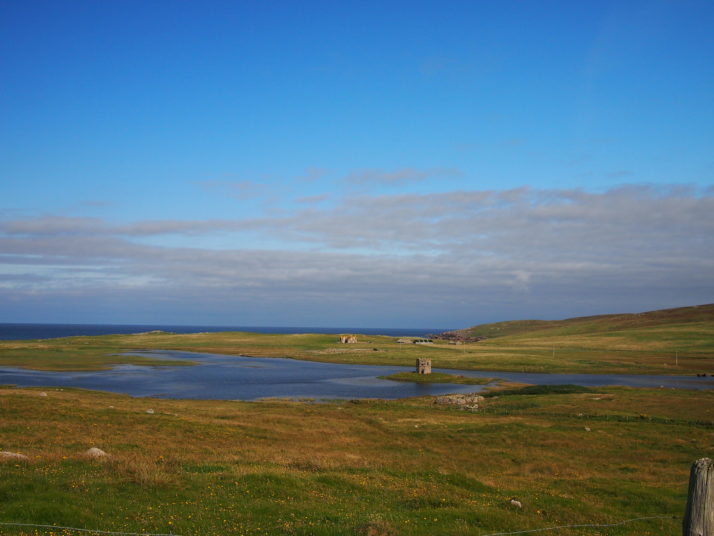 Scolpaig Tower, a small folly built on an island in a loch. A suitable metaphor for the sparseness of this part of the Outer Hebrides and is why I think North Uist is my favourite of the trip 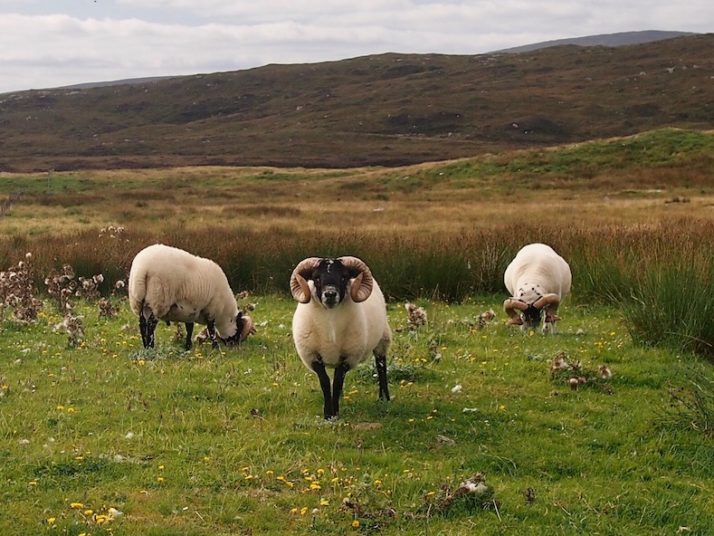 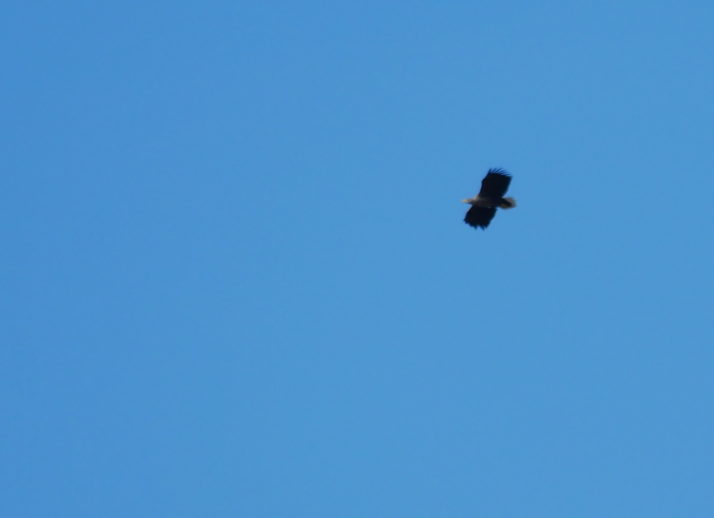 A Sea Eagle! It was circling overhead long enough to get the zoom lens on the camera and this is the best photo – it was about a mile away at this point

The causeway onto Berneray seemed like it was always going to be over the next rise or just around the next corner, instead it teased us, just out of reach with more sparse rolling countryside until eventually we were leaving North Uist. After a very decadent packed lunch of local smoked salmon and seaweed water biscuits, we took the ferry hoping we’d see sea otters. Sadly it wasn’t to be, and as the terminal is pretty much at the causeway we didn’t see much of Berneray either.

We dropped our bags at the bed and breakfast in Leverburgh – our home for the next couple of nights – and with lightened bikes headed south east to Rodel to visit St Clement’s church which has some very detailed carvings inside and out. St Clements Church at Rodel. We got to it and the signs said follow the road to the right (even though the parking was straight in front of us) and we ended up cycling all the way around it where we serendipitously passed The Girnal – an old storehouse in Rodel’s tiny fishing harbour

We ended the day with a lovely meal in The Anchorage.

After a rude awakening just before 5am when the truck started up his engines we dozed for a while. The wind had dropped overnight and a glance through the mesh windows of the tent showed an alarming number of midges gathering in our porches… We packed as much as we could inside but eventually we had to run the gauntlet and unzip the tent. Fortunately, it wasn’t too bad once we were outside and there was enough breeze that we felt safe to boil the kettle and have a spot of breakfast without being eaten alive. 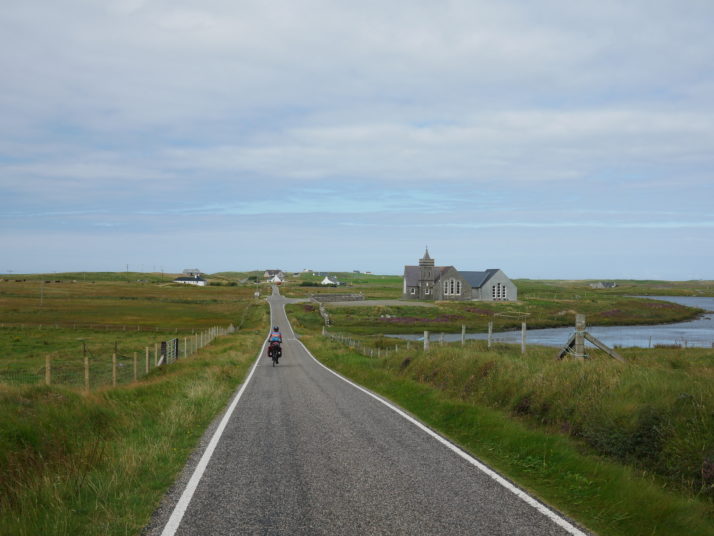 The road barely touches the corner of Grimsay and we were soon across the next causeway onto North Uist, where we found a lot more water than the earlier islands with the gently rolling road across the moorland passing many small lochs. Entering the village of Carinish, I saw an information board in front of a small church. Tourist information boards had been few and far between so far, so I pulled across to see what it said. It referred to the ruins of Trinity Temple (Teampull in gaelic) which was along the track behind the chapel and across a field of grazing sheep. A medieval ecclesiastical college and monastery, we had a quick look around but it was built above swampy ground and was swarming with midges. The remains of Trinity Temple in Carinish

We didn’t want to take the ferry to Harris until tomorrow which meant we either had a short day and a stay at the campsite at Balranald in the island’s north-west corner or carry on a bit further and look for another wild camping spot. Tired from yesterday’s ride and fancying a shower we opted for the former. An early finish to the day’s cycling meant that we had time to wander the circular path around the neighbouring RSPB reserve. Mainly consisting of machair, a wildflower filled coastal grassy plain, it is an important habitat for ground nesting wading birds as well as the endangered corncrake. The charity also works with local crofters to preserve traditional farming techniques which protect the nests. The path through the machair at Balranald Nature reserve

On the way to the campsite we had stopped in the very tempting factory shop of the Hebridean Smokehouse so our dinner of pasta pesto was made much more luxurious with a side of smoked scallops, afterwards we retired to the tent to sample a couple of miniatures of the local Downpour gin.