We arrived in Phnom Penh, the capital of Cambodia, by bus from Ho Chi Minh City in Vietnam and were immediately surprised by how many obvious differences there were between the neighbouring countries:

Phnom Penh is a small city and you can cover a lot of sights by walking, much to the disappointment of the many tuk-tuk drivers who accost you every few steps. We found two good routes, one in our Lonely Planet taking us from Wat Phnom in the north to the Independence Monument in the centre, and one published by Khmer Architecture Tours taking in a range of different building styles throughout the central area of the city. 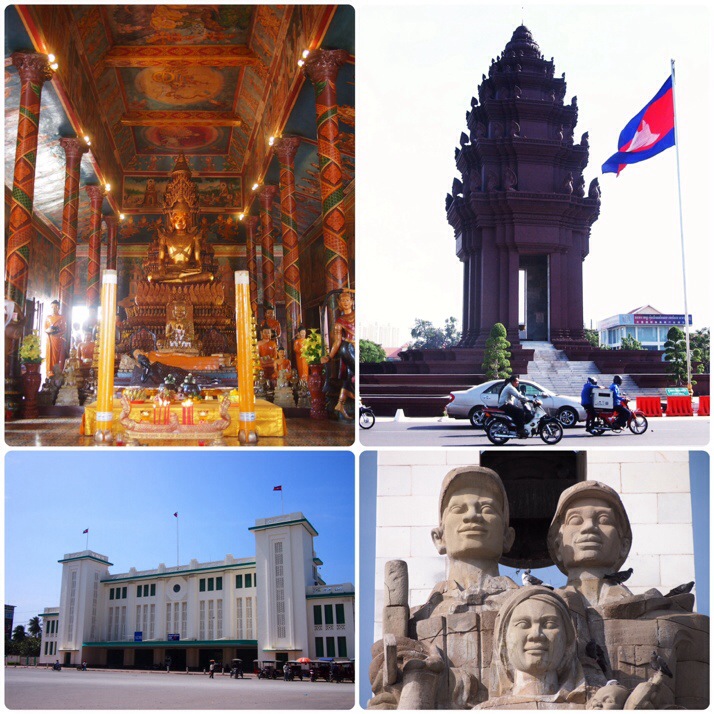 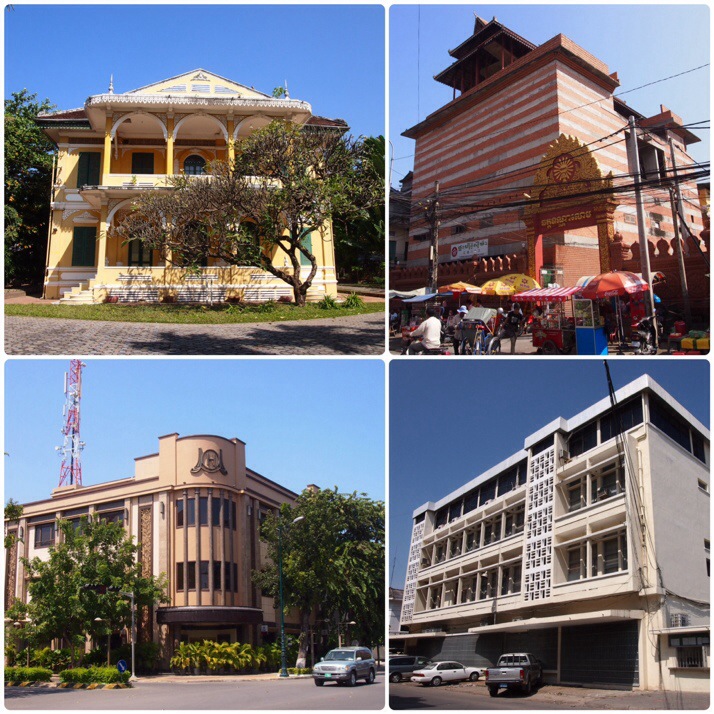 Different building styles in Phnom Penh (clockwise from top left): Old royal villa from 1900-1910, ‘Hiroshima House’ is an example of Japanese De-Constructivism in Wat Ounalom, the 1960s former US Operations Mission building, the old Peugeot car factory and sales office (1935-45) was a favourite of ours 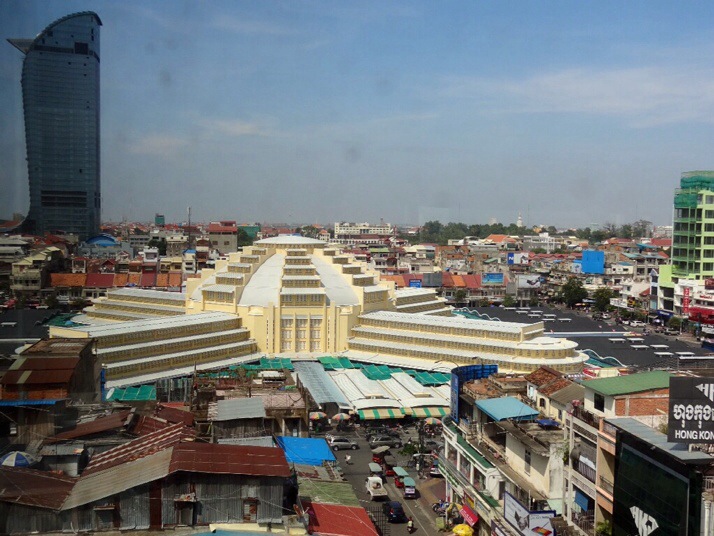 The impressive art-deco Central Market was built in 1937

Cambodia’s National Museum is located in a beautiful traditionally styled building right in the centre of Phnom Penh. It houses a good selection of Khmer sculpture taken from temples around the country as well as some wood carvings, ceramics and archaeological artefacts. The galleries are arranged around a lovely courtyard garden. 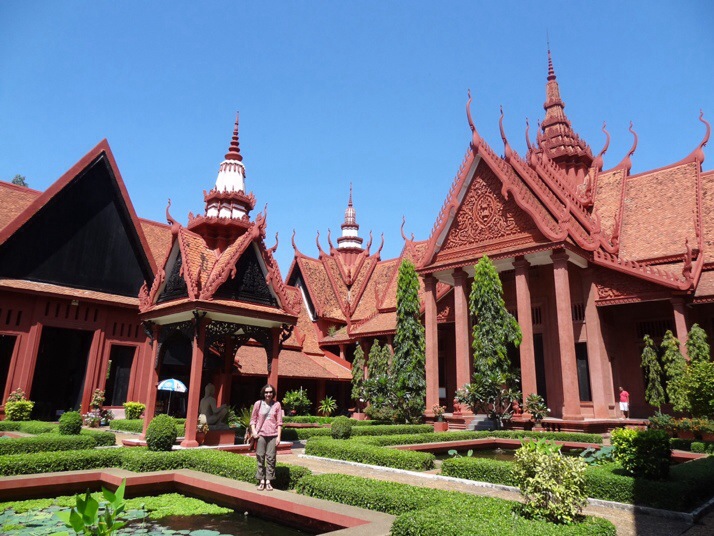 Julie in the courtyard garden 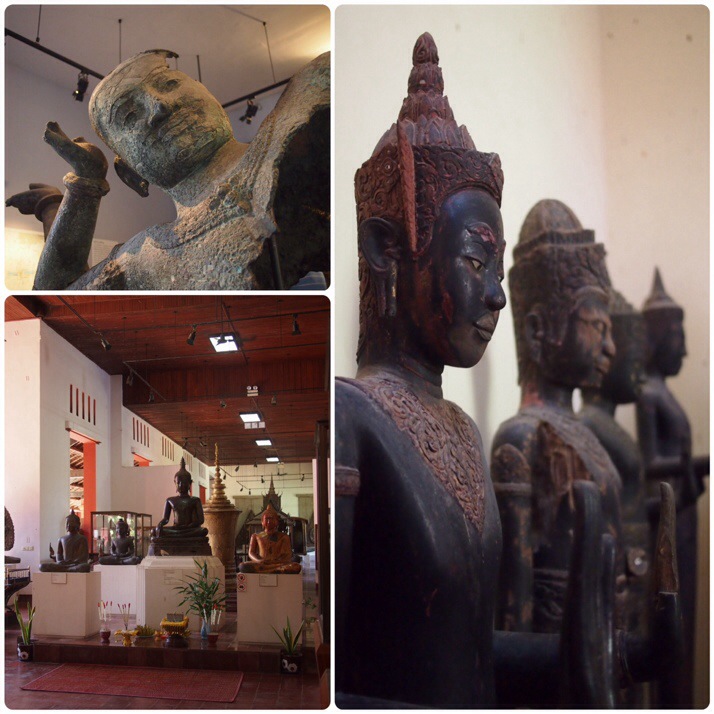 Exhibits inside the museum

It’s not possible to visit the palace itself as Cambodia has a king and, naturally, he lives there. However, access to some of the surrounding buildings, as well as the magnificent Silver Pagoda which stands in the palace grounds, is allowed. 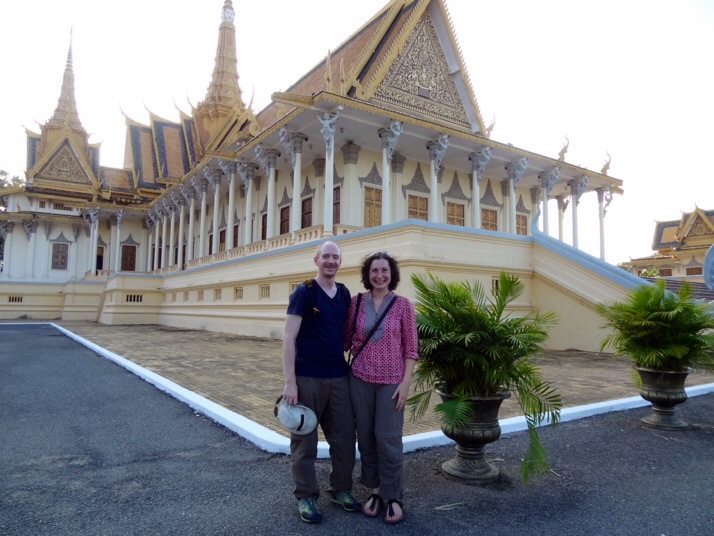 The Silver Pagoda takes its name from the 5000 silver tiles (each weighing 1kg) which cover the floor of the central temple. These are mostly covered by carpet so that they don’t get worn out by crowds of shuffling tourists, but it is possible to catch a glimpse of them around the edges of the room. The pagoda also contains other precious relics including golden and diamond encrusted Buddha statues! 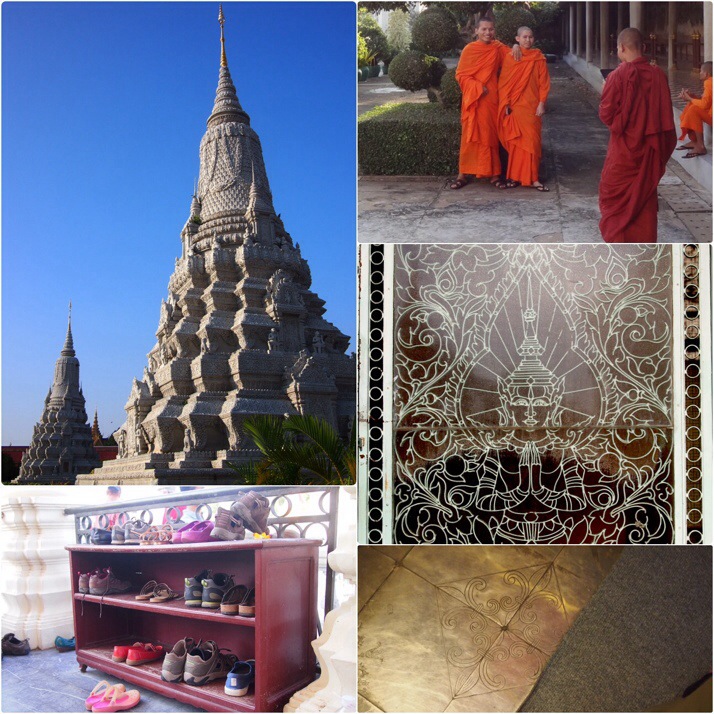 Silver Pagoda (clockwise from top left): Stupas in the pagoda’s grounds, sightseeing monks taking photos of each other with their phones, wrought iron gate, silver floor tiles, you have to take your shoes off to go inside 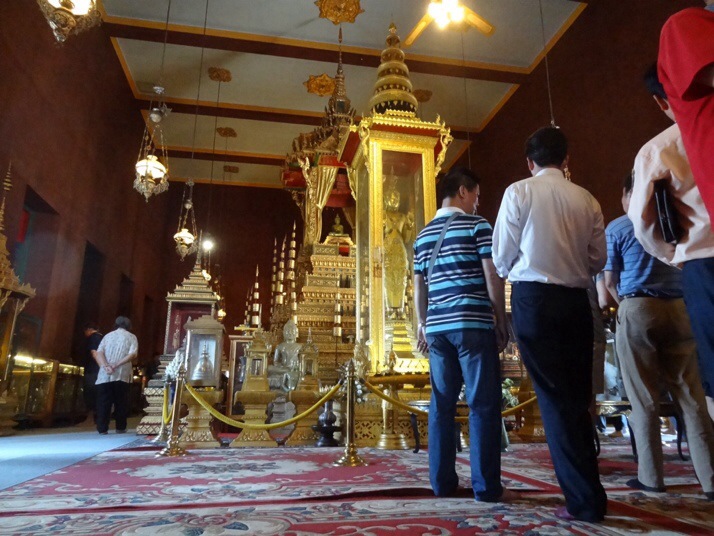 Treasures inside the Silver Pagoda

These two sights give an insight into Cambodia’s troubled history during the Khmer Rouge regime. We knew they wouldn’t be an easy visit but it was definitely something that we both wanted to learn more about. Tuol Sleng was our first stop. This former school building was used as a prison where the Khmer Rouge tortured people accused of opposition to the regime. Once they had confessed to whatever was required they were executed, without exception. Very little has been changed as regards the structure of the building and it’s possible to see the individual cells crudely constructed of bricks in the former classrooms. 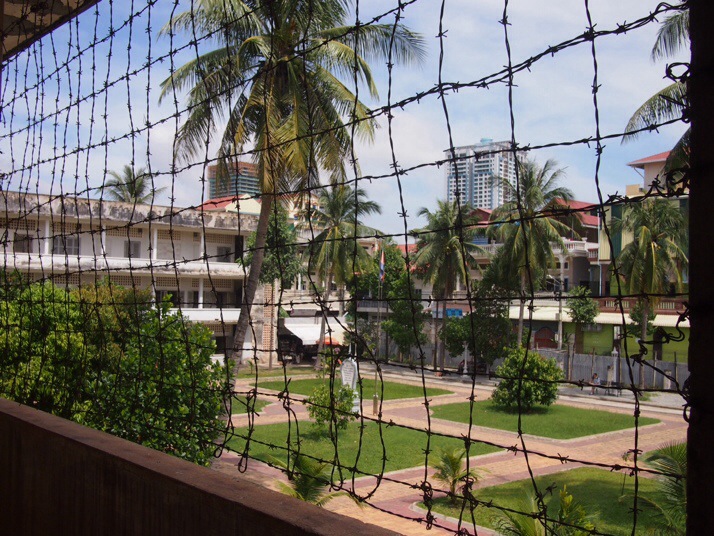 Our guide told us of the terrible practices that went on inside the prison as well as some of her own tragic personal story. She was about 10 years old when the Khmer Rouge took control of the country and her father, who was an army officer, as well as two of her siblings were killed before she, her mother and one remaining sister escaped to Vietnam. It was incredibly moving to hear the stories from someone who had survived the terror. 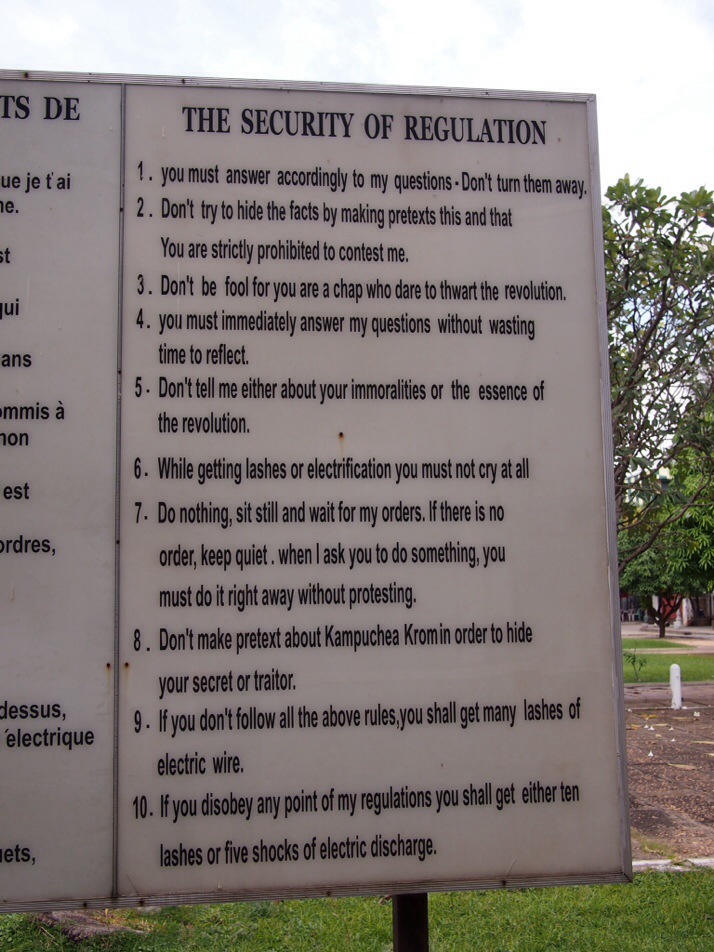 Around 20,000 people were processed through Tuol Sleng during the 4 years that the Khmer Rouge were in power and only 7 are known to have escaped alive. On arrival prisoners were logged and photographed. Many of these photographs are on display inside and some Cambodians have found out what happened to their loved ones by seeing the photographs here. 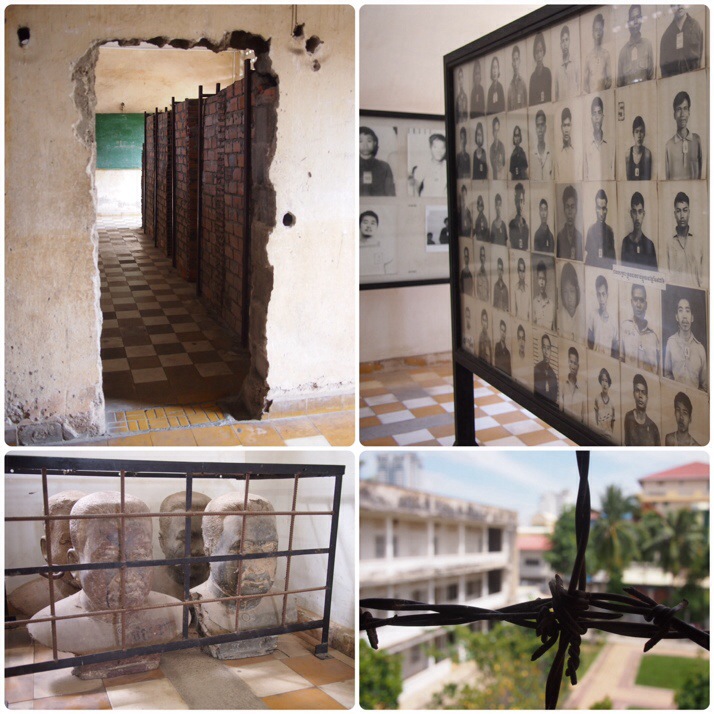 Inside Tuol Sleng (clockwise from top left): cells were built inside the old classrooms and walls knocked through, display of photographs, barbed wire on the balcony, busts of Pol Pot the Khmer Rouge’s leader

Choeung Ek is the site of the extermination camp (Killing Fields) associated with Tuol Sleng. When prisoners were to be executed they were loaded into trucks and brought 15km outside the city to this site where they were killed and buried in mass graves. They were often bludgeoned to death to save bullets. Nowadays the site is peaceful and green but you can see the undulations in the ground where the mass graves have been excavated and the huge memorial stupa where exhumed skulls and other large bones are kept. The audio-guide which is included in the ticket price is excellent including interviews with a former prison guard as well as normal Cambodians who lost family to Choeung Ek. 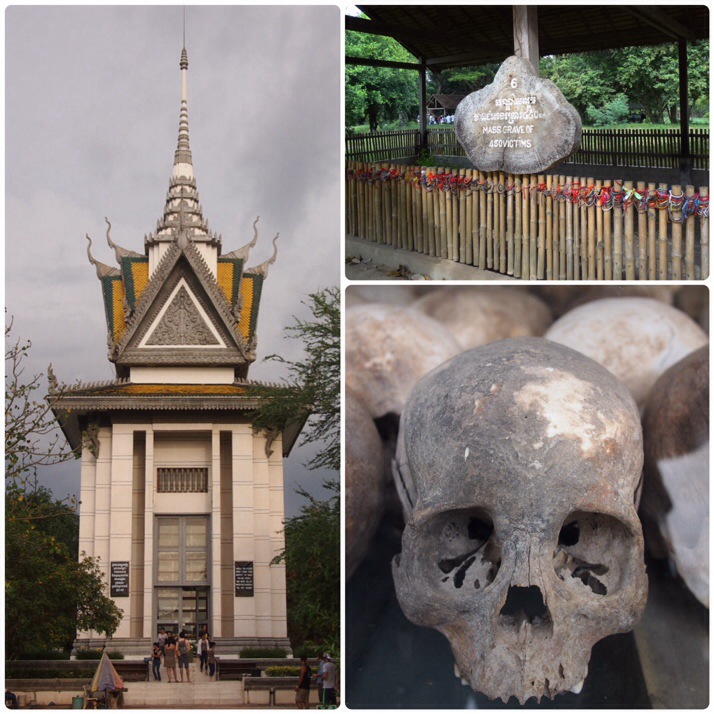 As we’d expected it was a hard day. We learnt things about the regime which were almost unbelievable in their horror, leaving us to reflect on how humans can behave in such ways and making us realise how lucky we are to have lived in a peaceful time and place.