We don’t usually take guided tours. For one thing they’re generally pretty expensive so don’t fit into our regular budget, but also they usually try to cram a lot into a short time so that it can feel a bit rushed and one of the reasons that we’ve taken this trip is so that we can take our time – we can afford to travel by slower, cheaper public transport and absorb new places at a more relaxed pace.

But in Krasnoyarsk we decided to make an exception. We wanted to visit the hydroelectric dam at Divnogorsk about 40km away. Our guidebook informed us that to get there on our own we should take a hydrofoil from the city’s river station. We researched the times and found that the boats only ran 3 times a day at the weekend and that tickets are sold on board. On Sunday, we got to the river station at 1.45pm for the 2.30pm departure. Lots of locals were also queuing so when a boat pulled up at 2.15 we got on with everyone else. We were slightly perplexed when it pulled off straightaway – wasn’t it supposed to leave at 2.30? And when Andrew went to buy a ticket the lady told him that no this boat doesn’t go to Divnogorsk… To cut a long story short, we were on a kind of river bus which serves the bankside and island settlements of the Yenisey River and doesn’t travel as far as the dam. So when it turned around we bought a return ticket and treated it as an unexpected river cruise… Us on our ‘river cruise’ 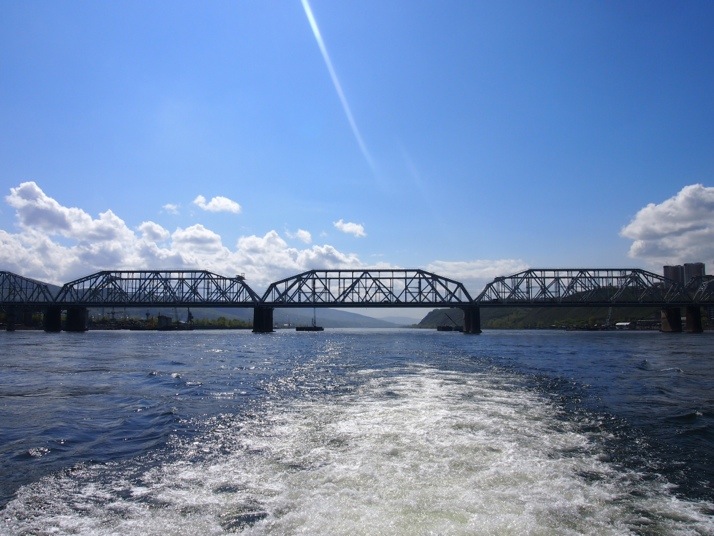 With our attempts to get there on our own foiled, we emailed Anatoliy who runs SibTourGuide (also mentioned in our guidebook). He suggested that we might like to join a South African guest who he was taking on a ’10 Ruble Tour’ on the Tuesday as the trip to the dam is included in this full day excursion.

The Russian 10 ruble note (worth about 20p) features a number of places around Krasnoyarsk and Anatoliy has built an itinerary around these spots and others of interest. 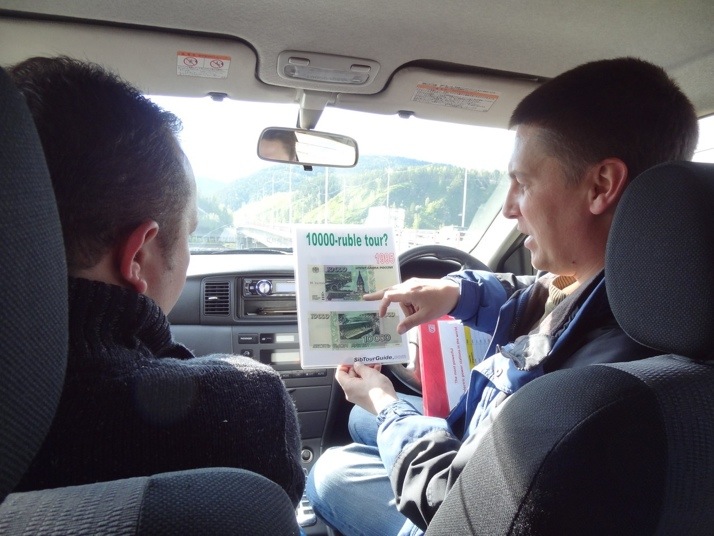 Anatoliy collected us from our hostel and then we picked up the South African, Marius, from his hotel. The first port of call was the tiny Chapel of St Paraskeva Pyatnitsa which stands on a hill overlooking the city. It was built on the site of a watchtower which was part of the city’s 17th century fortress. Our visit was timed to coincide with the daily noon cannon firing which started in 2003 – the 375th anniversary of the founding of Krasnoyarsk. It was LOUD! 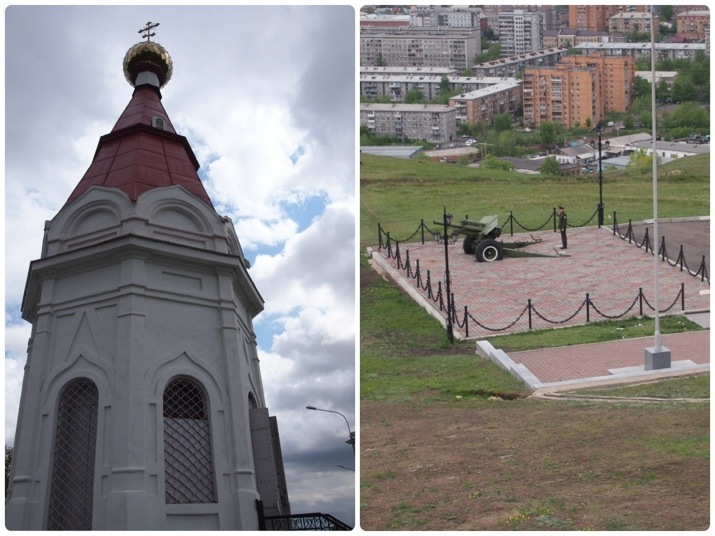 Chapel of St Paraskeva Pyatnitsa, and cannon about to be fired

Of course one of the advantages of a tour is that you have an expert on hand to tell you the history and significance of the sights that you’re seeing, and if they’re good (and Anatoliy is), entertaining anecdotes to keep things interesting. From the chapel on the hill we made a few stops in the city – at the war memorial, on the riverside, and next to the steamship which is famous for carrying Lenin to his Siberian exile before the revolution, and also ferrying the last tsar, Nicholas II, across the Yenisey while he was still a prince and on his world tour. 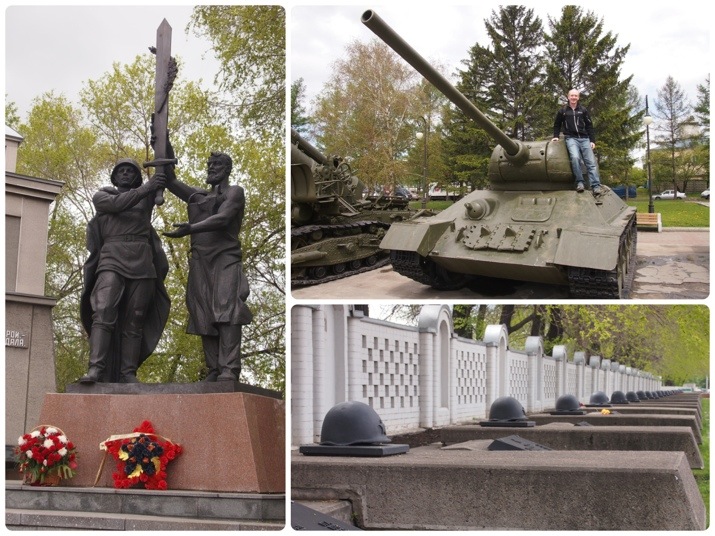 War memorial representing an armaments worker and a soldier, Andrew on a T-34 tank, graves of soldiers who died in Krasnoyarsk’s hospitals 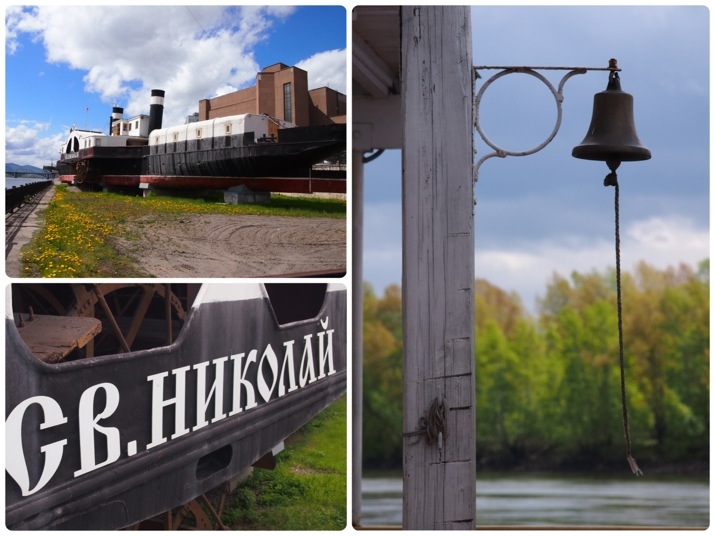 Next we headed over the Communal bridge (also featured on the banknote) and upstream for a couple of stops before reaching the dam. First was a lookout point featuring spectacular views and a large sculpture of a sturgeon, or ‘King Fish’ as it is known in Russian. From the lookout point we could also see the village of Ovsyanka, the home of celebrated Russian author, Viktor Astafyev, who wrote books telling of the life of real Siberian people in Soviet times and was treated as a mentor by Russian leaders in his old age. His home is now a museum of how life was in the first half of the 20th century. Us at the lookout point 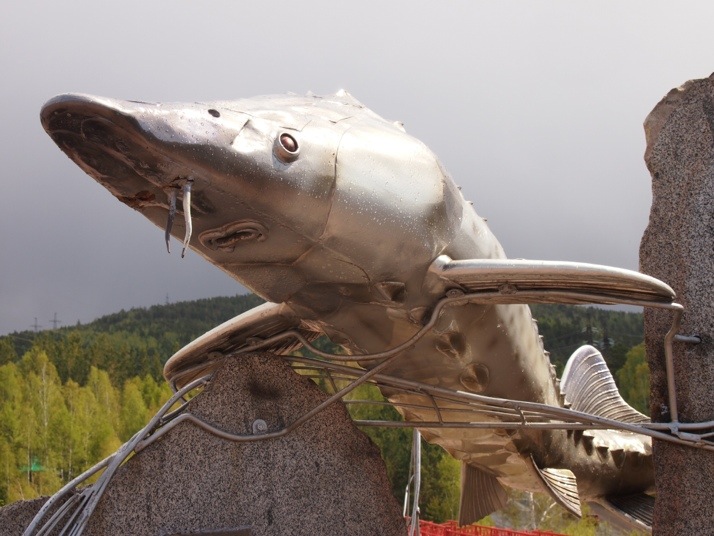 Astafyev museum (clockwise from top left): Anatoliy explaining the importance of the samovar, cow bells of differing sizes (to make different noises so that everyone could recognise their cow), portrait of Viktor Astafyev, outdoor tools

The town of Divnogorsk was built for the construction of the dam which started in 1961 and was completed between 1968-72. We made four stops here. First in the town itself, next in front of the dam which is currently the 6th largest in the world in terms of production capacity (when it was built it was the 2nd largest). Here we also got some great views of eagles circling overhead. 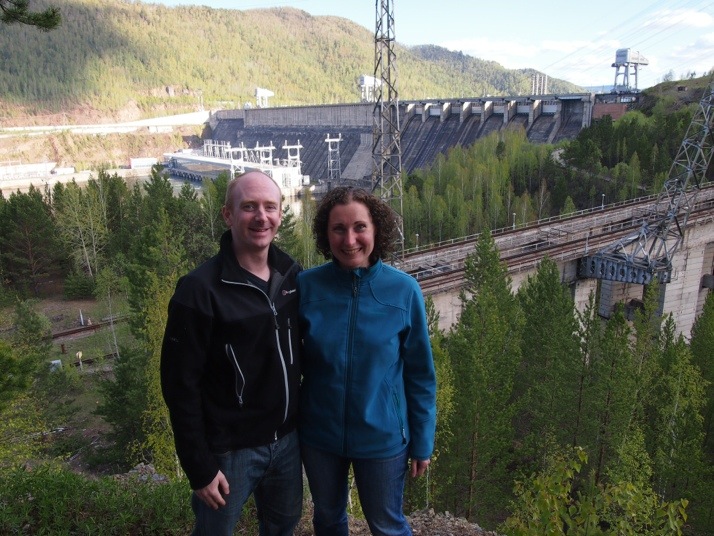 Us in front of the dam 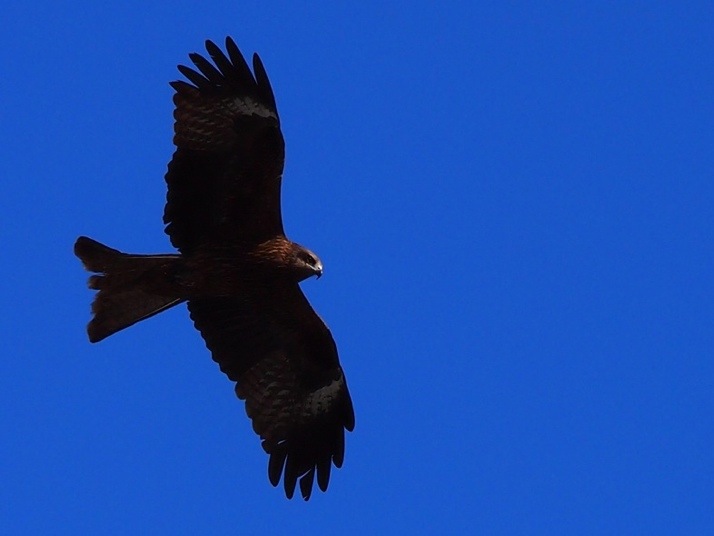 The third stop was at the side of the dam to get a good view of the boat lift. This is something like a giant bathtub that takes barges up to the top of the dam and back down to the river. Unfortunately we didn’t see it in action as it is not used so much nowadays (more of the freight traffic is by road than river now). Finally we made a stop behind the dam at the incredibly peaceful Krasnoyarsk Sea, the lake formed by the dam. 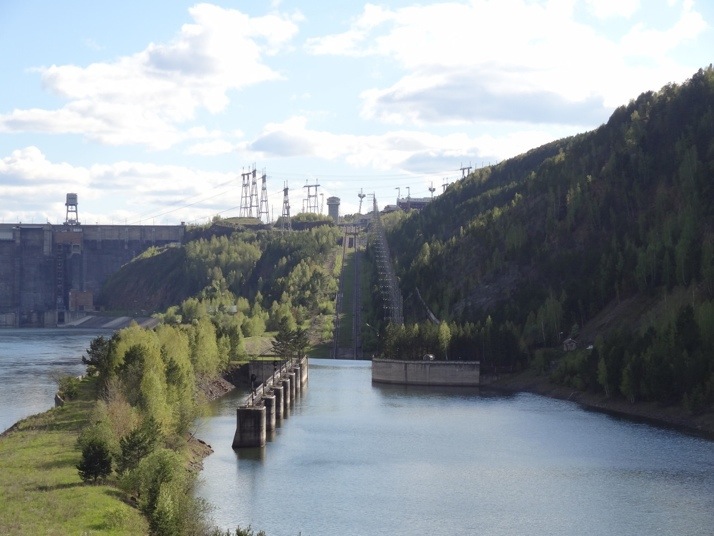 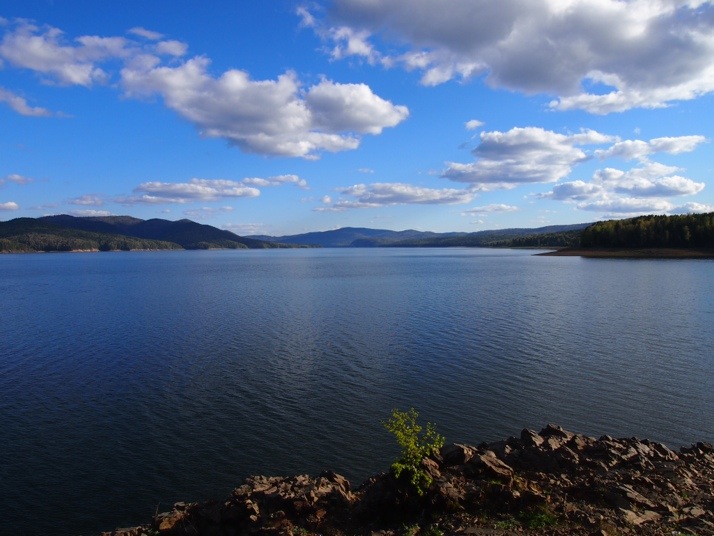 Thanks to Anatoliy and Marius we not only had an excellent day of sightseeing, but very interesting conversations ranging from 20th century Russian politics to game hunting in South Africa!