Suzhou is situated on the banks of the mighty Yangtze River and is a city of canals. Also dubbed the ‘Venice of the East’ although we’ve travelled through several alternate Venices by now (St Petersburg, Bangkok, …) and none of them are even close to having the same atmosphere as the real thing. 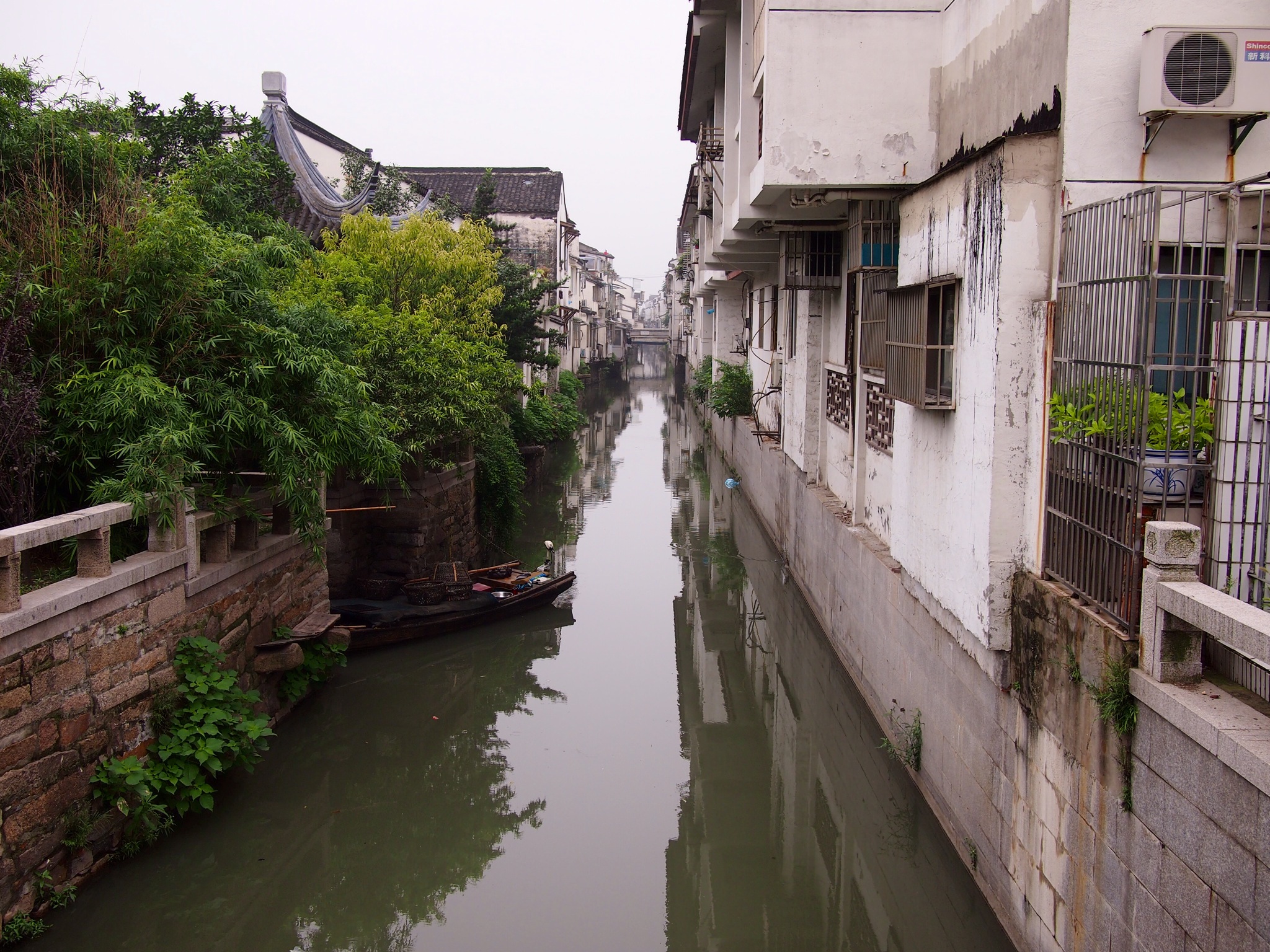 Not a gondola in sight…

Suzhou is famous for its classical Chinese gardens, nine of which have been inscribed on the UNESCO World Heritage list. Unlike the imperial parks of the Forbidden City and Summer Palace in Beijing, these were private gardens, built by wealthy men and intellectuals and designed to recreate natural landscapes in miniature. A miniature landscape, rocks, trees, water and small pavilion in the Master-of-Nets Garden

The Humble Administrator’s Garden originally dates from the early 16th century and is the largest of the remaining gardens in Suzhou. At first we though it wasn’t actually so big but it’s full of twisting paths and little buildings so that you can actually get lost. It is cleverly designed so that beautiful vistas open up across the garden at various spots, some even use the technique of ‘borrowing’ scenery, something that we also saw in Japanese gardens. Here, for example, looking across to the North Temple Pagoda: 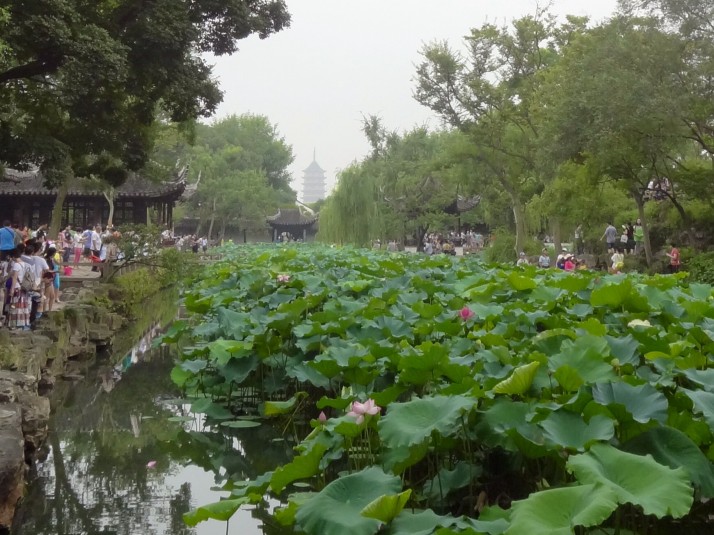 It was a hazy day, but you can see the pagoda at the end of the lotus pond (it’s actually 0.5km away from the garden

Like many of the buildings in this and the other gardens, the name comes from Chinese literature. The garden was first laid out by Wang Xianchen when he retired from public life as an imperial envoy and poet. He was inspired by a quote from an essay titled ‘Staying at Home Idle’:

After Wang died, his eldest son lost the garden to pay gambling debts and it was split and changed hands several times in the following centuries before being reconsolidated by the government in 1949. 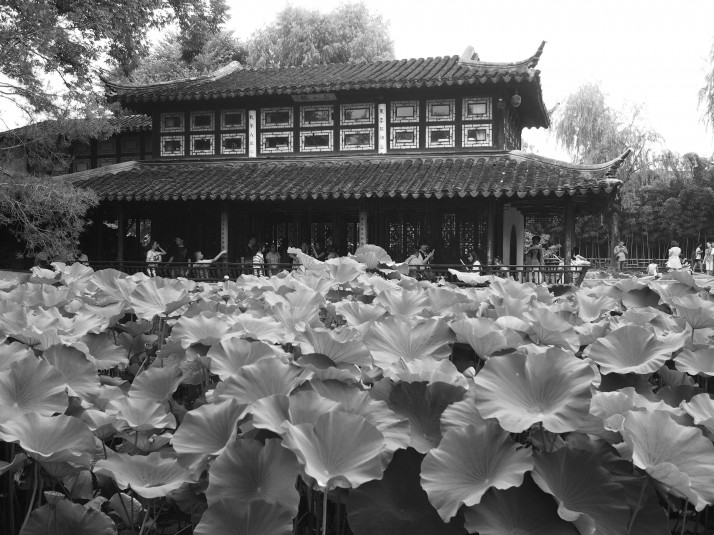 I’m sure it would be a wonderful place to relax on a quiet day but when we visited it was absolutely overrun with tour groups. Chinese tour groups are like an extreme version of a normal tour group; 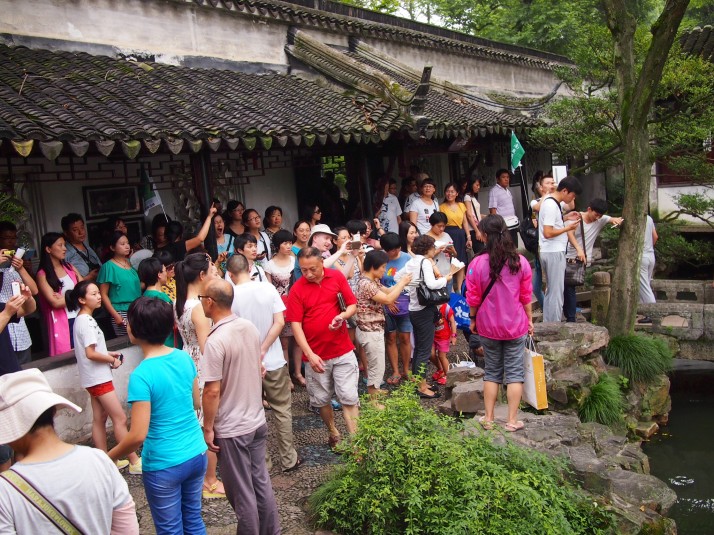 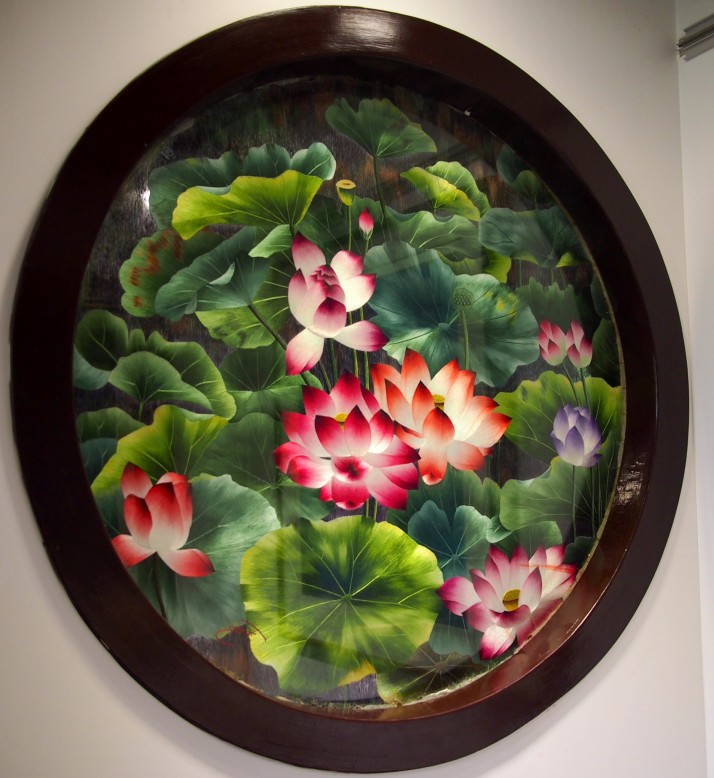 The House of Sweet-smelling rice contained an exhibition of stunning embroidery by a local craftswoman, Haiyun Zhou

At the far end of the garden is a space given over to hundreds of bonsai trees. This section wasn’t quite as packed as the other areas of the garden and we enjoyed seeing the variety of different trees which had been miniaturised, and some of them had some forming wires in place to shape their branches. 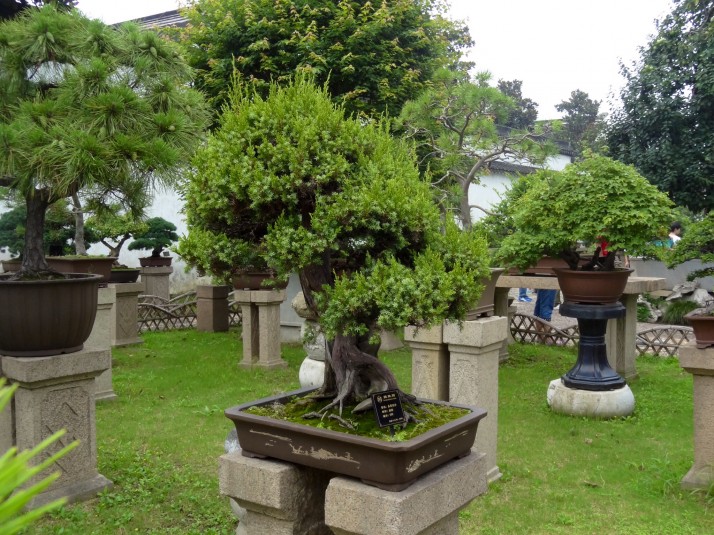 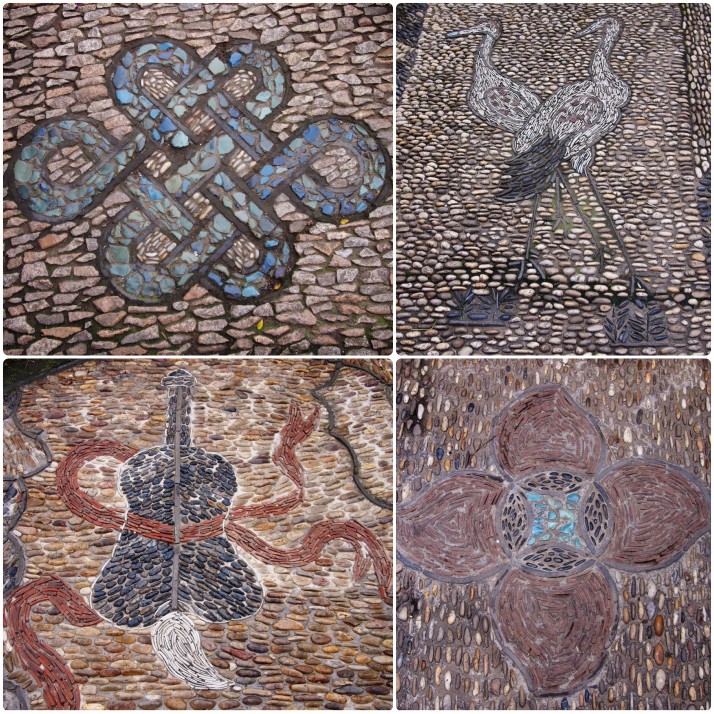 I really liked spotting the patterns of stones in the paths 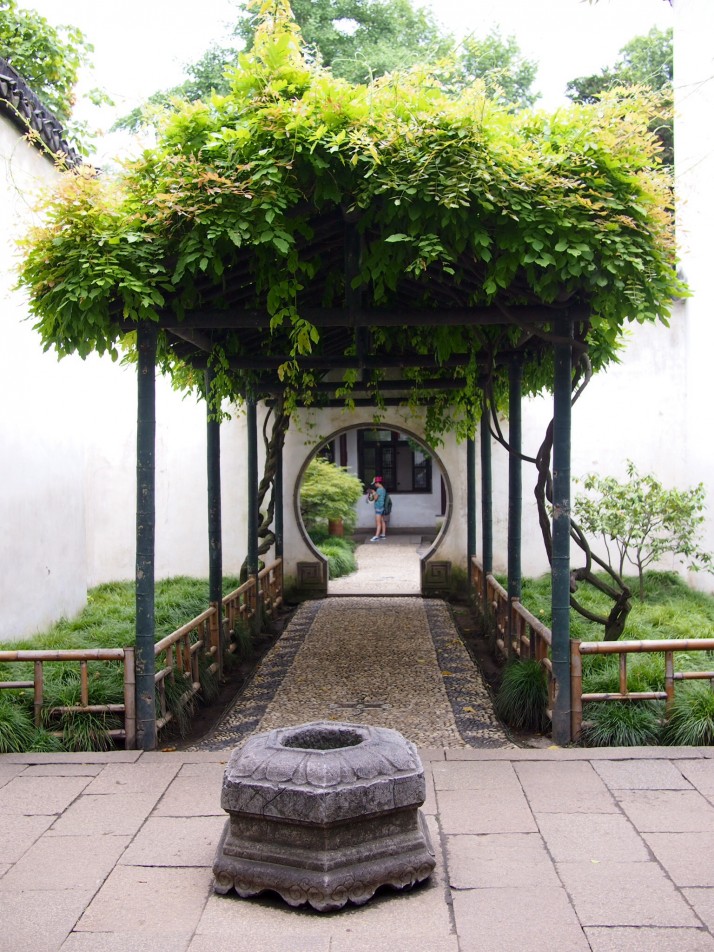 A rare quiet moment in the Humble Administrator’s Garden

Having learnt our lesson from the day before we were determined to get to the Master-of-Nets Garden as early as we could to minimise the crowds. The garden opened at 7.30am but with a one hour walk from our hotel the best we could manage was 8am. It paid off, we weren’t the only ones there but it was a much nicer and more enjoyable experience. 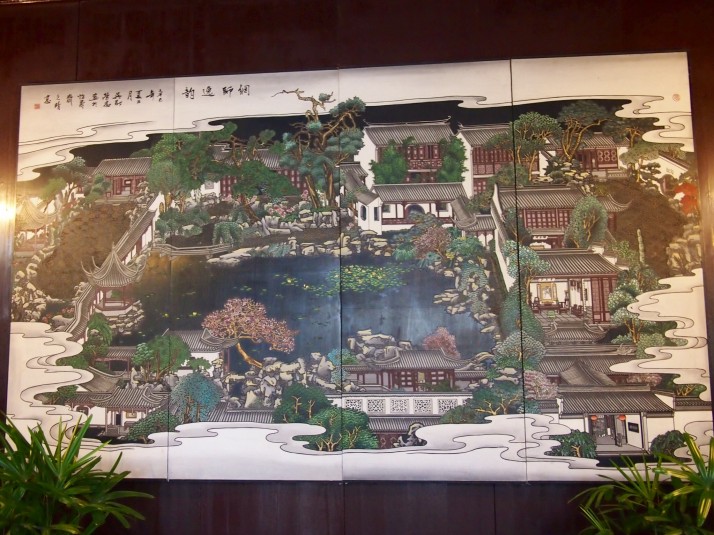 Plan of the Master-of-Nets Garden in tiles

In the centre of the garden is a pond surrounded by the living quarters of the former residence which are linked by courtyards and covered walkways. 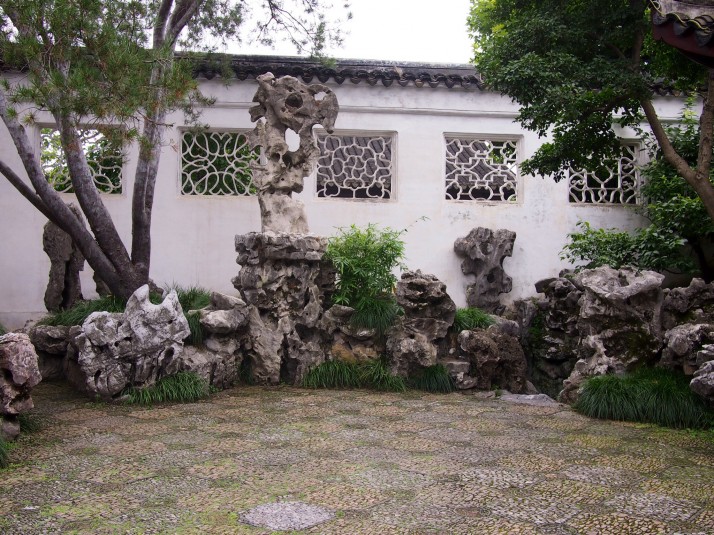 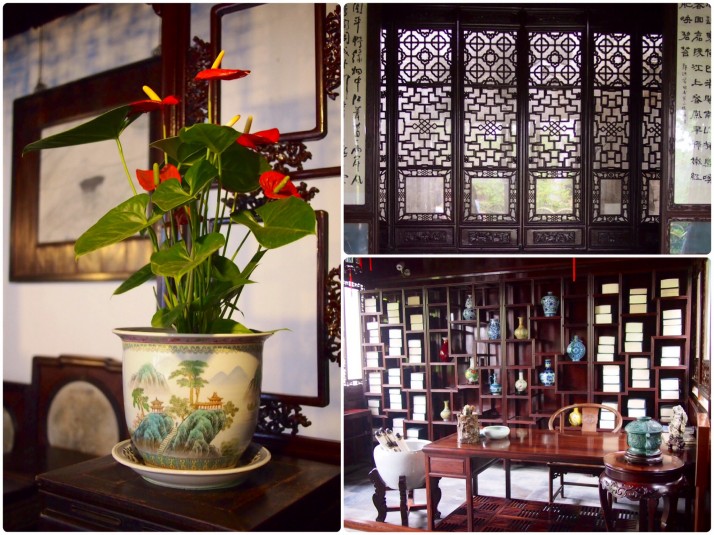 Building interiors (clockwise from left): pot plant in The Beauty Within Reach Tower; window in The Watching Pines and Appreciating Paintings Studio; The Peony Study Reflection of The Prunus Mume Pavilion in the garden’s pond Looking across the pond from The Leading to Quietude Bridge

For a city with some major tourist attractions, Suzhou is remarkably lacking in signage (in either Chinese or English). We stumbled across the entrance to Canglang Pavilion when we got lost on our way to the Master-of-Nets Garden and, as it was close by, we returned on our way back to the hotel. It is the oldest of the existing gardens in Suzhou dating from 1044. The name can be translated as Great Wave or Surging Wave Pavilion. 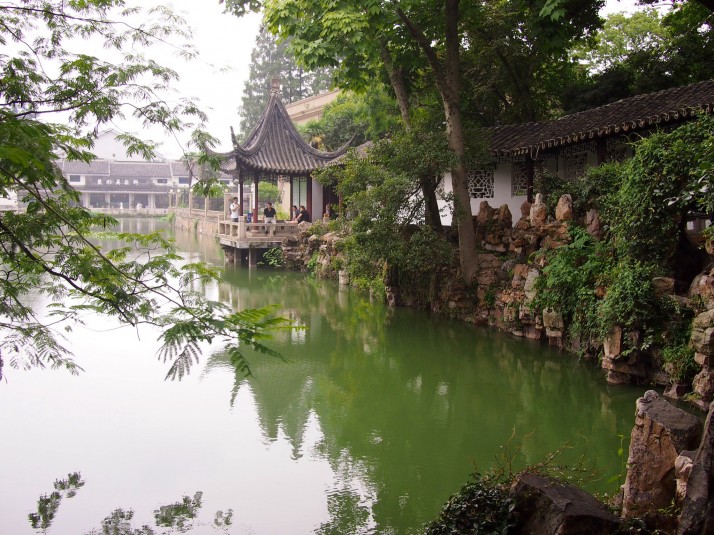 Situated on a small hill in the centre of the garden is the eponymous pavilion, a popular place for a rest and a picnic An old and twisted tree outside The Pure Fragrance House

Our favourite of the gardens that we visited was the Master-of-Nets Garden for its clever layout and rock gardens. I’d really like to visit Suzhou again in other seasons, I think the gardens would feel quite different and that the most memorable views would be transformed by a covering of snow or brightly coloured autumn leaves.