When we were in Mongolia we made friends with two French couples. Thomas and Jess were on our tour to the Gobi desert, and their friends Max and Armelle met up with them afterwards and then were in Beijing at the same time as us. As often happens when you get on well with someone on the road, details and invitations to “come and stay if you’re passing our town” were swapped. After our stay with Heidi and Olivier in Switzerland, the south of France seemed a logical direction to proceed and so we invited ourselves for a visit…

Max and Armelle live near Aix-en-Provence (that’s pronounced ‘eks’ like X), a pretty town in south-eastern France. We had the Friday afternoon to explore the historic centre before meeting them for dinner. The food was excellent and we were amused by the amount of discussion with the restaurant manager over the choice of wine (much longer than was taken over the food!). Max assured us that it wasn’t usually so long but I think we’ve got them rumbled… 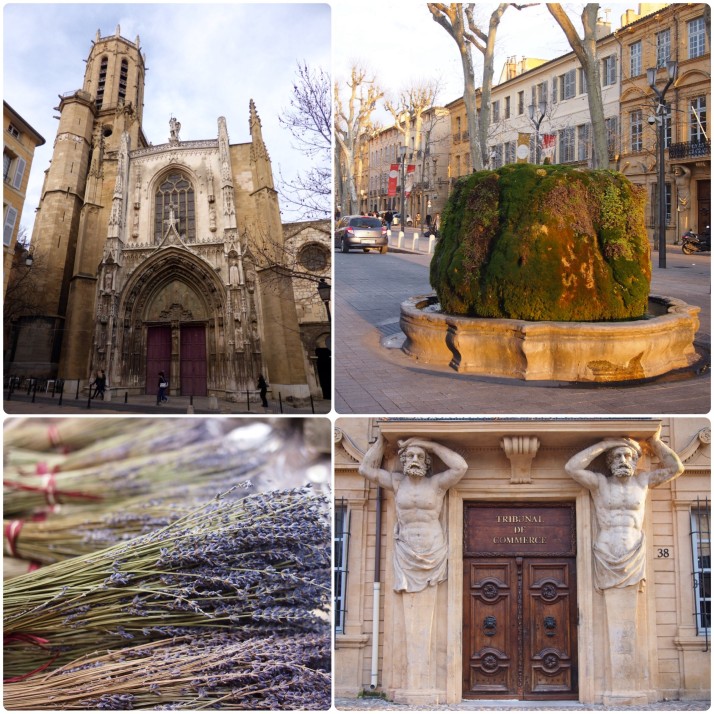 Aix-en-Provence (clockwise from top left): Cathedral of the Holy Saviour; this fountain on Cours Mirabeau is fed by a hot spring hence the thick covering of moss; the historic centre is full of elaborate doorways; lavender is a popular product of the Provence area

The following morning we set out on a clifftop hike around some of the calanques on the coast south of Aix near Marseille. These steep sided inlets into the limestone rock are a unique feature of the Mediterranean coast. The path was pretty steep at times but the views were beautiful and it was nice once again to be out in the sun and fresh air. 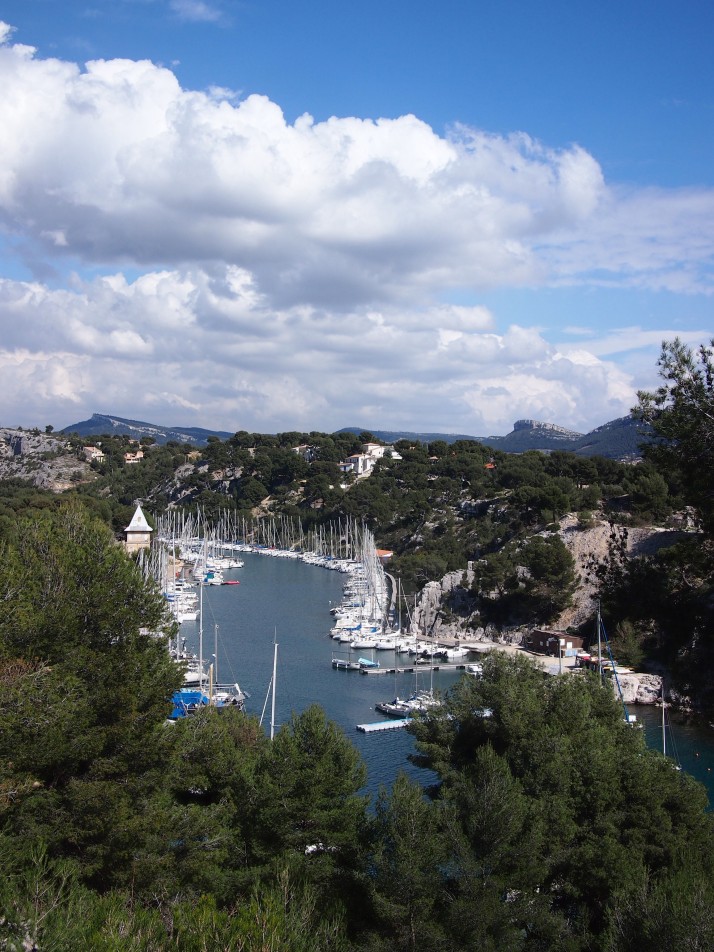 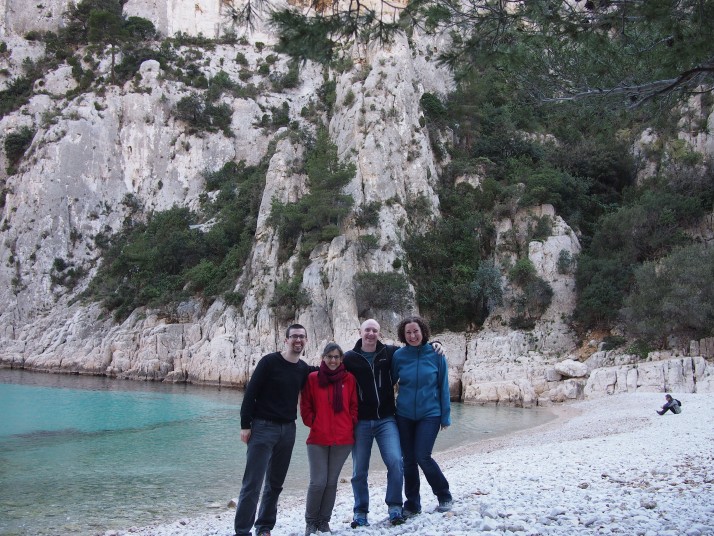 Max, Armelle, Andrew and I on the pebbly beach beside Calanque d’En Vau

Next day the weather wasn’t so good so we had a relaxed morning, a leisurely Sunday lunch and a short walk before going to the cinema to watch ‘Citizenfour’, the documentary about Edward Snowden and his path to making the revelations about government surveillance. Even knowing the story we found some of it was very shocking and it’s definitely worth a watch if you get the opportunity. 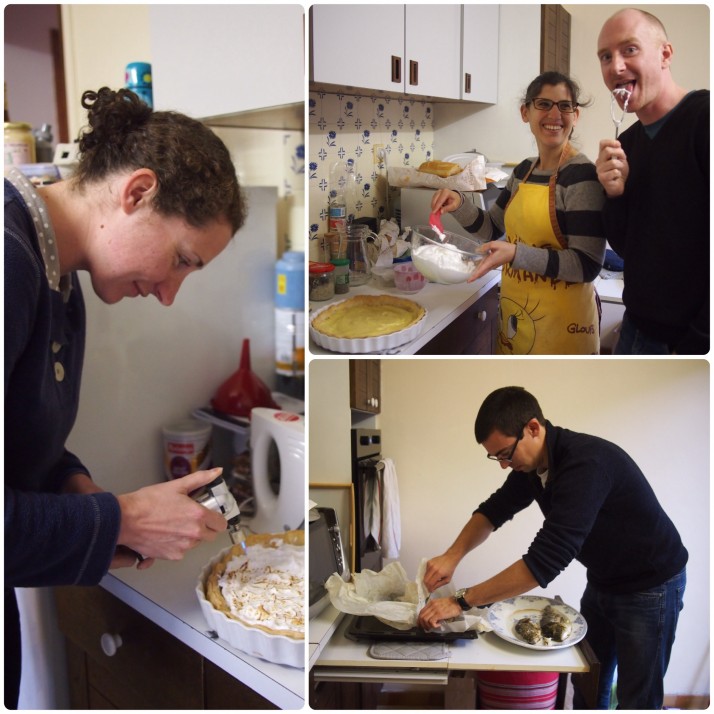 Next stop was the small medieval town of Carcassonne. Being big fans of the board game we had to check out the real place. We thought that we’d taken just about every possible mode of transport during our two years on the road, but getting to Carcassonne added to the list. The train links from Aix-en-Provence are not very direct and Max recommended that we look into car sharing where you pay for a seat in the car of someone already doing the journey. It turned out to not only be faster but also much cheaper. 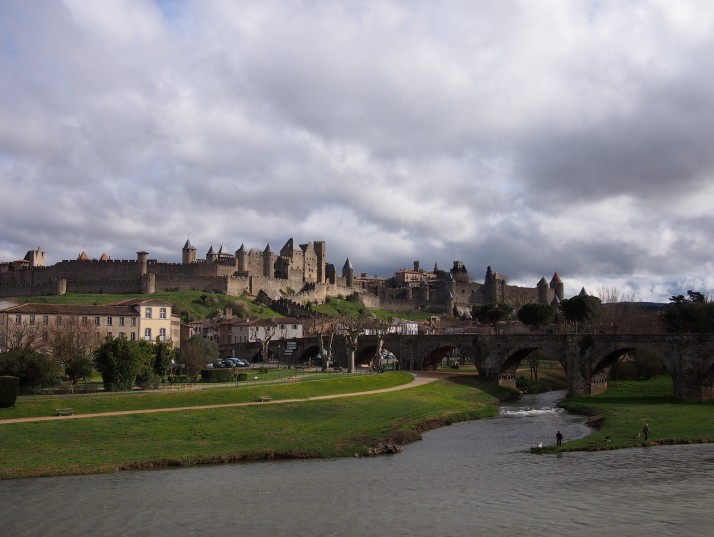 The old walled fortress known as La Cité appears to be almost completely medieval, but what we see today is largely due to heavy restoration works carried out in the 19th century. We enjoyed wandering the quaint streets, spotting details like wall plaques and nosing around in the heavily tourist oriented shops. Across the River Aude lies the less old but still historic Bastide area which was a walled town in its own right formed in the 13th century. Chateau Comtal is the castle within the fortress city 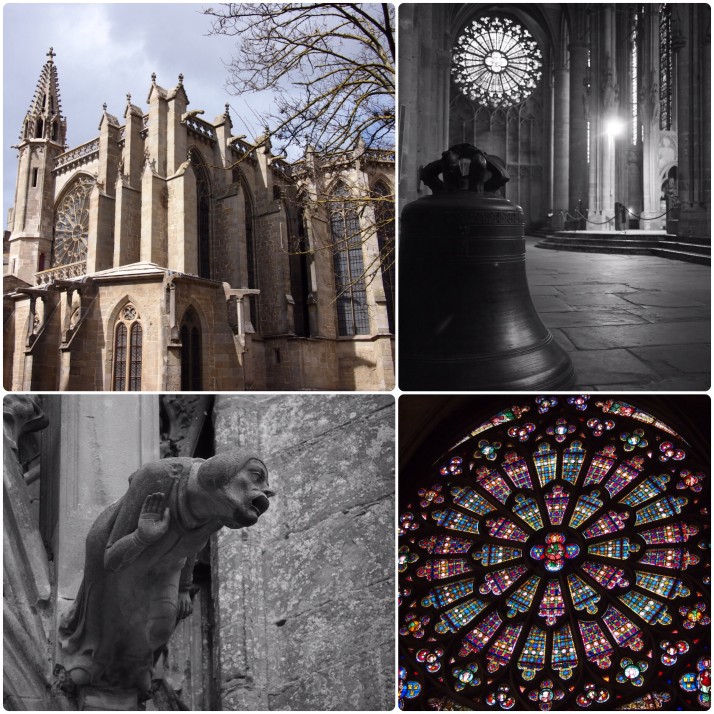 Carcassonne’s gothic former cathedral in La Cité, Basilica St-Nazaire, is small but filled with stained glass and decorated on the exterior by ugly gargoyles

Because the town is so small it was easy to get out into the countryside and put some miles under our boots. We did a very long round trip walk to the Lac de la Cavayere, past still sleeping vineyards but with the lanes lined with blossom, spring was definitely in the air. The lake is artificial and obviously heavily used for water sports in the summer but we saw practically no one else and found it a peaceful place to stroll around. 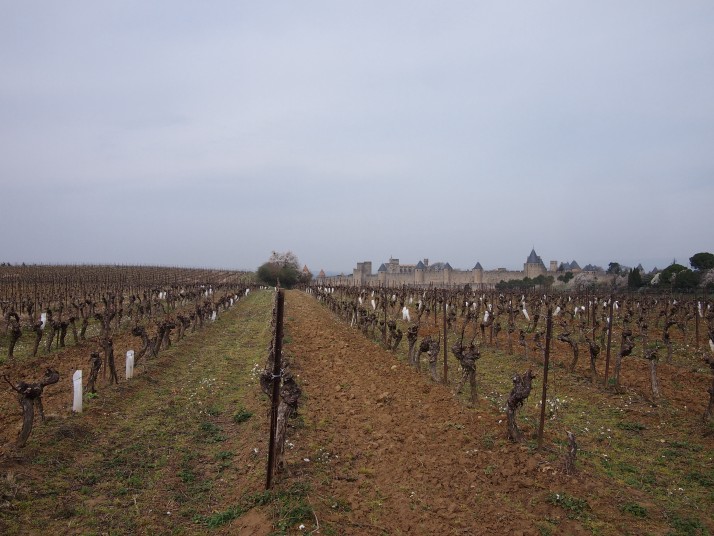 Looking across a vineyard towards La Cité

From Carcassonne it is a short hop to Toulouse. Known as the ‘Pink City’ because of the distinctive colour of its many brick built buildings, it is also the home of our friends Thomas and Jess. The ‘Pink City’ (clockwise from top left): Basilica of Saint Sernin; even the half-timbered buildings are pink; the magnificent Capitole is home to the town’s government; Place Saint-Étienne

After a first evening spent catching up and sampling Aligot, a kind of extra cheesy mashed potato that can be pulled into very long strings when it’s hot, and yes it is just as tasty as the description sounds, we headed into the city for a walk around its sights. We began on the top floor of the Galeries Lafayette department store for a bird’s eye view of where we would be walking… With Jess and Thom beside the River Garonne, with La Grave Hospital in the background

We weaved through the picturesque streets passing both of the city’s UNESCO World Heritage sights, the Basilica of Saint Sernin where we also caught part of the organist’s practice, and the Canal du Midi which runs from Toulouse to the Mediterranean Sea. By the time it started to rain in the late afternoon we’d covered a lot of ground and were ready to collapse into the corner of a well chosen bar to watch the England vs France Six Nations game. Thom is a big rugby fan (and player) whereas we didn’t even know who the favourite was, nevertheless it was a very exciting game with lots of tries, though we kept getting distracted by the highly amusing drunk man on the next table who kept asking us questions and promptly forgetting the answers! 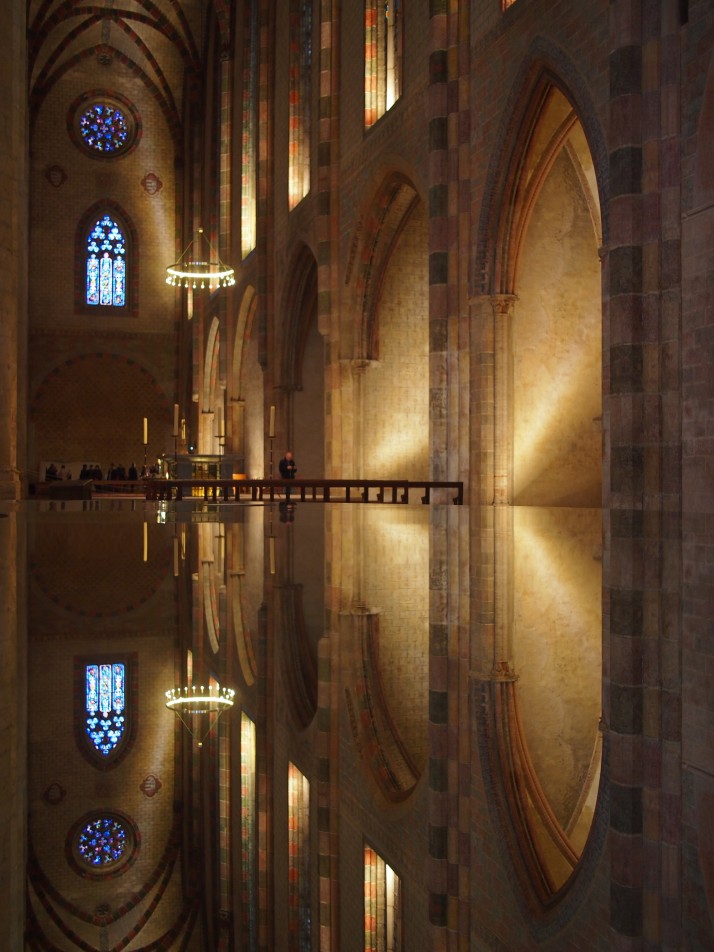 Reflections inside the Church of the Jacobins. A mirror is installed around one of the pillars to make looking at the ceiling easier

Our timing was impeccable not just for the rugby but also because the Toulouse Exhibition Hall was hosting a Salon Vins et Terroirs, a big wine fair. We rented a glass for a euro and then went around the different stalls tasting the wines. Ostensibly it’s so you can decide whether to buy or not but no one takes your credit card details so we had a merry old time guided by Thom whose wine knowledge is far superior to ours. As an added benefit, a quarter of the hall was taken up with artisan food producers so we bought some meat and cheese plates to make a picnic of it. Heaven! Cheese, meats and samples of red wine at the Salon Vins et Terroirs

Paris is the most logical northwards step from Toulouse but we’ve already been there and, much as we love the city, we fancied something different. There is a slow but direct train north-east to Dijon and we read that it was an interesting place so we bought tickets. When Max heard our plans he was really pleased as Dijon is his hometown and when he found out we hadn’t yet arranged accommodation he promptly rang his parents to see if they could host us. Serge and Edwige not only graciously agreed to allow two almost strangers to stay in their spare room but also fed us extremely well and gave us lots of information on what to see in the town. 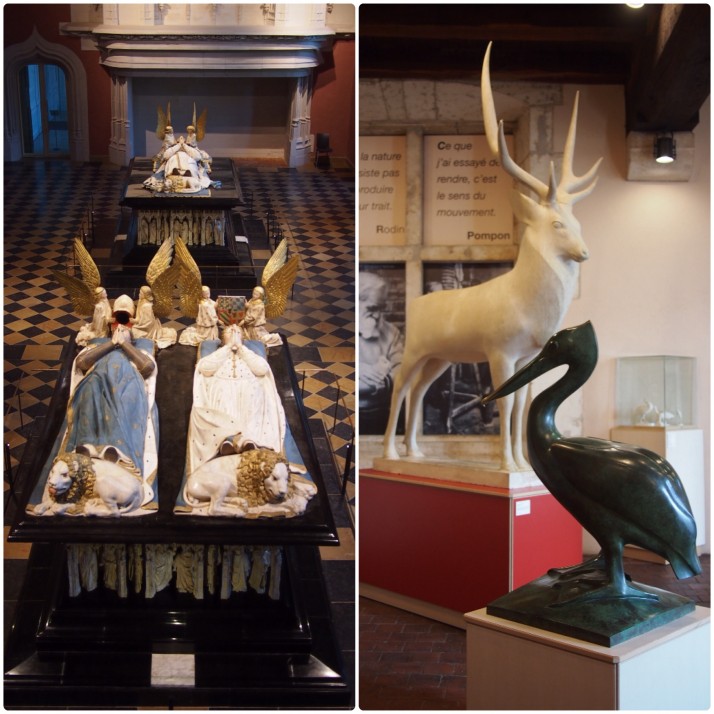 Dijon’s Museum of Fine Arts is one of the oldest museums in France but has been recently refurbished and it shows. The exhibits are well placed, the information boards are useful and it’s an all round pleasurable experience for a half day visit. The first few rooms are themed around the Dukes of Burgundy who lived in the palace which now houses the museum, after that there’s a bit of everything with a highlight for us being the animal sculptures by François Pompon, a Burgundy born sculptor who lived a century ago despite the modern look of his works. Dijon’s market building on the afternoon before market day

We’d fortuitously planned our visit over one of the market days (held on Tuesday, Thursday, Friday, and Saturday) and you know how much we like markets. The market building, called Les Halles, was designed by local boy Gustave Eiffel (he of the famous tower) and a few years ago was slated for demolition by the local council until a massive outcry from residents earned it a restoration instead. We’re very glad as it was a fascinating place to walk through, full of fresh vegetables, meat and fish, cheeses, cooked meats and baked items. We picked up a baguette and some of the local specialty jambon persillé (ham terrine in a parsley jelly) for our lunch. 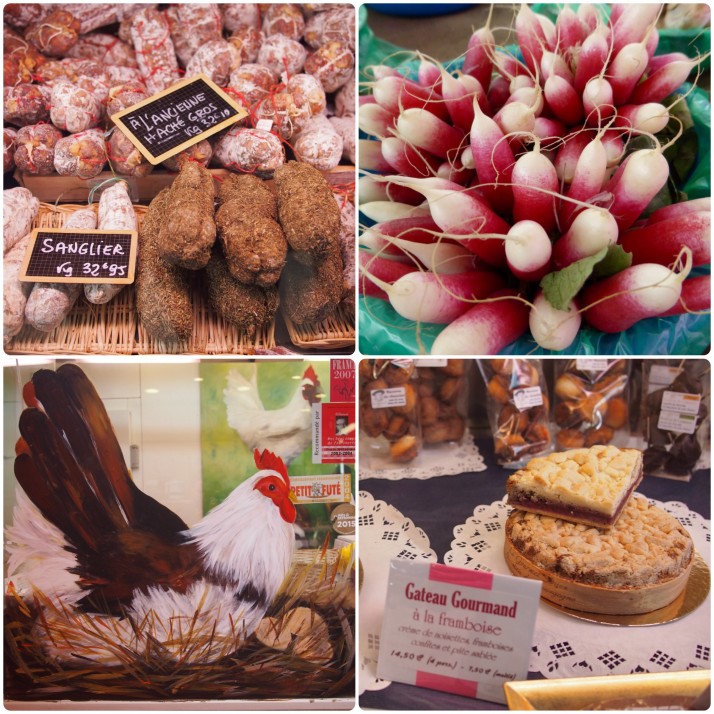 After the market we picked up the ‘Owl’s Trail’, an enjoyable walking route linking the town’s most significant sights. It’s named after an owl carved into the external wall of the Notre Dame church. The ‘Owl’s Trail’ – a pavement marker and the statue that the trail is named after, it’s good luck if you touch it with your left hand and make a wish 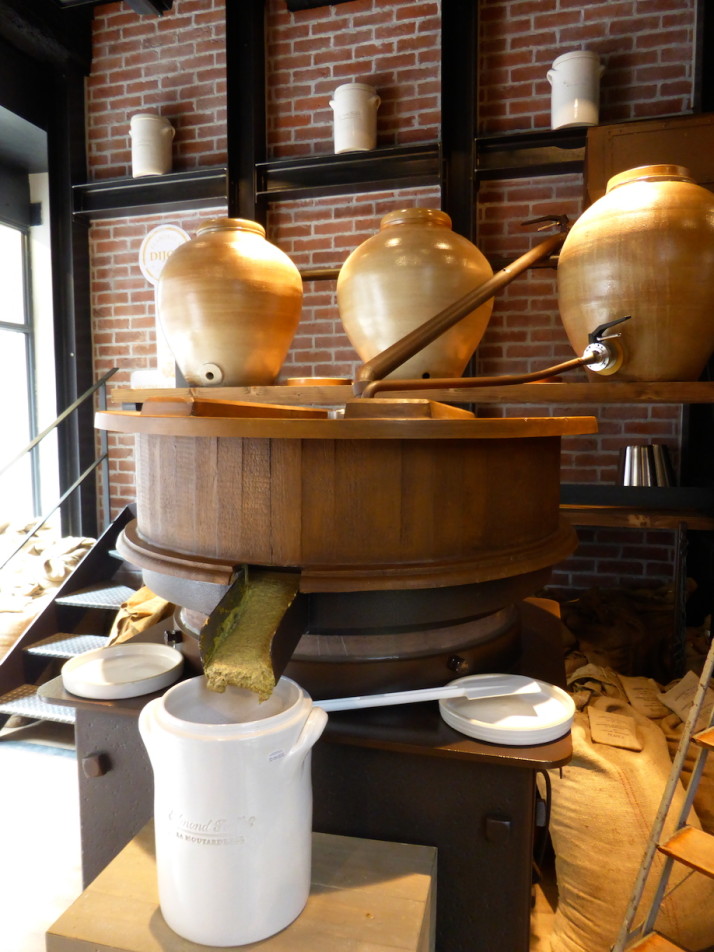 It wouldn’t be a visit to Dijon without mustard. The Edmond Fallot shop had a production machine set up as well as tasters of traditional Dijon mustard and all kinds of strange flavours, from pain d’epices (a bit like gingerbread) to cassis (blackcurrant liqueur)

It felt like a bit of a whistlestop tour but we both really enjoyed exploring some of France away from the capital city. From Dijon, we’re ready to move on to our fourth country this month!